I watched a promotional video that WoW put out, in which the narrator (I think I recognize Leslie Sacks’ voice, but I am not 100% sure) expresses her frustration that there are rules at the Kotel that need to be followed- in her words that there are things that are “Assur (forbidden) and assur and assur” at the Kotel (approximately 2:30 into the video). I can understand her frustration that there are rules there that forbid doing things that she and others really want to do.

I went to the beach recently with my family. We wanted to have a barbecue on the beach. Barbecues on the beach, after a long day splashing in the sea is one of my favorite things to do. Its something I look forward to doing whenever I go to the beach, to share this wonderful experience with my family. Good food, refreshing water, a nice breeze if the BBQ is in the evening- what more can you ask for on a fine summer day?

We brought along our grill, coals, a starter, chicken, hot dogs, buns, etc… not to mention all the yummy sides for our dinner- cold, crisp watermelon, grapes, potato salad, etc…

To our chagrin, when we arrived at the beach, we saw there was a big sign up at the entrance with a list of rules. Prominently among them- the first rule actually- it is absolutely forbidden to have a BBQ on the beach.

The more I thought about it, the more upset I became.

Why was there this rule? Who exactly was I bothering by having a barbecue? The first thing that came to mind was “Zeh nehene vizeh gam lo chasser”- “This one benefits, and that one isn’t getting hurt.” (A phrase used in the Gemara.)

When I have a BBQ on the beach with my family, we enjoy ourselves and have a great time. And no one else is getting affected.

And if people don’t like seeing, smelling, or hearing a barbecue, they could move further down the beach. The beach is big enough for everyone.

That’s the rule. No barbecue on the beach. No ifs ands or buts about it. No matter whether or not my family and I are disappointed and bummed out.

Why? My only guess is that it does bother people. Even if I think it shouldn’t bother people, even if I think there’s nothing problematic or disturbing whatsoever about barbecues on the beach, and that if someone does have an issue with it, they should just get over it or move over… Even so, that is the rule. And as a respectful law abiding citizen, I know that we have to follow the rules designated in places, even if I don’t think the rules are normal, and even if I think that those who made the rules shouldn’t have the authority to make such rules.

And so, instead of making a scene, instead of flouting the rules I felt were stupid, I just kept these thoughts inside my head and followed the rules. We didn’t have our barbecue on the beach. C’est la vie.

I wonder how much of what I said about my frustration about what happened at the beach can be applied to the frustration many people have at the Kotel.

Yes, wearing a tallit and tefillin and having Torah reading on the women’s side at the Kotel is something that is important to them, and they are incredibly frustrated about the rules against it, put in place by the government body- the Western Wall Heritage Foundation (the same way the city council of Herzelia is a government body). They don’t understand why their doing these things should bother or affect anyone else, and feel that if people are bothered, they should just either get over it, or move away, or leave.

Would the Women of the Wall support breaking the rules about no BBQ at the beach, even if it bothered other people there despite not understanding why it would possibly bother others, and fighting for the rules to be changed at the beach? Or would they respect and follow the rules there, even if they ticked them off?

Interestingly, Hillel Halkin, a secular Jew, who personally hates wearing a kippa and especially being told to wear a kippa, wrote in this piece (in which we don’t condone his tone or language) that he anyhow dons a kippa at the Western Wall, and would never support people pushing to stop there being a requirement for men to wear a kippa there.

Sara Yocheved Rigler, a wonderful and loving traditional Jew, with a rather colorful background, shared part of her story at the Kotel last Rosh Chodesh. She said that when she was at an Ashram in India, she wore a sari. Everyone there wore a sari. Even though there were no rules requiring it. It’s because of the respect for the feelings of the other worshipers there.

At the Vatican, there are rules forbidding people from entering immodestly dressed, and people are denied entry unless they comply to the rules. This being despite the fact that Catholic rules do not require people to follow the same modesty rules required at the Vatican in their daily life. 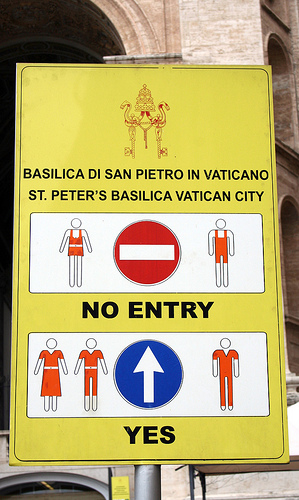 When people go to Muslim countries, they cover up, even if they wouldn’t do so in their regular life, like you see in this picture of Angelina Jolie in an abaye while visiting Pakistan.

Why do people have such a hard time respecting the sanctity of the Kotel? Why do people follow the rules and respect others everywhere else, but when it comes to the Kotel, they feel that no one, not even a government body, has a right to make rules telling people what to do and what not to do?

But rules are rules, and rules aren’t meant to be broken, even when they annoy us.

Why is it so hard to follow the rules there, respecting the decorum in the place? If you really feel the need to wear your tallit, and tefillin at the Kotel, singing out loud and having kriyat Hatorah, why can’t you do it at the Kotel Hakatan or Robinson’s Arch, even if it isn’t your first choice?

I didn’t either want to have my barbecue in the park, I really wanted it on the beach, but we followed the rules that I hated and did it elsewhere.

C’est la vie. Not everything in life always happens the way you want it, and not all rules are rules we think are fair.

About the Author
Adara Peskin is a non conformist chareidi feminist single mother of 4 living in Kochav Yaakov, activist for mental health awareness, blogger at PennilessParenting.com about living a life with mindful spending, and foraging instructor, attempting to make a kiddush Hashem every day via her interactions with others.
Comments