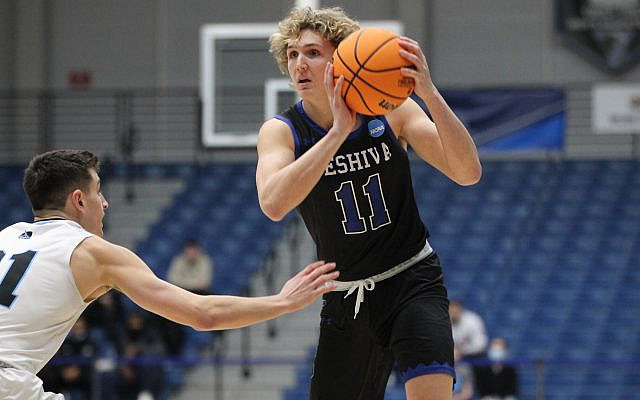 When I was in grade school, I was a huge baseball fan – and like thousands of other youngsters my age, I dreamed of becoming a professional baseball player.

Unfortunately, those hopes were quickly dashed, as I was told that there was no way a baseball player could be shomer Shabbat and compete in the big leagues.

Forget the fact that the odds of making it to the major leagues based on my ability was about one in a gazillion; it wasn’t even a remote possibility if I were to remain true to my faith.

Fast forward 50-plus years.  Ryan Turell, who played on Yeshiva University’s basketball team and was named the 2022 Division III Player of the Year, was selected in the G-League draft by the Detroit Pistons and recently played his very first professional game for his new team.

While playing in the G League does not guarantee a spot in the NBA, it means Turell could be called up by the Pistons to replace an injured player midseason.  Which is a pretty exciting possibility!

Even if he never does play in the NBA, he has achieved what most people never dreamed a shomer Shabbat ballplayer could accomplish.

Turell has said that the Pistons organization has generously accommodated his religious observance, which was very heartening to hear.  The team’s first game was played on a Friday night.  Because it was already Shabbat, Turell walked back to the hotel after the game. And because Turell would be staying behind the next day when the team returned to Detroit, he was provided with four kosher meals and a hot plate — and had a separate ride home arranged for him after Shabbat was over.

Although most observant Jews are thrilled at Turell’s accomplishment, and are delighted that he has been able to pursue his dream of becoming a professional basketball player while maintaining his faith, not everyone in the Orthodox community is happy with his decision.

Some folks feel that a real kiddush Hashem would have been created had Turell refused to accept the offer to play in the G-League, placing Shabbat observance ahead of his professional desires.

Others have questioned whether playing basketball on the Sabbath, even if he is not driving to and from the game, is halachically permissible.

I don’t know if Turell asked an Orthodox rabbi about the permissibility of playing ball on Shabbat, or whether he came to his own decision about what he felt comfortable doing.  Frankly, that’s none of my business – or nobody else’s business either.

What I do think this story demonstrates is the challenge that we as Modern Orthodox Jews face, as we balance the needs of our professional careers with our commitment to religious observance and halacha.

Although we may not face a decision quite as dramatic as the one Turell made to pursue a career as a professional basketball player in the NBA, many of us have had to deal with similar professional dilemmas – and have figured out ways to navigate the situation while still acting within a halachic framework.

I know individuals who have had late Friday afternoon meetings at their offices in December and January – and have chosen to stay for the meeting, and then walk two or three miles to their apartment after Shabbat had started.

I know others who have chosen to attend professional conferences that were held over Shabbat – and chose to stay at a hotel and participate, while making sure not to write or perform other acts that would be considered halachic work.

I know students who have attended secular colleges, who have chosen to attend classes without taking notes on Sukkot and Shemini Atzeret, as they felt they could not miss additional classes after already taking off three days for Rosh Hashana and Yom Kippur.

If these situations happened to people who lived in the Haredi world, the solution would be easy – Shabbat would trump any professional or educational needs.  In fact, those in the Haredi world would in most cases not place themselves in a position where they were forced to make such choices.

But as Modern Orthodox Jews, we believe we can pursue our professional and educational careers, while still living a life committed to halachic observance.  In many cases, this has been made easier for us – most employers and universities recognize the unique requirement Orthodox Jews require, and have made many accommodations for kosher food and Sabbath observance.

Still, there are occasions where we may be faced with a conflict – and we are forced to decide how best to work out the problem.  In some of these cases, we may decide there is no way we can participate in an activity and still be faithful to halacha.  But in other cases, we can often find creative ways to manage the situation – and integrate our professional and educational desires with our commitment to halacha.

In fact, that is what Turell has successfully done.  He has not given up on his dream of playing professional basketball, and has figured out a way to still commit to an Orthodox life.  It certainly helps that his new employer has been very accommodating … I’m not sure every basketball organization would have acceded to Turell’s unusual requirements.  I’m delighted he has been granted this opportunity.

But what might be the most impressive part of this story is this: no longer will youngsters in Jewish day schools with a dream of becoming professional sports athletes be told that they cannot play because they are shomer Shabbat.  For that alone, Ryan Turell has made an enormous contribution to the Orthodox world.