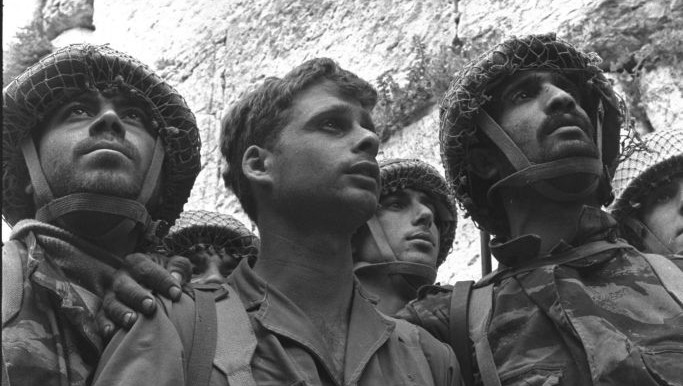 Paratroopers at the recaptured Western Wall (Times of Israel)

There is a famous picture, you’ve probably seen it, of a group of young men, Israeli soldiers, gazing up, with a look of awe on their faces. They are in a place where no Jews had been for the past 19 years, a place which Jews have been turning towards, singing about, and dreaming of for nearly 2000 years. At the moment the picture was taken, those men were starting to realize that the place they were in was once again in Jewish hands. They are at the retaining wall of the Temple Mount, the place known as the Kotel. I can’t think of another single place that is treated with more reverence among Jews, or that has such a hold on us. It is a place that, in other words, is sacred.

When I think about sacred space in Judaism, I tend to hear the great rabbi and philosopher Abraham Joshua Heschel whispering in my ear. You may be familiar with Abraham Joshua Heschel’s beautiful work “The Sabbath,” where he argues that Jews mark holy time, not holy space. Shabbat, he says, is a palace in time. For those of us who celebrate Shabbat and holidays regularly, and who find those times spiritually nurturing, that message may resonate. No matter where we are, the distinct texture of time helps us experience holiness as we move through the week and the year. 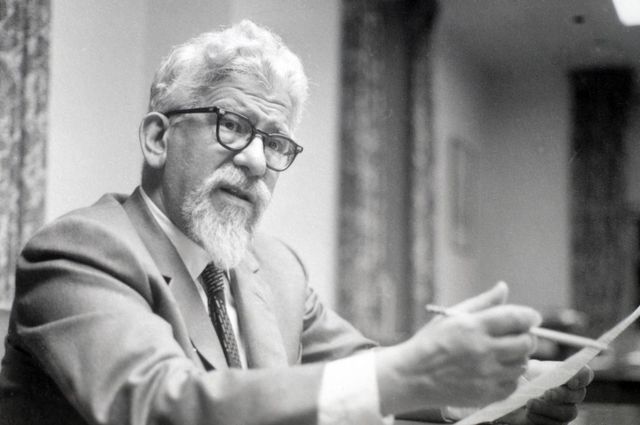 Furthermore, one of the great innovations of Rabbinic Judaism, the innovation that allowed Judaism to survive after the destruction of the Temple in the year 70, was the idea that we don’t need any one particular space in order to celebrate Judaism. We can practice Judaism, form communities, and worship God wherever we go. The sense of connection to God that people once felt in the Temple is something that we access instead through prayer, through our ritual observances, and through the festive meals that we share with each other. The rabbis make this explicit, imagining the Shabbat table as taking the place of the altar that was once in the Temple, and calling our homes a “Mikdash Me’at,” a miniature tabernacle.

And yet, I think we all intuitively understand that we feel different in different spaces. There is a Hasidic story about a child who went to the woods every afternoon to pray. Their teachers and parents always used to seek them out to bring them back inside, and once, the child’s parent asked, “Don’t you know that God is the same everywhere?” The child responded “God is the same everywhere, but I am not.” 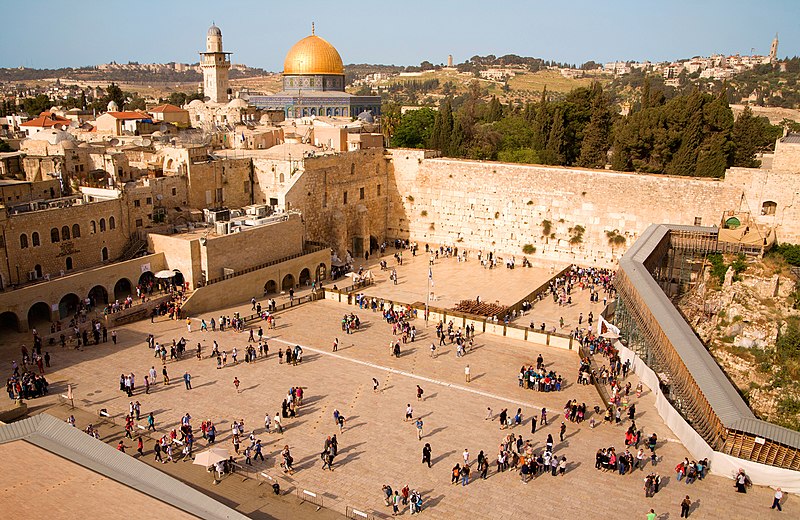 The space we are in does impact us and that is why I, for one, have been quite dismayed to see what has been happening at the Kotel, the retaining wall of the Temple mount, that sacred space where Jews have prayed and turned towards for two thousand years. Before 1948, the Kotel, while considered sacred by Jews, was simply a holy site that Jews would go to and pray at, irrespective of gender or of religious affiliation. Today, however, the part of the Kotel that is most accessible to visitors is, unfortunately, operated as an Ultra- Orthodox synagogue, and one in which the behavior of visitors is tightly controlled. 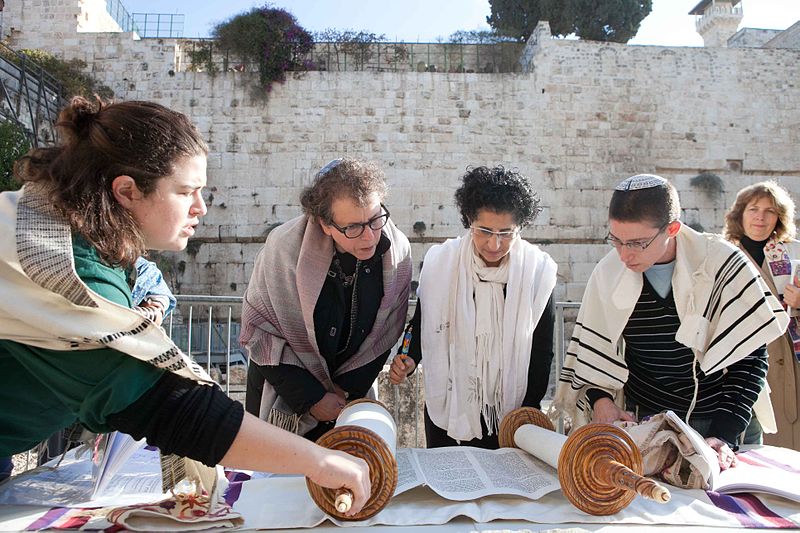 There is a section of the Western Wall which is available for mixed-prayer services. Incidentally, it is a beautiful space that I find to be quite moving, and in it, the history of the space is visible. You can look at the street people walked on their way to the Temple, and see the marks of the shops where people would stop to buy birds to sacrifice. You can see the rocks that fell during the Roman attack in the year 70. That history is all right there. However, the prayer space there is small, and its entrance is not nearly as prominent as the entrance for the Ultra-Orthodox Kotel. In 2017, the Knesset, the Israeli Parliament, voted to enact a compromise which would reconfigure the Kotel plaza with prominent sections for Ultra-Orthodox and egalitarian prayer, each accessed by the same initial entrance. Unfortunately, the plan was delayed and delayed and delayed. One week ago, the Prime Minister of Israel, Naftali Bennett, announced that the Kotel compromise will not be implemented during the tenure of the current government.

Now, you might wonder, why does this matter? It’s just a place. The real things that matter when it comes to religious equality in Israel are the ability for non-Ultra Orthodox Jews to get married, to get divorces, to convert and be recognized as Jews. There are real civil liberties right now that non-Orthodox Jews don’t have, so who cares about access to one spot?

But this current struggle for equality of access to a place hits deeply for many of us because of the deep symbolism involved here. The Kotel is a sacred space for Jews, and therefore by excluding certain groups from praying in that space, the government is making a statement about which kinds of Jews are considered to be legitimate. The Israeli government’s actions are disappointing because they are a lost opportunity to create more sanctity by making the Kotel a place that ties Jews together.

This week’s Parashah, Terumah, in fact, is about the place that served as an antecedent to the Temple in Jerusalem, the very Temple which was on a mount whose retaining wall is the Kotel. Terumah is all about how to build the mishkan, the tabernacle in the desert that traveled with the Jewish people wherever they went. And what is the mishkan? It is a common place around which the Israelites used to gather to mark special occasions. It’s a place where the Israelites can connect to God through sacrifice and maybe prayer. In other words, the mishkan is a sacred space. 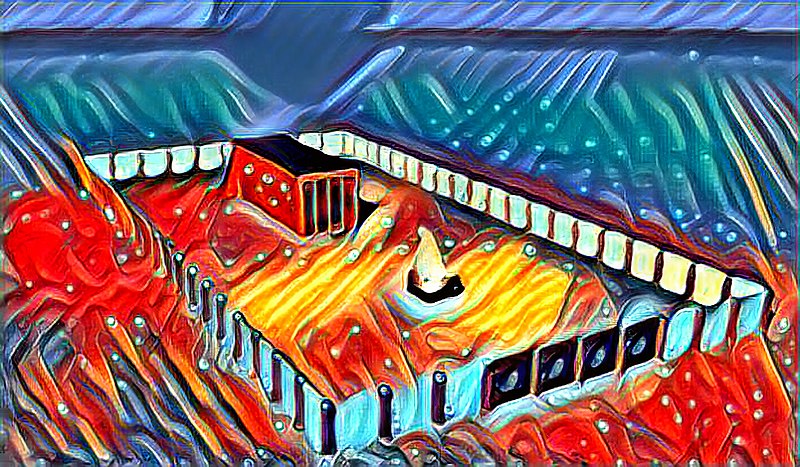 Now the mishkan, unlike the Temple which came later, is portable and temporary, with the people wherever they go. And as I mentioned earlier, an important innovation of Rabbinic Judaism is the ability to worship wherever we are. In every place and in every time, Jews have created spaces in which to do so. An inheritance from living in exile for so many years is that, in addition to our sense that the Temple is holy, or that a tabernacle is holy we also have the sense that each and every community can establish space within which to worship, and that in doing so, we imbue those spaces with holiness. We have many sacred spaces today, and they are sacred because they are the places that allow us to come together. Over the past several weeks, and over the nearly two years of the pandemic, many of us have felt the loss of being able to gather together in one common, sacred, space.

In order for God to dwell among us, we need to do something first, we need to make the space holy. When we take on holy values and behaviors, then the places where we gather to do those things become places where we can sense God’s presence. That is why it feels so offensive when our sacred spaces become the locations of hateful behavior, and why it is so painful to lose access to our sacred spaces.

And that is why it feels so hard to lose access to our sacred space for whatever reason. What is it that we have been missing? Many of us have mourned our distance from Temple Emunah not because our synagogue building is such a wonderful building, which I do think it is, but because of what takes place in that building. We miss the casual interactions, we miss the singing, we miss the togetherness, we miss the things which our building made possible, and which made our building a place where God could dwell. Our building is sacred because it facilitates encounters and connections within our community, and between us and God.

Now when I started thinking about what I wanted to say today, I thought that I would be saying it from our sanctuary, celebrating the first day back in person after over a month of Zoom services. I thought I would be celebrating the return to our sacred space for our community. As it turns out, we were forced to wait yet again due to the ice outside, to insure that nobody would be injured while attempting to return to our space.

But ultimately, no matter where we are, there is a sacredness to this moment, and to this encounter. Zoom, in fact, has served to create sacred spaces for us, spaces where we come together and connect around our shared values and pursuit of meaning. What we do makes a space holy, and we have made Zoom space holy as well.

My hope is that the next time we gather, we will finally have the opportunity for those of us who can, to be present together, in the same space. But regardless of where we are, let’s continue engaging in the actions that make our spaces holy, both virtual spaces and physical spaces. Let’s continue to create holy connections, in any way, and any place, that we can.