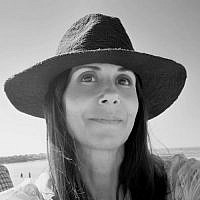 The Blogs
Ilana K. Levinsky
I write what I see
Apply for a Blog
Advertisement
Please note that the posts on The Blogs are contributed by third parties. The opinions, facts and any media content in them are presented solely by the authors, and neither The Times of Israel nor its partners assume any responsibility for them. Please contact us in case of abuse. In case of abuse,
Report this post.

Something quite spectacular happened to me this week. I say this only because, as a writer, I thrive from any opportunity to correlate real-life events to Jewish history. I wish I could say that, while I was busy teaching my son about the upcoming holiday of Yom Kippur, we came across the word “scapegoat,” but that is not the case. It’s a shame too, because we actually first become familiar with this word during Yom Kippur. Derived from the injunction in Leviticus 16:8 that, “Aaron shall place lots upon the two he goats, one lot ‘For the Lord,’ and the other lot, ‘For Azazel,’” it was during Yom Kippur that the High Priest would make sacrifices in order to seek God’s forgiveness for all Jews. This custom required the High Priest to place all of Israel’s sins on two goats; one that would be sacrificed, while the other would be left alive in order to bear the sins of the nation. That goat in turn became known as the scapegoat, the one that was blamed and punished for all of our sins.

Sadly, the truth of the matter is far more prosaic. My eight-year-old son probably heard the word “scapegoat” uttered by one of his favorite online YouTube commentators who drone endlessly about this game or another, rather than during a lesson about our upcoming holiday from his doting mother. So, when he approached me for the meaning of the word, he was already in front of his computer and I advised him to log onto Dictionary.com, which I had previously bookmarked.

Curious myself, I went to see the dictionary definition of the word and was floored. In fact, I was so flabbergasted and unsure that I was seeing straight, that I called my husband and even e-mailed my mother before I could believe my eyes. No doubt, the following “illustrative” sentence appeared beneath the definition of the word:

“Every time Israel decides to bomb the life out of Gaza, Hamas is their scapegoat.” (Dictionary.com-Scapegoat)

After a little online research and help from the website “Documenting Anti-Semitism” I discovered that this sentence was culled from a Daily Beast article. Regardless of the source or the original context, this was no consolation as the damage was already done and the intentions were entirely clear. In their total war against Israel, apparently even the dictionary has now become a legitimate battleground for Israel-haters who seek to warp our very language while spreading disparaging and false remarks about the Jewish state.

Of course, there is nothing new about reading acerbic remarks about Israel and its alleged inhumanity. Hardly a week goes by without some anti-Israel diatribe at the United Nations or the leveling of false accusations at the International Court of Justice in The Hague. Perhaps it is not surprising that Israelis are the sole party blamed for the Israeli-Palestinian conflict if you consider the historic scapegoating of Jews for all of the world’s problems. Indeed, you could say that ever since the Jews were falsely accused of the crime of deicide, pretty much everything and its opposite has been pinned on the Jews.

As such, it is particularly ironic that the author of this sentence chose the word scapegoat to describe Hamas. After all, these are the same people who blame the Jews (in Article 22 of the Hamas Covenant) for orchestrating both the French and Communist Revolutions, for supposedly using Jewish money to direct the Imperialist states to “colonize many countries in order to exploit the wealth of those countries” and for being behind both World War I and World War II.

Whereas the scapegoat of Jewish tradition was a type of collective therapy and an opportunity to start the year afresh, our critics now subvert the very meanings behind our own customs to vilify us. Not so much a matter of interpretation, this is a willful misinterpretation of facts and the history of the Jewish people. As we near Yom Kippur, our Day of Atonement, we recall the scapegoat of Temple times and our long, painful history of being history’s favorite scapegoat. As this libelous sentence sadly demonstrates, Israel – the collective Jew in the panoply of nations – is still being scapegoated for the actions of others.

About the Author
Ilana was born in London, England, and currently resides in Camarillo, California. She graduated from Manchester University with an LL.B in 1991. Her writings include the play “A Recipe for Hummus,” and her novels "The Diary of a Wrinkle" and "East End Dreams." "Age Schmage" is a little book intended to help women in their moments of doubt; "A Cookbook for the Woman Who Hates Cooking" is an honest, yet funny approach to cooking; "What if I Had a Different Name?" is a collaboration with her son Jack and it’s a fun exploration of some of the weird and fantastical names that Jack imagines as his own; "The Cloud That Covered My Head" is a whimsical story about a boy who preferred to stay in bed and dream rather than go to school, and "Rotten Tooth Ruth" brings to life T. Brush, Minty Paste, and Floss who must think of a way to befriend Ruth; "Bobby B. Sprout Meets a Bunch of Rotten Veggies" is an allegory for anyone who's felt like the "other," it's all about racism/antisemitism. "My Best Friend Shadow" teaches that life can be bigger, better and fun, and her latest publication now available on Amazon is "I'd Rather Eat Fries!"--a charming tale about a picky eater and parents who make one mistake after another as they try to convince their son to adopt a healthier diet. Other work includes "Diary of a Wrinkle" a blog where she muses on the topic of aging and beauty and @wrinklerevolution is her corresponding Instagram account. You can follow her on @soletseat for her daily culinary creations and for more of her creative writing inspiration you may scroll through @whoopdedocreations. "A Yemenite Bride" (a screenplay) tells the story of Ilana's great-grandmother Saida, and sheds light on the life of Jews in Yemen during the early 20th century, and her adapted screenplay (of her book) "East End Dreams" tells the story of Gertrude, a widowed, middle-aged, Jewish woman who leaves South Africa and returns to her birthplace of London where she battles with a type of existential crisis, as she tries to find her purpose in life as well as love in an unfamiliar, new world.
Related Topics
Related Posts
Ilana K. Levinsky
Comments