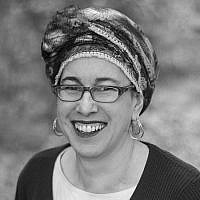 The Blogs
Hadassah Levy
Apply for a Blog
Please note that the posts on The Blogs are contributed by third parties. The opinions, facts and any media content in them are presented solely by the authors, and neither The Times of Israel nor its partners assume any responsibility for them. Please contact us in case of abuse. In case of abuse,
Report this post.

If you’re heading south anytime soon, take a tour of Sderot with the Sderot Media Center. It will totally change your perspective on the lives of the people living there.

On the one hand, the 20,000 residents of Sderot are living an unimaginable life of fear. Their schools have been rebuilt as enormous bomb shelters, every bus stop doubles as a shelter and even their playgrounds need safe areas for escape. Because the explosives coming from Gaza are so low-tech, by the time the army knows where they are headed, there are only 15 seconds to find shelter before the rocket lands.

Children in Sderot and the nearby kibbutzim have grown up sharing their bedrooms with the rest of the family many a night. They are taught to sing a special song while in the preschool bomb shelter, so that they drown out the sound of the explosion. Teens who have reached the age of the draft are discovering that the sound of gunshot scares them and their dreams of joining a combat unit must be abandoned.

Hearing all this, seeing all this, you expect to find Sderot a ghost town. Surely anyone with the means has moved far away by now? And new people can’t possibly be moving in! It turns out that beautiful apartment buildings and large villas are being constructed all around the city. Young people who grew up in Sderot and starting their own families are choosing to stay in this city they love. And religious families who want to strengthen the residents’ ties to Judaism are joining the community.

As with any small city in Israel, the people are friendly, and their strange circumstances have made them draw closer. 400 factories provide sufficient employment and the Sapir College offers higher education. Sudanese workers have flocked to the city to work in low-paying jobs and yeshiva students come to the hesder yeshiva for intense Torah study.

The children of Sderot are taught that they are protected: the government, their teachers and their parents have done everything possible to keep them safe. In fact, in all the years of rockets being fired at the city, only 18 people have been killed. Living in Sderot, while psychologically pretty scary, may not be more dangerous than many other areas of the country. I came away feeling that their choice of residence is no stranger than mine.

The people of Sderot deserve our admiration and our support. You and I can’t do anything about the security situation or the policies that have led to it and allow it to continue. But we can visit and see for ourselves what the city is all about. Take a tour and get the real story. And then go to a café, shop in a local store and leave some money in Sderot.

About the Author
Hadassah Levy is a partner at i-Point Media Group, which specializes in social media, SEO and content writing. She has been living in Israel for 20 years.
Comments