A year earlier we returned to Israel after a long stay in the US. From distant Texas the summer of 1994 seemed like a wonderful time to be back in Israel. No one could have guessed that all that would end on November 4th 1995.

I recently took part in “the Narratives Project,” an initiative organized by The Parents Circle-Families Forum (PCFF). It brings together 15 Palestinians and 15 Israelis for several meetings in order to get to know each other and to promote understanding and peace.

The first meeting was for an intensive weekend in Beit Jala. In one of the organized activities we were asked to write down dates with special meaning and to stick the notes on  a rug at the center of the room. Among other dates from my biography, I chose 1994, and noticed that one of the Palestinian members also wrote down that same year.

Then we discussed the significance of the dates. It transpired that while for me 1994 was a year of great hope and optimism, for my Palestinian counterpart it was an especially difficult year. He was imprisoned and besides, this was also the year of the massacre in the Cave of the Patriarchs.

Several Israelis, including me, wrote down November 4th, 1995 as well . Together we lamented Rabin’s assassination and its consequences. In contrast, none of the Palestinians chose that date, it seemed that for them it had no significance.

Until he told me I had no idea that for the man, who was sitting next to me, 1994 could mean something so different, and he had no idea how Rabin’s murder startled my world.

Perhaps such ignorance could be understandable between Israelis and Palestinians. However, earlier this week I had an opportunity to reflect on the devastating consequences of similar ignorance, within our own society.

The NPR program This American Life devoted a whole episode to the night of Rabin’s murder. In Israel we have been talking about that tragedy constantly in the last twenty years. The radio program “The Night In Question” with Nancy Updike, Dan Ephron and Ira Glass at the studio, consisted of several interviews with people who were directly and indirectly connected to the night of the murder.

Motti Naftali, the police investigator who questioned Yigal Amir that night, admitted that in preparation for the rally in KiKar Malchei israel, the police and all those responsible for security, never contemplated the possibility that a Jewish assassin would harm the prime minister.

In retrospect it seems absurd, especially in light of the incitement and the hatred that preceded the murder. But of course at that point in time Israel was still in its Age Of Innocence and our prime minister was alive.

At the end of the hour the right wing activist, Daniela Weiss, showed the reporters a plaque outside her home in Kdumin. Weiss was especially proud of a quotation which she engraved on it. It is taken from minutes that Rabin, the prime minister at that time, sent in1975 to the cabinet members: “Let them (the settlers enter camp Kadum, in three weeks they will be out of there.”

This dismissive remark reveals that even a leader like Rabin had a blind spot. He believed that the harsh conditions (no electricity, or running water) would defeat the settlers. As a secular Jew he had no knowledge of or respect for their strength which stems from ideology and zeal.

On the other hand, Daniela Weiss  is naive if she expects that the action of one man could change history forever, and  she is blind if she believes  that Jewish settlements could remain in the west bank surrounded by millions of frustrated and desperate Palestinians.

Perhaps it takes a detached outsider to put a  finger on what is wrong with a certain society, or as the Hebrew proverb goes: “An occasional visitor sees all faults”. The Night In Question gave me the opportunity to look at my society from the outside and it really scared me.

This essay by Dan Ephron is an excerpt from his book Killing A King: The Assassination Of Yitzhak Rabin And The Remaking Of Israel.

To add some figures which support my claim regarding Daniela Weiss’ blindness, I attach a chart which was published by Peace Now 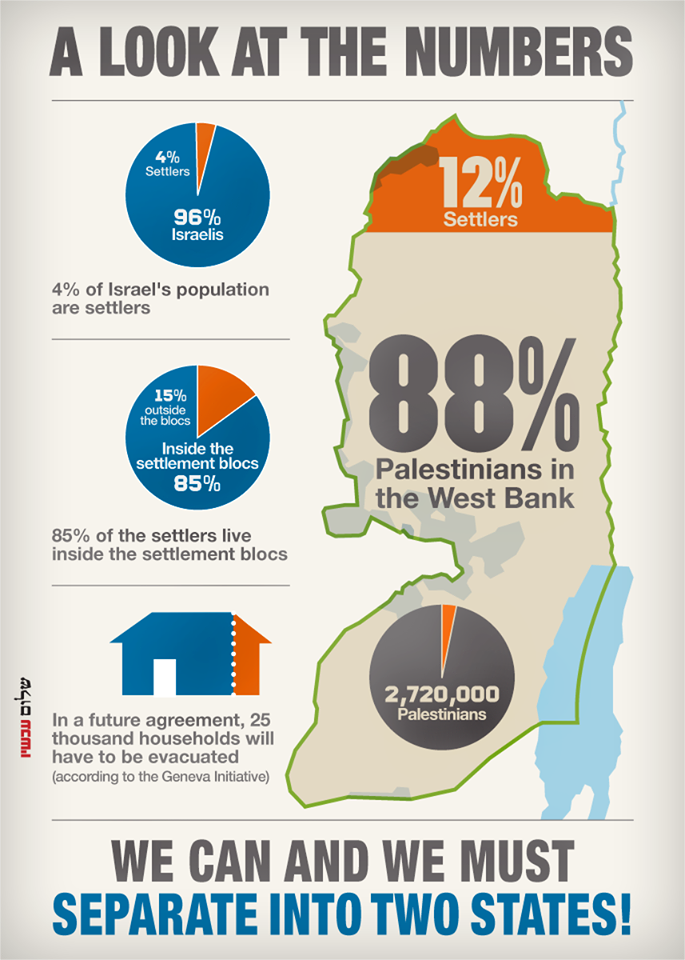