We say that all the time.

And, right now, I mean it – it’s really nice to see you!  I love seeing everyone in shul on Shabbat morning at our main moment of gathering each week to pray, to hear the Torah, to learn and to connect.

So, it’s really nice to see you!

But, do we really see each other?

Do we really look at each other’s faces?

Take a moment and turn to the person next to you or behind you or in front of you. Turn to them and look them in the face.  Truly, look into their face.

Some of you are not doing it.

C’mon, you can do better than that.

Just look at the person next to you – look at them in the eyes.  You don’t have to say anything to them. 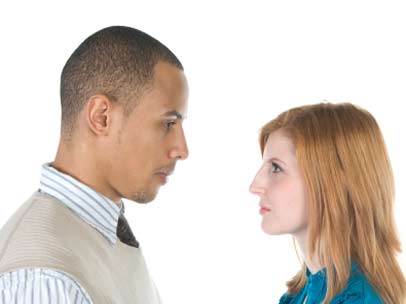 But it’s not easy.  It’s not easy to look at someone so intensely.  We usually just glance at each other.

We don’t really see each other.  It’s hard to truly see someone.  It’s uncomfortable.  We want to look away.  The intensity can be overwhelming.

This week, we read a parashah that is about seeing the face of the other.  As Nathaniel spoke about so well, this parashah is about two siblings who have not gotten along and they – Jacob and Esau – have not seen each other in 20 years.  That’s a long time.

Let’s think about their reunion.  When they last saw each other, Esau stated explicitly that he wanted to kill Jacob.  Jacob ran for his life and now, he is returning to his native land, what today is called Israel.

Jacob hears that his brother is waiting for him with 400 armed men.  This cannot be good.  As novelist Dara Horn explains in this week’s

G-dcast (and yes, I am quoting from a cartoon YouTube video on the parashah – it happens to be excellent!), “Jacob handles this the way he’s handled everything else in his life – by manipulating, dodging, and hedging his bets.  He divides his entourage into two camps so that if one of the groups is attacked…” the other group could survive.

He prays to God for help and sends gifts ahead to his brother.  He sends his wives and children to the other side of Yabok River and he is left alone.

There, he is attacked by a mysterious assailant who wrestles with him all night long.  This is a very physical encounter since Jacob comes away with his hip wrenched out of its socket.

Although he is weakened Jacob bests the assailant and will not let him go, demanding that he bless him.  Instead the man changes Jacob’s name to Yisrael, meaning “wrestles with God,” since, as the mysterious assailant says, “you have wrestled with God and men and succeeded – ki sarita im Elohim v’im anashim va-tukhal.”

Jacob asks the man what his name is.  And he replies, “Why do you ask my name?”  And he does not respond, he does not tell Jacob who he is.  He blesses Jacob there and leaves.

Who is this mysterious assailant?

The most common explanation is that he is an angel and that is the way this encounter is often portrayed.  The problem with that understanding is that just last week we read about Jacob dreaming about a ladder with angels ascending and descending upon it and the Torah had no issue calling them angels. 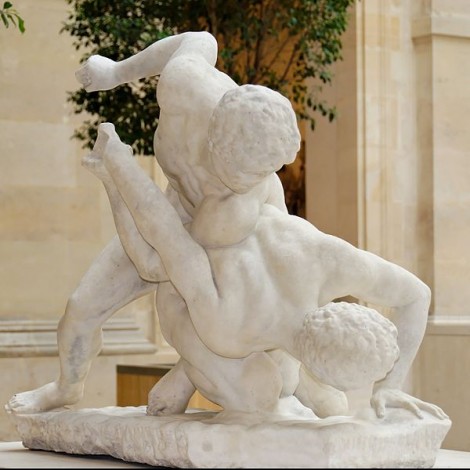 The Wrestlers (also known as The Two Wrestlers, The Uffizi Wrestlers or The Pancrastinae) is a Roman marble sculpture copied from a lost Greek original of the third century BCE. It is now in the Uffizi collection in Florence, Italy. This copy is by Philippe Magnier (French, 1647-1715) and located in the Louvre.

The other idea that resonates strongly with me is that it is actually Jacob’s conscience.  The problem with that explanation is that the Torah used the word “ish” – a man – so it would be hard to wrestle with your own conscience and actually wrench your hip.

Horn offers the idea that the attacker was Esau.  He leaves his entourage and wrestles with his brother.  He does not kill him, but they struggle – acting out all the pain and animosity that was pent up for decades.

The strange thing is that Jacob names the place of this encounter “Peniel,” explaining that “I have seen the face of God face-to-face and was saved.”

But he did not really see him, since he has to ask who he is!

Fast forward a few verses and the narrative becomes more clear.  Suddenly, Jacob looks up and sees Esau and his 400 man security detail.  Jacob approaches him, bowing seven times to the ground in a gesture of submission and apology.

All of sudden, everything changes, Esau runs from his mini-army toward Jacob, embracing him, falling on his neck, kissing him and they both cry tears of reconciliation.

Jacob introduces his family and asking Esau to accept his gifts, states, “No, I beg you, if now I have found grace in your sight, then receive my present from my hand, for therefore, I have seen your face, as though I had seen the face of God, and you were pleased with me.”

This is one of the key scenes in the entire Torah, an intense moment of two estranged brothers – separated by jealousy, deceit, geography and twenty years, suddenly pushing all that aside.

They are looking into each other’s eyes and as Jacob says so perfectly, it is like seeing the face of God.

There is something about seeing another person, truly seeing them, really looking into their eyes, that is so powerful.

How often do we do that?

How nice it is to stop and really look at someone’s face and truly connect with them.

A British scientist found that less than half the time people when people are talking to each other are they actually looking at each other, let alone making real and deep eye contact. 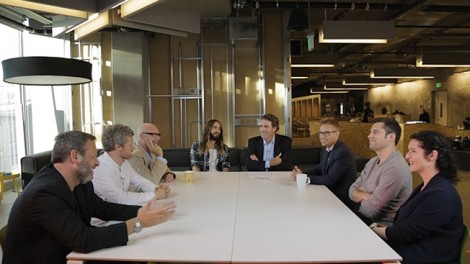 But, when we do it, we have a deeper connection with someone and that is a taste of what it is to see God, according to our tradition.

Emanuel Levinas (1906-1995) was known for his work related to Jewish philosophy, existentialism, ethics, and ontology.

Emanuel Levinas, the French Jewish philosopher claimed that God was most intensely experienced in the space in the middle on top of the cover of the Ark of the Covenant.

And why?  Because there were two cherubs looking at each other on that cover. 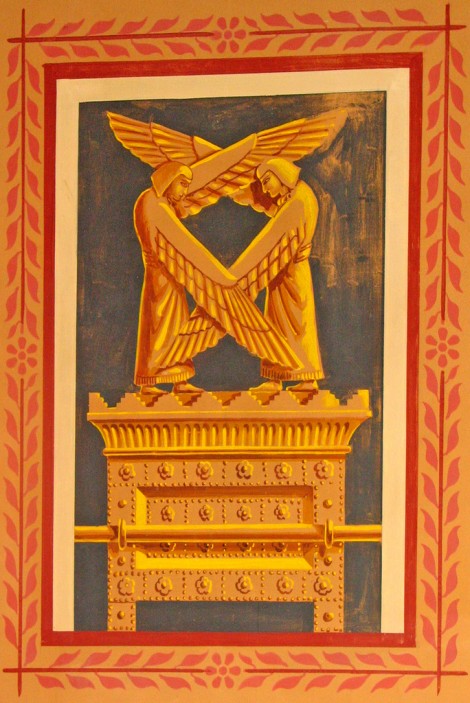 Mural of the Ark of the Covenant with cherubim

Their looking at each other is a reminder that God is found most intensely in that space between two people really making eye contact with each other.

Science claims that looking into someone’s eyes has an intensifying impact.  A loved one’s lingering look can trigger a rush of happiness, but too much eye contact with an acquaintance or a stranger can bring on sudden discomfort.

For most of us, we could use more eye contact and lingering eye contact with those with whom we are close.

In Jacob’s case, he was able to see his brother Esau and Esau saw his brother anew, forgiving him for his past misdeeds.

Their eyes coming together, their seeing of each other’s faces became a moment of seeing the face of God.

And in our world, where there is so much violence and pain, we could certainly use more looking at each other with kindness.  It’s hard to imagine people hurting each other if they stopped to look at each other.

Let us all commit to truly look at each other, looking into each other’s eyes and seeing the face of God.