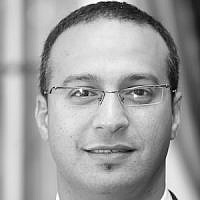 The Blogs
Yechiel Shabi
Apply for a Blog
Advertisement
Please note that the posts on The Blogs are contributed by third parties. The opinions, facts and any media content in them are presented solely by the authors, and neither The Times of Israel nor its partners assume any responsibility for them. Please contact us in case of abuse. In case of abuse,
Report this post.

Israel is a wonderful country dealing with many great challenges and also providing great solutions to many problems all over the world.
However, Israel is failing in explaining its’ right to live as a nation who seek peace in its historical land. A subject that would be considered trivial.

Thus, according to fundamental Islamic groups, the only way to deal with the Jewish people is to change the Israeli-Jewish status back to the “wandering Jew” status: a homeless believer, whose purpose is to live a life of sorrow and humiliation, wandering from place to place. “Al-Hakir” and “An-Nafi” – the useful but the despised.

Israel, a nation that is considered to be a start-up nation, inventing gimmicks for the benefit of humanity, is doomed to despise, according to the extreme Islamic gropes, because of the way they treated Jesus, Muhammad and other prophets of ancient Israel. A stubborn nation that is destined to be a symbol of negativity in human nature.

According to Judaism, as the final redemption is coming, the Jewish people will return to their historical land in order to build their new national home – the state of Israel. However, according to the extreme Islamic groups, the gathering of the Jewish people in Israel was meant to avoid a complete defeat and destruction during the “last war” ,that will take place in Syria and in Israel, between the believers (the Muslims) and the devilish people (the Jews).

Among the traditions in the Islam, there is one tradition (“Hadith”) that is refining to the end of times. According to this tradition “…Days will come and the Muslims will fight the Jews in the holy land. The Muslims will kill the Jews and some will hide behind wood and stone. Then, Allah will make the wood and stones call the Muslims and say: “a believer, a God worshiper, a Jew is hiding behind me, come and kill him”. such expressions were heard during the recent Al-Aqsa Terror Wave.

My doctorate’s thesis describes the essence of the struggle based on ruins in abandoned areas in the Israel’s Green Line area, the area that was marked during the cease fire agreements of 1949. The Islamic movements alongside the village’s displaced unions manage a very systematic and thorough follow up in order to return the ownership on the Waqf lands with volume of which is estimated at seven percent of the State of Israel of 1949! At the same time, these entities are mapping, marking and rehabilitating thousands of abundant religious sites such as mosques and cemeteries for the purpose of deliberately determine the presence of Arab communities in the place before the establishment of the state. The ultimate goal, which they do not deny, is to exercise the right of return to these places for the natives.

Today, about a quarter of the Arab’s population living in Israel are displaced, thus, Arabs who were forced to move from their homes after the war. They were not exiled from Israel to Lebanon, Syria or Jordan, and therefore are not considered refugees. They are considered to be Israeli citizens who see the ruins of their villages and want to go back home, only on those villages there are currently existing kibbutzim and Jewish villages and towns. The head of the Higher Follow-Up Committee of the Israeli Arabs, a former member of the Israeli government,

Mohammad Barakeh, is one of them. And he declares:” I am “Tzfafri”! My ancestors lived in Tziforia, today’s Tzipori, (Tzipori of Rabbi Yehuda the President), and I intend to go back. The Mosques and cemeteries are the proof of my rights in this place”.

The ruins of these communities are located mainly in the Galilee, in the Triangle area, in the northern Negev and the south of the Shfela area, places where the percentage of the Jewish population is low and in some places, identical to that of the Arab population. This difficult situation will cause the demographic Israeli’s settlement map to change radically. In the areas of 1949, Israel’s stand as a Jewish and democratic state will be unstable. Then the Israeli Arabs will demand, loud and clear, all that is now supported by only few members of the international community: national rights and a return to the division plan of 1947, and the making of Israel to a “state of all its citizens”. By doing that, Israel will lose its Jewish character and thereafter everything is possible.

Among other things, I was asked to submit an expert opinion on behalf of the City of Be’er Sheva, for a petition from the Supreme Court (case number 7311/02) Islamic movement, which sought to restore activity in an abandoned mosque in downtown Be’er Sheva. This mosque served as a museum for 50 years. A Mosque near where the Muslim population does not reside and it is not required for rituals. My opinion had helped the state and the municipality with their struggle to preserve the site as a museum.

I met with a different Muslim -Arab groups, who also want to end the bloodshed conflict, and to solve the endless war between the two nations/ religious/ cultures. Together, I believe, we can find a solution!
But first we must seek more good guys among Jewish and Arab-Muslim.

About the Author
Yechiel Shabi holds a Doctorate degree in the studies of land of Israel. He is an orientalist and also has an MBA in business and marketing. He is fascinated by the topic of Islam and the Israel-Palestinian conflict, and writes many articles on the topic.
Related Topics
Related Posts
Comments