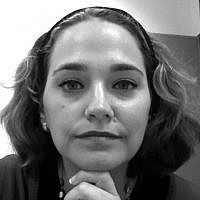 The Blogs
Eliana M. Aaron
Apply for a Blog
Advertisement
Please note that the posts on The Blogs are contributed by third parties. The opinions, facts and any media content in them are presented solely by the authors, and neither The Times of Israel nor its partners assume any responsibility for them. Please contact us in case of abuse. In case of abuse,
Report this post.

In recent days and weeks I have received numerous concerned calls, emails, texts, whatsapps, from friends and colleagues in the US. I am certain that most of us living in Israel have received similar communications. As I told each of these concerned folks, I am grateful for their kindness and concern with all of my heart. I was also heartened to see a recent poll that in these times of anti-Semitic rampages in Europe, Americans remain more pro-Israel than ever.

The reality is very different on the ground than it is on CNN. Most of the country is living in a relatively normal way. A few changes: Most people aren’t going to the beach (no bomb shelters, too exposed), everyone is listening to the news to keep up with the salvos of incoming rockets from Gaza, calling friends who live near the alarms to check up on them. Now that many of our husbands, sons, brothers, sisters, daughters have been called up to reserves – we are all hyper-vigilant, praying more, worried for their safety. In my small town 60 young men are now in the Gaza area. Thankfully, in the Center of the country, we thankfully have Iron Domes to save us from most of the rockets and fall out. We have a “comfortable” 1-1.5 minutes to seek a bomb shelter when there is a Red Alert. In reality, we needed the whole 1.5 minutes to wake up ourselves and several small children and make our way to our bomb shelter on the first floor.

What was truly eye-opening for me this week was hearing stories from my shell-shocked nursing students who live in small kibbutzim or towns near Gaza, who describe an entirely different reality. They have no Iron Domes. They have few bomb shelters. They have 15-20 seconds to find some sort of shelter. One student described how the kibbutz members risk their lives working in the fields – when the frequent Red Alerts sound, they just throw themselves to the ground. They have to work in the fields because Shmita (biblical Sabbatical Year) is coming soon, and no planting or preparing the land can be done for a year. On her kibbutz, the bomb shelters are not open, because no one can get to one on time. She described walking to synagogue with her father last Friday night, and a Red Alert sounded. Her father pushed her into brambles at the side of a building and covered her body with his. The rocket landed 200 meters from them. Her legs bear the scratches of her father’s quick thinking. This student could not study for her college exams, because she hasn’t slept for days.

People living in these areas, which include three major cities of Ashdod, Ashkelon, and Be’er Sheba, have to calculate the risk of taking a shower, of going food shopping, of going to work and leaving children behind, of making quick decisions about how many small children can be woken up and saved in 15 seconds. It is unimaginable, truly, for those of us who are further away. No one wants true peace more than Israelis. True peace – not a temporary reprieve so that our enemies can re-arm and dig more tunnels under schools.

I feel lucky and safe to be in a country where the protection of its citizens is of utmost importance. The Red Alert has never been wrong. The people trust the instructions from Homeland Security, and following them has saved countless lives. Our self-protection of course cannot be purely defensive – who can continue to live under these conditions? Would any other country tolerate it?

Meanwhile, Hamas-controlled Gaza is a self-destructive entity. Out of the 1497 launched Hamas rockets in the first 10 days of the current “situation”, 100 rockets shot from Gaza… have fallen in Gaza causing an untold number of casualties. Many of Hamas’ mortars and rockets have fallen on their electrical power center, located in Israel, causing power outages in 80% of Gaza. The Israeli electric company cannot repair the damage as it would put the workers in mortal danger from the continuing shelling. I am waiting for the world leaders asking for restraint to blame Israel for Gaza’s lack of power and resultant humanitarian crisis. After all, electricity is needed for hospitals, comfort, food storage, and sanitation. They destroyed it because Hamas is self-destructive with suicidal tendencies. Here is a comparative outline. 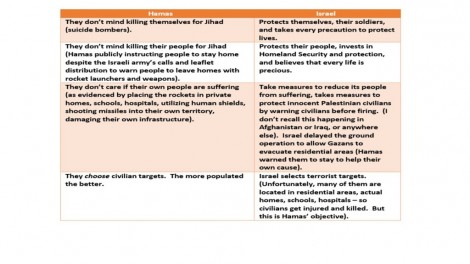 Comparative Analysis of Hamas vs. Israel in self preservation and self-destruction

Yesterday, the UNWRA condemned “those who placed” 20 rockets in a UN sponsored school. The UN knows exactly who placed the rockets there. Why tip toe around it?

Western-thinking intelligent people cannot fathom this self-destructive behavior. Israel has accepted two ceasefires in the last week. Hamas accepted nothing, continuing to fire on Israel relentlessly even during a UN humanitarian ceasefire, putting feeding their people secondary to killing Israelis. How can you have a peace treaty when the weaker party doesn’t accept any conditions? The one condition in this case was: Stop firing on Israel. I guess that was just too much for Hamas.

Do I feel sorry for the Palestinian civilians? Absolutely. Living with a-pseudo elected government who wants you to die, wants to create more severe humanitarian conditions, and wants to sacrifice your children for their cause – is horrific. Innocent people are being killed by both Israeli fire and Hamas mis-fires. Gaza is not occupied. Gazans were given the tools and means to become self-supporting in 2005 through the World Monetary Fund and other donors. They were given Israeli greenhouses to develop agriculture. The money was spent building rockets and tunnels, padding Hamas leaders’ pockets. The greenhouses were destroyed the day they were handed over. Building materials allowed into Gaza did not build better infrastructure, they built tunnels up to six stories deep to allow terrorists to infiltrate Israel and kill people, like 13 terrorists tried to do yesterday (right before the “cease fire”).

My advice to Palestinian civilians: If Hamas allows another election – don’t vote for Hamas.

Now that Hamas, a recognized terrorist organization has become “legitimate” and joined the Palestinian Authority (PA) with cheers from Europe and the US, a half billion dollars of US taxpayer money going into the PA is now funding Hamas terrorists that kill Jews and Palestinians without care. As a tax paying US citizen, I want my money back.

Furthermore, ALL American citizens should be outraged that in the current, continued economic crisis in the US, the US government is actively funding terrorism with your tax dollar. You choose: Support the people who value self-preservation or support the terrorists that support self-destruction. You can’t do both. There is no middle ground. There is not “restraint on both sides”. If someone is trying very hard to kill you, you don’t restrain – you stop them. 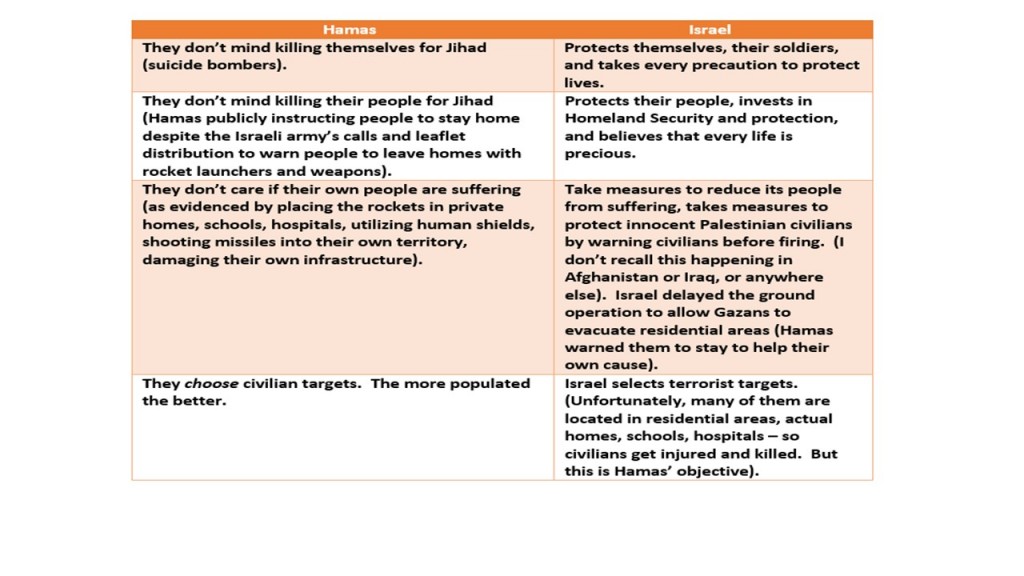 Comparative Analysis of Hamas vs. Israel in self preservation and self-destruction
As Golda Meir famously said in 1957: “Peace will come when the Arabs will love their children more than they hate us.”
About the Author
Eliana M. Aaron, DNP(c), MSN, APN-C, CRNP, RN is a (US) nurse practitioner, lecturer in nursing, Israeli nursing health policy expert and researcher, and a doctoral candidate at Yale University. She has lived in Israel since 2002.
Related Topics
Related Posts
Comments