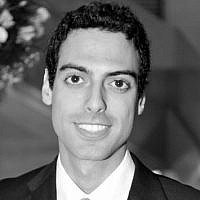 The Blogs
Dan Rob
Apply for a Blog
Advertisement
Please note that the posts on The Blogs are contributed by third parties. The opinions, facts and any media content in them are presented solely by the authors, and neither The Times of Israel nor its partners assume any responsibility for them. Please contact us in case of abuse. In case of abuse,
Report this post.

Harsh words, indeed. But it’s more jest than disparagement and only meant to provoke a bit of debate on a rather unanimous attitude in Israel. So don’t lynch me just yet!

The state of Israel is truly a start-up nation; not a week goes by in which I’m not confronted by starry-eyed students with the next Waze and an ever-increasing proliferation of the titles ‘entrepreneur/CEO/founder’ on the profile updates of LinkedIn contacts.

It’s not a coincidence either. There’s a special blend of stubbornness and ingenuity in Israel that catalyzes a societal obsession with entrepreneurship and innovation. Other countries are continuously striving to replicate Israel’s success in breeding an innovative culture, but to varying degrees of achievement. Johnathan Leow, an exchange student at the IDC Herzliya from Singapore, explains that culture has played a central role in stymieing the adoption of Israel’s innovative character in his home country. Traditional Asian culture puts a premium on humility, while parents expect their children to expedite ‘Return-On-Investment’ by joining the workforce immediately and working hard for a decent wage.

Basically, stop dreaming and get a job, kiddo!

Institution building has also been a key, though less acknowledged, component of Israel’s burgeoning innovation industry. In the early 90’s the Israeli government invested in creating incubator programs designed to tap into the pool of over 700,000 new immigrants from Russia, many of whom were scientists and engineers. What started as only six incubators in 1991 has grown to 26 incubators today, with an annual allocation of approximately $1 billion from Israel’s Office of the Chief Scientist (OCS) division of the Ministry of Industry and Labor. These institutional investments bore Israeli tech and pharmaceutical giants that generated billions of dollars in tax revenues and employed thousands of Israelis.

At this point, the picture seems pretty damn rosy. So why the gloomy, sensationalist title? Where’s the hook?

The hook comes in the form of a report submitted to the Israel Securities Authority by the Committee to Promote Investment in Public Companies Engaged in R&D (typing that almost gave my fingers arthritis). The study found that Israeli startups today raise 73% of their funding from foreign sources of venture capital investment, a proportion that has been continuously growing over the years. What this implies is that Israeli ventures are increasingly foreign-owned, drastically reducing their contributions to the Israeli economy. Furthermore, 95% of acquired Israeli startups are sold to foreign bodies, forgoing the option of going public in Israel. Economists are beginning to see a worrying trend of Israeli startups increasingly taking the exit route, almost always to foreign companies.

When I mention this to friends and students, they very often respond with ‘so what?’ After all, foreign companies are paying big bucks for these startups and it’s a great source of hasbara ammunition for Israel. This kind of analysis is painfully shallow and fails to take into account several aspects of an accelerating trend that has Israeli economists increasingly worried.

Every acquisition means that Israeli assets are turned over to foreign hands and that Tel Avivian techies are ceremoniously converted to Silicon Valley techies. Every exit means one less potential Teva or Checkpoint, foregoing billions of dollars in Israeli exports and thousands of Israeli’s employed. What the research from the ISA has helped remind Israeli economists is that no nation has ever become an international economic powerhouse through exits alone. Robust economies are built on the bedrock of a vibrantly competitive ecosystem of medium and large enterprises, contributing to production, employment and exports.

Indeed, since the turn of the century, the proportion of Israeli startups and small businesses that have evolved into medium or large enterprises has been steadily decreasing (Israel is 24th out of 30 in the OECD in terms of productivity). This is what has economists on edge and the ‘exit’ culture is swiftly emerging as the main culprit.

None of this is to say that foreign investment and exits are a bad thing!

A fluid channel of international capital to Israel and foreign acquisitions of Israeli startups help fertilize and renew Israeli innovation. Just think of how many companies like Microsoft focus their R&D efforts in Israel; that has a huge impact. But the narrative being promoted here is one of balance; the growth of our economy cannot subsist on foreign acquisitions of precious assets and even more precious talent.

We need to find a way to promote growth and to retain both assets and talent within Israel’s economy. I believe that the solution must derive from the two foundational stones upon which Israeli innovation is forged: culture and institution.

Institution building was integral in the development of Israel’s tech industry in the 90’s. The incubators, the tax incentives for venture capital, the upgrades in infrastructure all catalyzed innovation. But as economists like Niall Ferguson, Laurence A. Tisch Professor of Economics at Harvard, are increasingly stressing today, institution building is a continuous process that must be permeated from each generation to the next. A great case study can be found in Singapore: all throughout the 80’s, Israel’s and Singapore’s GDP’s remained fairly similar. Only after the 80’s did Singapore’s GDP continue rapid growth while Israel stagnated (mainly in productivity). In order to investigate the causes of this disparity, Google Israel hired Deloitte to study the case. What Deloitte found was that Singapore was far more successful than Israel in maintaining and expanding its institutions of innovation. More specifically, Singapore was far more aggressive in overhauling infrastructure to support new internet technologies and making them more readily accessible to the public.

Zionism is a cultural pillar of Israel society. Today, Zionism is the national movement for the betterment of the Jewish nation. Thousands uproot themselves from around the world every year in honor of this movement out of love for Israel and a two-thousand year old yearning to be a part of it. Just as culture and society have helped incubate adoration for entrepreneurship in Israel like nowhere else in the world, we as a society should strive to promote a Zionist narrative to private enterprise that honors growth in the Jewish state. The same ideology that magnetizes Jews to the Jewish state should be employed to retain not only their hearts and bodies, but also their business. ISA chairman Shmuel Hauser has himself urged that Zionist values be utilized to encourage businesses to stay in Israel.

At the end of the day, this needs to be implemented with positive reinforcement, not demonization or guilt. It’s easy to judge from an armchair, but if Google offered you over $1 billion for almost anything, can you say with resolute confidence that you would decline?

Israel is an embryo and a startup nation. The potential that this tribe of lunatics harnesses is breathtaking. But in order to realize this economic potential, in order to become the economic powerhouse that we’re meant to be, we’ll need to transition (albeit gingerly) from a startup nation to a ‘start-it-and-let-it-grow’ nation.

About the Author
Dan Rob is a Bostonian falafel-aficionado and COO of Binfire.com, a start-up striving to be the ultimate virtual office. His love of Israel, falafel, entrepreneurship and the growth of the Israeli economy brought him and his team here. Dan also serves as a TA for economics courses at IDC Herzliya.
Related Topics
Related Posts
Comments