I have a confession to make. I am a regular reviewer of modern Israeli literature with a specialization in reading recently translated Hebrew books. Yet, my reviews have failed to cover the writing of one of the genre’s leading voices. Luckily, I had an opportunity to receive a copy of The Seven Good Years (Granta Books, July 2015) and get a proper introduction to Etgar Keret.

I recently read Tel Aviv Noir, a short story tour of the seedier neighborhoods of Tel Aviv. That collection was co-edited by Keret and novelist Assaf Gavron. One of my favorite stories was Keret’s contribution, “Allergies”, which told of a couple who adopt a dog and end up doing increasingly strange things to take care of the pet.

The story seemed so personal that I assumed at the time it may have come from the author’s personal experiences. Or maybe not. In any case, the essays collected in The Seven Good Years represent a memoir of Keret’s last seven years as he travels around the world speaking about his books; as he deals with losing a father and raising a son; and as he surprises us over and over again with his sly wit. 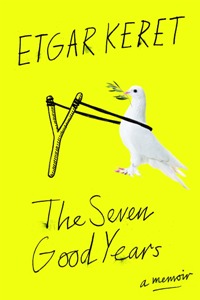 The essays included in this quickly-read collection are succinct anecdotes that cannot fail to entertain. If I have any advice about how to read the book it would be not to read it all at once. Each separate story should be savored for many moments; each provides a life-affirming look at family life, Israelisms, and what it means to be an author visiting book fair after book fair in far off lands.

The book is divided into seven sections by year, each including a few interconnected, but totally independent essays. It is difficult to pick favorites, as they are all extremely enjoyable; all leave a smile on your face and a desire for more.

I will mention two of them but only in brief, as the essays themselves are only a few pages long. In “Call and Response” the author battles a persistent telemarketer who will follow you to the grave to sell you an upgrade for your television satellite package. In “Pastrami”, the author must find a suitable way to explain an air raid siren to his seven-year-old son during the recent war in Gaza. As the boy nervously gets out of their car, he lies between his parents on the ground making a virtual ‘Pastrami Sandwich’, which becomes a game that can be played even when there are no sirens.

Now that I know what Etgar Keret has been doing during the past seven years, I have no further excuses. I must end my Keret deficiency by reading his five bestselling story collections as soon as possible, and certainly before he publishes another seven years of memoirs.

The essays in The Seven Good Years were translated from the Hebrew by Sondra Silverston; Miriam Shlesinger; Jessica Cohen; and Anthony Berris.

Etgar Keret was born in Tel Aviv in 1967. His short story collections have been translated into 35 languages and he has been published in the New York Times, the Guardian, the New Yorker, Le Monde and other periodicals. Keret has written a number of screenplays; “Jellyfish”, his first film as director alongside his wife Shira Geffen, won the Caméra d’Or prize for best first feature at Cannes in 2007.