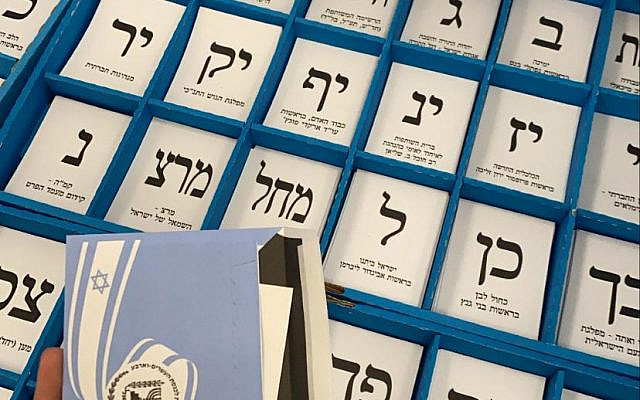 Like many Israelis, I just went to the polls for the fourth time in two years. Except that this time, I went twice. First, as a voter. And then, again, as an election observer. I’d been inundated with messages about the dearth of observers. Apparently, their presence is often enough to significantly reduce fraud attempts. I knew I’d feel wracked by guilt in the event of significant post-election accusations of fraud and I’d not responded to the repeated call. So, at the last minute, even as I fretted about my to-do list, I signed up to be a volunteer observer, and found myself arriving for the evening shift of election day, at a polling station in a school in a distant Jerusalem neighborhood.

I was to start at 6:30 PM and stay until whenever the counting was finished and verified. When I arrived at the elementary school classroom which served as our polling station, I found seven others, a mix of official staff and observers, all filling various roles to implement and ensure a legitimate process and final tally. They had been there since 6 AM, without any real breaks.

I was directed to a seat between two others and introduced myself. To my left sits a young man with a crisp white shirt, black kippah and tzitzit. He is also here as an observer. Observers must be under the auspices of a political party: he’s with an ultra-orthodox political party; I’m with a liberal secular party. Am I imagining it, or did two of the other people staffing the station give me a hard look when they heard my party affiliation? But my fellow observer greets me warmly. I ask him to help clarify a few things about how the whole thing works. “It’s my first time,” I explain, a bit embarrassed. “Oh, mine too,” he reassures me, and we both laugh.

The person to my right is under the auspices of the Central Elections Committee, here to ensure that everything goes by the book. We also chat a bit. On a normal workday, he’s training to be a social worker, placed at a hospital. When he hears that I’d worked with Jews and Arabs in joint schools he is amazed, and then looks suddenly wistful, even pained. “I thought I would find that kind of cooperation and acceptance at the hospital. But some people aren’t willing to be with others from certain ethnic groups…”

I settle in and do what I’m supposed to do: observe.

One at a time, voters of all ages, heights, types and backgrounds appear. There’s a woman in a black tracksuit with gold images, and a voice made gravelly from smoking. Another woman comes in complaining, but good-naturedly, why exactly did they have to do this right in the midst of Pesach preparations?! An old blind couple shuffles in slowly, both accompanied by a youngster who will have to help them vote, so special procedures have to be carefully applied. Then an old man comes in with the help of a walker and a grandson. It turns out his ID is expired, and as he becomes increasingly agitated, everyone jumps in to help work out possible solutions. In the end he waits on a chair we set up in the hallway, while the grandson runs home to retrieve a valid passport. The old man votes and leaves smiling.

With each voter, the staff goes carefully through the required steps: verifying their identification and whether this is their assigned polling station; instructing them as needed; ensuring that they have the time, space and privacy to enter one of the two booths, make their final decision (so many people seem to be debating between several parties until the last moment), and cast their vote.

The woman in charge sends off many of the departing voters with a cheery, “see you in four years!” Each time this provokes varying laughter, snorts, or a rueful headshake. “You’ve been saying that to people all day, and everyone reacts that way!” exclaims one of the other staff members. “Yes, well,” she says, “we at least have to aspire to it working this time around.”

Maybe fourth time’s a charm? Exercising our right to vote four times in the space of two years has started to make voting feel more like a trip to the ice cream store, taste-testing a slightly different party flavor each time. Or perhaps it’s like clothes shopping, trying the variations on for size – perhaps this one will fit just right.

One old man comes shuffling in, almost swimming in his bulky black overcoat and baggy grey pants. “Ah, your whole family has been here to vote already!” she declares as she checks his name on their list. He nods approvingly and shuffles across the room to one of the voting booths. When he emerges, he shuffles over to the blue ballot box at the center of the room, and then pauses, his hand hovering above the slit in the box where you are supposed to deposit your envelope with your vote. Baruch ata Adonai…. he suddenly intones, and proceeds to bless the State of Israel and its government. Then, baruch ata Adonai…. and he recites the shehecheyanu. And then, thrusting his hand into the depths of his coat, he pulls out a little bottle of kiddush wine, holding it up for all to see. He cracks it open, blesses it appropriately, takes a swig, and then, with a grand flourish, pops his envelope into the box. Amen!

Lots of people bring children with them. Some are little ones who clearly can’t be left alone; others are old enough to make it a civics lesson. I thought I’d read somewhere in the observer training materials that children are not to accompany the parents into the booths. This surprised me as I’ve certainly brought my kids along when I vote, without anyone ever saying it’s not allowed. No one says so now either. Actually, everyone seems to appreciate it, smiling approvingly in that way adults often do towards children. This is, after all, a family-oriented country, and that, it’s fair to say, holds true across all the different communities.

Throughout the long evening together, my fellow observer and I keep consulting and kibbitzing, in turns amused or troubled by the miniature portraits of human life we are glimpsing. “You know, it’s odd,” he says after a while. “Everyone seems to choose the voting booth on the right side of the room.” Now that he mentions it, he’s right. “Maybe,” I posit, “it’s because most people are right-handed, so they tend to go to the right?” Plausible, we agree. “I mean, it surely is no reflection whatsoever of what their political opinions might be,” I joke. We both start laughing, and the other staff cracked smiles too.

And indeed, at the end of the evening, when we are done with counting and re-counting (first of the voters, then of the envelopes, then of the votes themselves), carefully and very much by the book, the results from our polling station cover the gamut of the right-wing party options, with 89% going to Likud, Shas and other parties further to the right. A sprinkling of votes went towards the center and left, mostly for Yesh Atid, Labor, and Kahol Lavan. No vote was cast for an Arab party, which is not too surprising as it’s pretty much a Jewish neighborhood.

By the time we wrap everything up, it’s after 1 AM. The others have been there for close to 20 hours, almost without break, and, of course, always wearing masks for corona. They are utterly exhausted. A few people don’t have cars, so those of us who do sort out who will give a ride to whom. I end up taking the election committee monitor, who lives along my route home. None of us knew each other before this evening; we are unlikely to ever see each other again. But that’s just what you do after a long day of working together, after 1 AM, when most buses probably aren’t running, the wind is wild and a cold rain has started up.

I’d just spent seven hours I spent with this little group. Our political opinions most certainly cover the full spectrum. But whatever our personal politics, we had, together, made sure that every person who came into the room had a chance to cast their vote. It was proper, procedural, bureaucratic, and, to be honest, pretty boring to fulfill the required tasks of checking, verifying, counting. But it was also individualized and humanizing. Each voter had a name. Each was given the time and space they needed. Each had a chance to make their voice and vote count, as citizens of the same state, facing a shared fate, even if we may each feel and understand that fate in different ways. On this most political, politicized and polarized of days, we had come together, however briefly, under one civic umbrella, focused on fulfilling a common goal. Everything had been professional, but also personal, neighborly, a touch familial.

If the person is often political, the political, ultimately, starts and ends with people. We need a little more deep human connection to help us overcome the growing political divides. And an expanded civic sensibility, regardless of – and inclusive across – ethnicity, religion and religiosity. It is their corrosion that has helped plummet us into this endless spiral of elections. And only their revivification – or, perhaps more accurately, their co-creation through our determined joint efforts – which can help stabilize us.

Whatever the upcoming days of counting and coalition-building will bring, we have a lot of work ahead to push for more civically-oriented proper procedures, and less polarizing populism. If our leaders can’t bring it to us, then we’ll have to do a better job of bringing it to them.