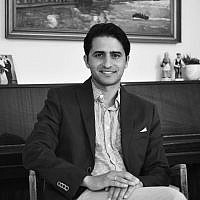 The Blogs
Nir Levitan
Apply for a Blog
Please note that the posts on The Blogs are contributed by third parties. The opinions, facts and any media content in them are presented solely by the authors, and neither The Times of Israel nor its partners assume any responsibility for them. Please contact us in case of abuse. In case of abuse,
Report this post.

In general, Israeli Statecraft recognized opportunities for the security establishment. To some extent in the years when Israel increased the window of opportunity with rounds of talks with neighboring countries, the role of intelligence personnel became essential.

The role of Israeli security services in establishing ties with hostile countries has borne fruit at various stages throughout Israeli history, largely due to long but consistent efforts to strengthen relations behind the scenes.

The late Danish Israeli Herbert Pundik, who was active on behalf of Israeli intelligence, is one example of many whose work behind the scenes is not widely known. During the 1990’s, as the peace process between Israel and the Palestinian Authority was underway, Pundik was one of the first to try to create the Oslo Secret Channel. He offered his son Ron – also a former member of the intelligence community and a representative in the secret negotiations – to open secret contacts in Copenhagen, but after the Danes refused to support this back channel, Ron Pundik shifted the focus to Oslo.

After the signing of the Declaration of Principles in September 1993, Pundik initiated a political channel known as the “Copenhagen Channel”. This channel was also called the “Louisiana Process” after the famous museum in Denmark where the first discussions between the representatives of Israel, Egypt, Jordan and the Palestinians began, culminated in the “Copenhagen Declaration”. The declaration dealt largely with the regional process and the normalization of ties between Israel and the Arab states.

The unofficial channel that developed between the parties enabled discussions aimed at promoting normalization. The Louisiana Process highlighted the importance of normalization, without reference to time frames but with the intention of persuading Syria and Lebanon to eventually join, as well. Pundik freely visited Syria several times.

Pundik was one of a number of personalities who played a role in normalization after the signing of the Oslo Accords. One of Pundik’s intriguing partners in the process was David Kimche, former director general of the Israeli Foreign Ministry and deputy in the Israeli intelligence service, who assisted Pundik. Kimche attended the Madrid Conference in 1991 and informed his counterparts in the Arab world in favor of a regional process. Kimche was closely acquainted with Arab leadership and claimed that it was in Egypt’s interest to remain the leader of the Arab world and influence the peace process.

Leading Egyptian intellectual, Lutfi-Al-Khuli and former Jordanian Air Force commander Ahsan Shudrom, were also involved in this process. Shudrom served as an advisor to King Hussein and had been active in Arab-Israeli dialogue. He is also the brother of Tahseen Shudrom, the former head of military intelligence who served in Hussein’s security services, as well. Tahseen Shudrom was also one of the personas who conducted talks between Israel and Jordan in Washington.

Al-Khuli was part of the negotiating delegation at the Madrid Conference. He was known as a sharp critic of the peace process with Israel and claimed after Sadat’s visit to Jerusalem that he would rather live in exile than live in a country whose president visits the ‘enemy’. However, years after the signing of the peace agreement, Al-Khuli decided to contribute to the normalization processes with Israel. He concluded that there is no military solution other than dialogue with Israel and was one of the great influential figures in Egyptian society.

As part of the informal process Kimche tried to enlist the support of Bahraini Foreign Minister Sheikh Muhammad al-Khalifa. It is not surprising that a former top Israeli official could contact a Bahraini Foreign Minister directly thanks to the broad network of an intelligence fellow. Since that time a significant change in the equation has taken place with the renouncing of negotiations with Palestinians as a condition for a normalization agreement.

Many partners in the normalization process are individuals who do not gain media exposure and also avoid it, but their long-standing contribution to establishing vital contacts for building political bridges is a historic milestone which inevitably leads the region to a process of peace and stability. For this those who’ve acted behind the scenes should also be recognized.

About the Author
Nir Levitan is a PhD from Bar-Ilan University's Graduate Program in Conflict Resolution, Management and Negotiation. His dissertation focuses on the Scandinavians' mediation efforts between Israel and the Palestinians during the period 1980-2003. He teaches at the University's Special Studies Program for Security Forces.
Related Topics
Related Posts
Comments