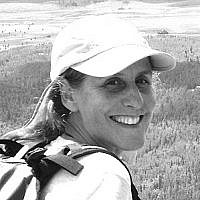 The Blogs
Sharon Haviv
Apply for a Blog
Advertisement
Please note that the posts on The Blogs are contributed by third parties. The opinions, facts and any media content in them are presented solely by the authors, and neither The Times of Israel nor its partners assume any responsibility for them. Please contact us in case of abuse. In case of abuse,
Report this post. 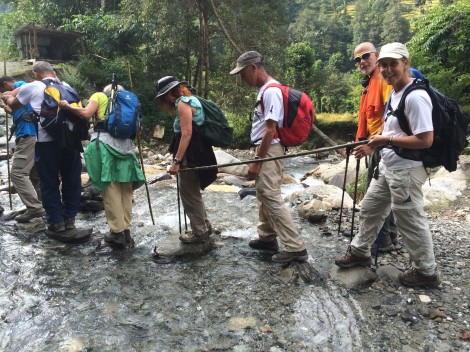 As a new immigrant from Australia I am constantly amazed by the inspirational people I meet here in Israel and even more amazed by the incredible initiatives these people are taking. One such story that I personally had the privilege of being involved with, this past October, is a trek in the Himalayas of Nepal with a group of blind Israelis.

These amazing individuals regularly challenge their physical disability with hiking the Israel trail, competing in marathons, triathlons, cycling tandem and traveling to out of the way places. This time their challenge was to trek to Annapurna base camp in Nepal.

The organizer of this trip, Shmuel L, a past Israeli commando, had been walking the Israel trail and cycling tandem with blind individuals in established clubs, when last year, while trekking with his wife in Nepal, decided that he would like to initiate a trip to the Himalayas.

I met Shmuel at Wingate Institute last year where we both studied “Outdoor Adventure therapy” and it was in the second week of the course, before jumping off a 12 meter pylon, that he expressed this dream as the goal that he was jumping towards.

At the time I admired his goal but had no intention of joining him, however, as his dream became a tangible reality I began to get excited about the possibility of joining such a trip. 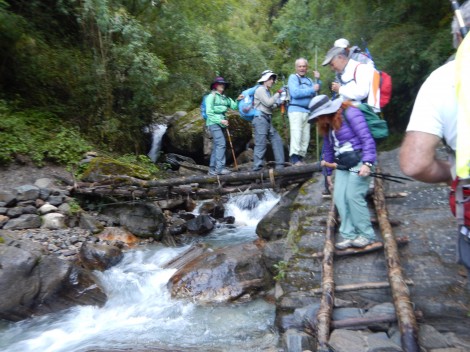 The whole world is a very narrow bridge!

I had trekked in Nepal 25 years ago, so the idea of sharing my sight with another person to enable them to experience the Himalayas really appealed to me and resonated with the wise words written in Pirkei Avot: “If i am not for myself then who will be for me, but if i am only for myself, who am i?”

Once I made my decision to join the group I participated in a walk in Jerusalem to learn more about what it means to walk with a blind person and had the opportunity of walking with one of the men already signed up for Nepal, Dror Z.

In this meeting I learnt there are a variety of ways to lead a blind person and each person has their preferred way. Dror, instructed me to hold his hand or preferably he held my upper arm, other couples walked with a band connecting their wrists and some couples walked one in front of the other with the blind person holding on to the back of his partners back pack.

In Nepal we also used a bamboo rod which was especially helpful on narrow paths and hilly terrain. The front person steered, much like on a motor boat, the back person provided support and balance giving confidence to the blind partner in the middle. Walking in threes actually proved to be a lot of fun due to the conversations and the cooperative nature of this aid.

During our Jerusalem walk, I also learned about the necessity of using accurate language when describing the path and how important language is as compensation for sight. This skill proved to be the most important and the most difficult during our trek especially since Hebrew is not my first language and accuracy could be the difference between safety and calamity.

Insights such as these and many more would inform me throughout the two and half weeks that we spent together in the Himalayas.

In the following months the whole group met a couple of times to discuss expectations and to get to know each other. In these meetings I was impressed to hear about the active, full lives the blind participants were leading but nothing I learned about them then prepared me for what I would witness on our actual trek.

Seeing my blind companions day after day negotiating the difficult hiking trails, trusting us to lead them safely and dealing with all the mundane tasks in unfamiliar, challenging conditions was truly remarkable.

Every day there was a new guest house with a different bathroom, a different bedroom and the need to unpack and repack again. Whenever i felt tired or was having difficulty in any way I just needed to shift my focus to my blind companions and I was straight away humbled by their resilience and determination. One outstanding example of this is Dror Z. injured his foot on the second day of the trek and even though he had severe bruising and pain he remained strong and positive. Upon his return to Israel he found out that he had actually broken his foot and needed to wear a cast and rest for a month.

During the day physical and mental endurance was apparent and in the evening, as each person took a turn to share his personal story, psychological and spiritual determination also became apparent. Each of the blind participants shared how they came to lose their sight.and how their blindness affected and continues to affect them in their work and personal life.

One of the men described how he could no longer work as a farmer once he lost his sight. As a result he felt helpless and depressed but after being introduced to Etgarim, an organization that coordinates sporting activities and physical challenges in nature for differently abled people, he was able to rebuild his confidence and self-esteem and find new hope and direction. Last year he competed in half “Iron Man”, a very difficult and competitive triathlon and is currently a highly sought after massage therapist. On the trek we all had the fortune of receiving his wonderful massages.

Another man in the group spoke about how Etgarim, helped him rebuild his life after his young son was murdered. He too felt helpless and depressed and through volunteering in Etgarim he was able to piece his life back together again and now has run tens of marathons and countless half marathons as a seeing partner.

Another extremely moving story was told by a very successful, career driven member of the group, who lost his teenage daughter in a car accident. He admitted that he would not have considered joining a trip such as this before his loss but now he knows that healing comes from giving.

On Yom Kippur eve we heard Ori’s story, a pilot in the 1973 war who was shot down and held captive in Syria for nine months, four of which were in solitary confinement. His message was that no torture was greater than the torture of being alone.

Our trek was not about reaching Annapurna base camp even though that is what we set out to do. Our trip was about seeing each other and helping each other, blind or sighted to reach beyond our normal constraints whether they be physical, emotional or psychological and reclaim our full selves.

During our trek I constantly experienced an invitation to broaden and enrich my experience by thinking beyond myself and my own needs. For example when we sat down to a meal it was helpful to inform our blind companions where there was an available chair, to mention who was sitting in the neighboring chairs, to identify what food was being served, to offer napkins or condiments and relate our surroundings. This in turn created a very special atmosphere of generosity in the group that extended to each member in the group. Sometimes I would find myself offering or receiving assistance not because it was required but for the pure pleasure of it.

The most poignant lesson I learnt along the trail was just how much of my life is sight dependent. How I understand my surroundings, how I socialize, how I make decisions and how I communicate. The number of times I pointed to something and said ”over there or over here” to a blind friend, only to realize that that had no meaning, was embarrassing.

One of the blind participants, Dror C., encouraged me to take a turn to be led. I resisted this challenge for a long time. I didn’t want to miss out on any of the beautiful scenery and was not keen to increase the difficulty of the trail. Nevertheless, towards the end, I decided to try it, and decided to push the boundaries even further by having Reuven, a blind friend, who I had been leading, lead me.

I chose to do this experiment on a large incline with relatively even stairs with short paths in between, under the supervision of a third friend, Avshalom. Even though I was without my sight for only half an hour I was shocked by how tiring it was. It involved so much concentration and trust. Not knowing what was coming next and having to rely on the information, spoken or sensory that was being communicated to me was extremely taxing. I also experienced a profound sadness in having this precious sense taken away. No light, no color, no pictures. It was devastating and even more so to think that my friends don’t have the choice to take off the blind fold. 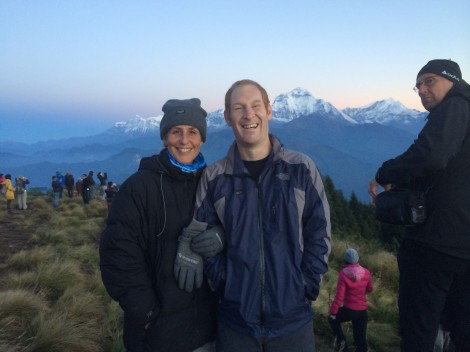 How do i describe this too you?

So, without sight you may ask what is the point of going all the way to the Himalayas? Well you can hear the massive rivers and waterfalls, you can touch and smell the flora and fauna. You can smell and touch and taste the local foods, you can speak to the local people and I was told at certain times of the day in specific light conditions, even the mountains are somewhat visible but in addition to all of these independent experiences, we as a group “shared our vision”. We shared our vision of cooperation and our sight.

For me, I saw the massive mountain ranges, the fast running rivers, the majestic waterfalls, the fluorescent green rice terraces, the magical rain forests, the charming villages and sweet villagers all with brand new eyes. This time I wasn’t experiencing them just for me, I was experiencing them for the benefit of my companions as well, while being privy to additional narratives by other seeing participants in our group.

When people met us along the trail and saw the nature of our group, walking together in threes or in partners and realized what we were doing they were shocked, inspired and delighted. We proved it was possible, and that our life is only limited to the boundaries we create!

So in conclusion, the “Why” can be summed up with we all had the opportunity to push beyond our normal boundaries and reach for a reality whereby together anything is possible, one step at a time!

About the Author
Sha’ron Haviv, outdoor adventure facilitator, shiatsu practitioner, community builder, event planner, teacher,traveler, writer, counselor adventurer, mother, dreamer and healer. I am very interested in personal growth and am dedicated to working cooperatively to make a difference in the world while having fun.
Comments