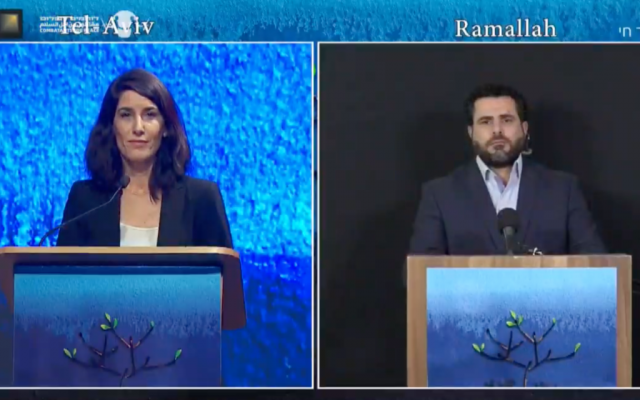 Only peace will bring security….Both sides need to make compromises for peace….We mothers on both sides know about bereavement….Enough is enough…Let us live in peace….My hope is that it can be better here for all of us…Reconciliation is better than revenge….Life is better than death…This conflict is man-made and humans can end it…Let us live in love and peace….

These were not the words on the front pages of our newspapers in Israel this morning, Yom Hazikaron, Israel Memorial Day.  Rather, they are a sample of some of the inspirational statements made last night by Israeli Jews and Palestinian Arabs who have lost loved ones during our conflict over many years, at the 15th annual Israeli-Palestinian Memorial Ceremony entitled “Sharing Sorrow, Bringing Hope.”

In comparison to these ceremonies in previous years, there were a number of things which were different this year at this event, which is the “alternative” Memorial Day ceremony for a growing number of Israeli Jews and Palestinian Arabs.

First of all , this year’s event, which was produced and live-streamed by two amazing Israeli-Palestinian peace organizations—Combatants for Peace and the Bereaved Families Parents Circle—was cosponsored  this year by many Jewish organizations in the diaspora including the Union for Reform Judaism, the New Israel Fund, J Street, Truah, Americans for Peace Now, The Alliance for Middle East Peace, and even some Christian ones, such as Churches for Middle East Peace and Telos, as well as some prominent Jewish-Muslim groups, such as the Sisterhood of Salaam Shalom and the Jewish-Islamic Dialogue Society of Washington.  This was an impressive achievement by the organizers.

Secondly, this year’s ceremony was held without a live audience, due to the strict rules against large gatherings in Israel in the time of the coronavirus epidemic. Whereas last year, I attended the outdoor ceremony in the Yarkon Park in Tel Aviv, with a record of 9,000 people, this year the ceremony was viewed by 170,000 people in Israel, Palestine and around the world. Some media reports said that the number was 200,000! Despite the “social distance” –or more correctly the physical distance—there was a great feeling of community among all the people who viewed this ceremony and participated in it with their hearts and minds. It was the largest demonstration of the peace community for Israeli-Palestinian Peace in a long time!

Thirdly, there were no right-wing crazies to greet us at the entrance to the park with their curses and fascist slogans, not to mention their attempts to spit on us or even to try to beat up people who seek peace. This was a welcome relief from the live events of past years and enabled us to concentrate instead on the meaningful messages of the ceremony.

The keynote speaker this year was Sami Shalom Shitrit, a Jewish Israeli poet, who lives in the city of Sderot, near the border with the Gaza Strip. He fought in the Lebanon War in 1982 and saw many soldiers who suffered a great deal. He too suffered, especially from the futility of that long war and from post-trauma. In his poignant reflection, he pointed to the irony of the fact that there has been no violence on the Gaza border for the past 6 weeks, since the outbreak of the corona virus in our region:

The virus has brought us back to who we are. We must live together in this land. But we will need courage to envision another future.

Finally, the ceremony ended with the singing of Hava Alberstein’s Chad Gadya – written in 1989 in the midst of the ongoing war of attrition in Lebanon which raged for 18 years (1982-2000). The Rana Choir of Palestinian Arab and Israeli Jewish women sang it, as they do every year, in Hebrew and Arabic. 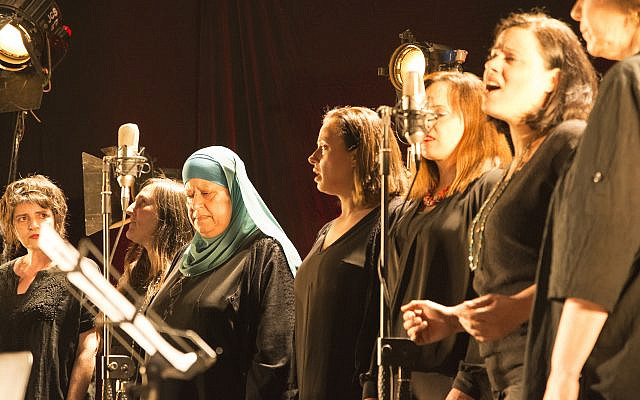 This beautiful song, with its haunting melody, has become the anthem or the closing hymn of this memorial ceremony, with its chillingly challenging final paragraphs:

The chased and the chaser
The beaten and the beater
When will all this madness end?
I used to be a kid and a peaceful sheep
Today I am a tiger and a ravenous wolf.
I used to be a dove and I used to be a deer,
Today I don’t know who I am anymore.

And we start all over again

The madness will end when more and more people speak up with courage and conviction for a vision of peace for both Israelis and Palestinians, as the people who produced and participated in last night’s inspirational ceremony did. They shared their sorrow and gave us hope for a better future, even in the coronavirus era, a time of much anxiety and despair.

Would that this would be the re-emergence of a mass movement for Israeli-Palestinian peace, which would bring an end to this bloody conflict which has lasted too long and caused too much tragedy on both sides. Sparked by this hopeful virtual memorial ceremony—which also looks towards the future—perhaps there can once again be a groundswell for peaceful coexistence, for the mutual benefit of both peoples, the Jewish People and the Palestinian People.