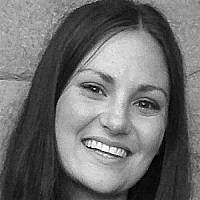 The Blogs
Ruchie Zema
Apply for a Blog
Please note that the posts on The Blogs are contributed by third parties. The opinions, facts and any media content in them are presented solely by the authors, and neither The Times of Israel nor its partners assume any responsibility for them. Please contact us in case of abuse. In case of abuse,
Report this post.

A crowd formed around the protective barrier. People inched forward, but all one had to do was look up. There stood a gentle, delicate doorway filled with a mosaic of shattered glass. The cracks between each and every little fragment were interrupted by huge circular intrusions, an ominous presence that didn’t belong. It seemed as if a perfectly crafted spider web was ripped open by the nearly-green colored toxins remaining from blunt force.

The same natural force that held together the building of the Central Bus Station, the Tachana Mercazit, was used to fracture it at its seams. The glass of clarity became cracked, and the entrance toward exploring the country of Israel–toward the gray zone of being neither here nor there during transit–became stained by the rocks of hatred, corrupted by the strife of politics, and changed into a space no longer to simply pass through with luggage heading toward one’s next destination.

Why would those who supposedly only disagree with Israel’s policies throw stones and engage in other such brutal and rash actions? Firstly, the question raised needs to be changed. Some Americans may disagree with Trump’s proposed policies, but that doesn’t mean they would go so far as to stone him at speeches or stab his supporters. Disagreeing with policies or even rights to land wouldn’t cause such severe violence in the twenty-first century. What does, though, is pure, untainted hatred. Therefore, the question raised when seeing the Central Bus Station is why would those who hate Israel and its inhabitants throw stones? But there doesn’t need to be an answer; hatred knows no bounds nor does it have any reason.

Shattered glass at the gateway for transportation in Jerusalem serves as the central symbol for the banality of destruction, terror, and murder. With broken-glass bus shelters on main streets, like Sderot Eshkol, and stabbings in the Old City, what remains of the city space is, however odd it seems, normal. Therefore, “safe spaces,” unlike in other countries such as the US, take on a new meaning in Israel and, moreover, in the country’s epicenter of Jerusalem. Seeing a man walk on the streets of New York City with an M16 would cause mass panic to ensue and fear to run amuck amidst the pedestrians. On the streets of downtown Jerusalem, seeing the same sight provokes no such negative feelings and, rather, instills those passing by with hope and, eerily, a sense of security.

Whether Jerusalemites are simply ignorant to their everyday reality, have become jaded to the violence around them, or perhaps choose consciously to approach their surroundings in a way that strengthens their souls, the city still stands in stark opposition to what most Anglos would deem peaceful. However, Jerusalem’s shattered glass at the doorway of its Central Bus Station proves the old English adage ironically right: sticks and stones may indeed break its “bones,” or infrastructural framework, but the spirit, mindset, prayers, and words of a nation serve as its strongest defense. So as the shattered glass still remains in place for over a week, surrounded by barriers and colored tape, people continue to walk through the adjacent doors, and board buses to arrive at their next stop.

Postscript: The glass doors at the entrance of the Tachana Mercazit were replaced over the past two days (the week of February 18). The shattered glass, the mosaic that  transgressed the otherwise seamless glass is now no more. Yet fragmented or whole, Jerusalem’s population remains strong, vibrant, and complete.

About the Author
A geographer, performance theorist, vegan, and yogi, Ruchie Zema always seeks different avenues to connect her diverse passions. Raised near Monsey, NY, she fervently studied ancient Hebrew poetry and the Talmud before heading to Brown University for her undergraduate education and Latin America for service work and research. Her adventurous spirit and commitment to action always keeps her on the go around the world. She is currently calling Israel home and hopes to foster a sense of community, inspiration, and spirit for her readers.
Related Topics
Related Posts
Comments
Advertisement