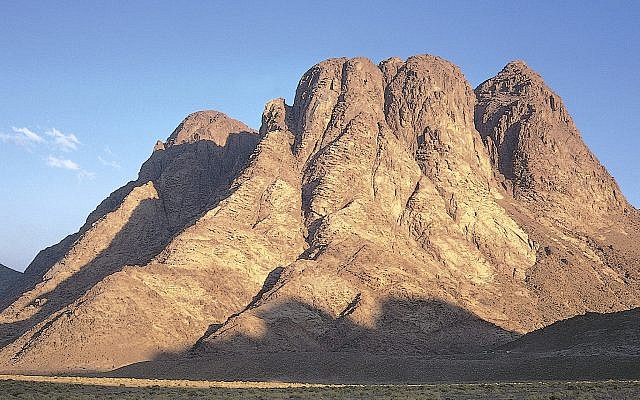 We are all probably familiar with the name of the site of the greatest mass revelation of G-d’s existence — Mount Sinai. However, throughout the Bible that place is variously mentioned under other names. These names include “Mountain of G-d,” “Mount Bashan,” “Mount Gavnunim” (Psalms 68:16), “Mount Hemed” (Psalms 68:17), and “Mount Horeb” (Exodus 33:6). Various Midrashic sources offer different interpretations of how all of these terms refer to one mountain and in the following paragraphs we will explore some of those ideas and how they relate to the holiday of Shavuot.

The mountain is called Har ha-Elokim, “Mountain of God,” because that is where the Jewish people accepted upon themselves the Godhood of the Creator. Additionally, of all the potential mountains on which God may have revealed His glory, Mount Sinai was the most fitting because it had never been previously worshipped by idolaters, while other mountains were, in fact, deified by such people. Moreover, the term Elokim (“Almighty”) as opposed to the Tetragrammaton implies G-d’s trait of judgement, an allusion to the fact that on Mount Sinai, He assumed the role of a “judge” in revealing to the Jewish People all the civil laws of the Torah (i.e. from Exodus 21 and onwards).

Mount Sinai is called Mount Bashan because the name Bashan is a portmanteau of the phrase ba sham (“He came there”), as the commentaries point out that the constants n and m are so similar that they are sometimes interchangeable. This phrase speaking about His “arrival” refers to G-d’s arrival at the mountain in anticipation of giving the Torah. Alternatively, the word Bashan is an abbreviation of the word bi-shinav (“with his teeth”) and alludes to the fact that everything which the Jewish people enjoy “with their teeth” (i.e. all material success, typified by agricultural fecundity) is in the merit of their adherence to the Torah.

The name Mount Gavnunim is related to the Hebrew word giben (Leviticus 21:20) which is a blemish that disqualifies a Kohen from service in the Temple (in specific, it refers to abnormally long eyebrows). This is similar to Mount Sinai whose cleanness from idolatry “disqualified” all the other mountains by contrast, rendering them unfit for the giving of the Torah. Alternatively, the Midrash explains that the homiletic similarity between the name Gavnunim and the Hebrew word gevinah (cheese) recalls the fact that at the Sinaitic Revelation, all Jews who suffered any ailment or handicap were miraculously healed. Just as cheese is made by separating the most pristine curds of milk from any impurities (i.e. whey), so were the Jewish people at Mount Sinai in their purest state and nobody had any physical blemishes. Interestingly, some explain that the custom to eat dairy foods on Shavuot is related to Mount Sinai’s alternate name and its comparison to cheese.

Mount Hemed (Har Chemed in Hebrew) is another name for Mount Sinai because G-d desired (chemdah) to dwell His presence upon that mountain in specific. It is also called Mount Horeb (Har Chorev in Hebrew) in allusion to the word cherev (“sword”) and refers to the fact that the Sanhedrin received its right to implement capital punishment from the Torah received at Sinai. Of course, the mountain’s most popular name is Mount Sinai. This alludes to the fact that from that place comes “hatred” (sinah). Opposition to the Jewish people (i.e. “anti-Semitism”) stems from a deep hatred and resistance to the Torah and its values. That antinomian attitude began as opposition to the Jews’ cosmic role assumed at Mount Sinai.

Finally, some versions of the Midrash say that Mount Moriah is another name for Mount Sinai. The Zohar famously explains that Mount Moriah is called so because of the abundance of sweet-smelling Myrrh that is there. This is somewhat problematic because Mount Moriah is understood to be the place upon which the Holy Temple was built—in Jerusalem, not in the Sinai desert! Indeed, Rabbi Yehuda HaLevi (1075–1141), the famous poet and author of The Kuzari, writes in his song Yom Shabbaton, “He spoke through His holiness on the Mountain of Myrrh/You shall remember and guard the Seventh Day”. By writing that the commandments to observe the Sabbath were given on the Mountain of Myrrh, he also implies that Mount Moriah is the same as Mount Sinai. The simplest way of resolving this issue is that there are two different mountains which are both named Moriah. However, some of the most prominent Ashkenazi Kabbalists such as Rabbi Berachiah Baruch Shapiro (d. 1663) and Rabbi Naftali Katz (1649–1718) explain that Moriah and Sinai are actually the same mountain, and when G-d gave the Torah in the Sinai Wilderness, He uprooted the mountain from its regular place in Jerusalem and brought it to the wilderness, only to return it afterwards.