Everybody knows we read the story of Ruth who converted to Judaism on Shavuot. What is even more remarkable is the Impact of Converts and their descendants on the development of the Jewish People. I have written in previous blogs on the impact of great personalities who were either converts or descendants from converts – King David, Rabbi Akiva, Onkelos, Avtalyon, and Sh’maya.

Fast forward till today, and we know of Righteous Converts who inspire us with their passion and love of Israel and the Jewish People. Many of these come from serious Christians Families and went through much soul searching and heartache on their journey. We can learn a lot about this desire and perseverance, It is this desire and inspiration that we must embrace. Many Christians have strong emotions about the Jews and Israel. Some Negative but there are many groups that are Pro and want to join or support the Jews.

However, there is still the danger of missionizing. Recently, a New TV Channel was allowed in Israel called God TV which highlights this dilemma. God TV Responds to Critics: ‘We’re Not Trying to Convert Jews; We Just Want Them to Accept Jesus as the Messiah’ The Regulatory body in charge of broadcasting in Israel is currently investigating whether God TV, which launched its new Israeli channel two weeks ago, is in violation of its terms of license, which forbid proselytizing. This is an ongoing saga with

I have written in the past on this rocky dilemma. Many of these Christians see a fulfillment of Biblical Prophecy in the establishment of the State of Israel and the return of the Jews after 2000 years. There is a growing group who believe they are from the Lost 10 Tribes and they themselves called themselves Ephraimites, Noahide, etc.

They keep many of the Jewish commandments, like kashrut, Shabbat, and the holidays and they visit Israel regularly. Many of them started to question their own Christianity and inconsistencies in the Old Testament and New Testament vs the Torah.

What is interesting is that they are not looking to convert to Judaism, but they keep the commandments as goyim. Many do not rule out the role of Jesus in their beliefs. We Jews may see that as a contradiction.

One of the early pioneers in building bridges with the Christian Community was Rabbi Yechiel Eckstein z”l whose life story is documented in his biography the Bridge Builder. It is a fascinating read. Quite personal and juicy. It would make a great film.

I want to share a few of the themes that have come out from his biography. I will deal with each one separately.

1. How Parenting has the power to build or destroy
2. Dealing with Adversity
3. Jewish Christian relations with Israel.
4. An Alternative view of organized Judaism 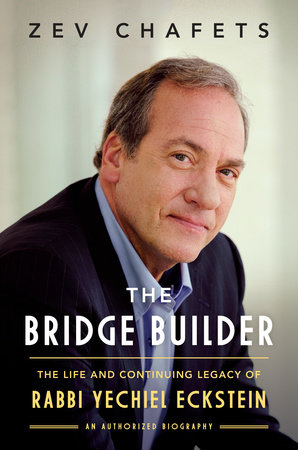 On parenting, Yechiel in his own words had parents who were very strict, distant, and cold and put him down. This resulted in a need to seek approval and outside attention,. However, the need to prove yourself worthy after facing adversity can have a very positive side effect.

Yechiel throughout his life faced Adversity. He did not choose the easy road.
He charted a minefield in trying to overcome 2000 years of history of a lot of Christian persecution of the Jews.

He discovered the Christian Zionists by accident while working for the ADL in Chicago. While there was strong support for Israel as the Evangelical Christians followed the Bible, which states that those who bless Israel will be blessed and those who curse Israel will be cursed. However, there is also a call to missionize.

One issue that was very apparent there were many Christians who learn Torah, keep Shabbat & the Festivals, but still believe in Jesus. In other words, they did not see a need to convert to Judaism.

There were many hurdles to creating this Bridge. There was a question if these people sought to missionize and convert Jews to Jesus. And this is what Yechiel encountered some 40 odd years ago. it was very clear that despite their support for Israel, they saw a clear calling to missionize Jews. This was obviously a deal-breaker and Yechiel worked very hard to change this attitude and came out the phrase the Christians are Witnesses to the Jews returning to Israel and enabled them to be a partner in the miracle of the Jews return to their ancient homeland. It was not easy for Yechiel to overcome this minefield. His life was one of ups and downs in support, criticism, and understanding of his approach. This approach not only ruffled feathers in the Christian world but made him a persona non grata in both Haredi and National Religious circles and his organizations were frowned on or banned as Christian’s intention and history are still viewed as beyond the pale. However, he successfully launched the biggest giving Charity in Israel and helping poor Jews around the world.

Certain organizations like Chabad and the Jewish Agency and the JDC did partner with him. I am not going to expand on this by rather focus on his views of Judaism.

In 1988, his activities were considered beyond the pale, and he basically was not welcome in his Kollel and Shuls, and hence it was very awkward and difficult to go to Shul. So, he started the practice of praying at Home.

I will now digress and go back to his yeshiva days. He felt that formal prayer was dry and rote and lacked passion. He himself was a musician and indeed he had a wedding band to help make ends meet. He continued to perform and use music to inspire. He was also enamored with the passion and music of the Gospel choirs. He felt that he was able to pray, meditate more spiritually outside the formal synagogue setting. I am surprised he not did do more to make our Shuls more spiritual and create a network of the House and Love of Prayer.

He was very much concerned with helping Jews physically and materially. In this regard, he will be remembered for greatness.

As the book is titled, he was a bridge-builder. An important bridge was started with Christian supporters of Israel. Today, the fellowship is the largest Charitable Organisation providing support to Holocaust Survivors, Survivors of Terror, Orphans, poor Families, and more https://www.ifcj.org/who-we-help/

One can ask, what about Spiritual building bridges with our Jewish brethren, who by lack of inspiration and assimilation are becoming extinct and not only will not be part of the Jewish people but as we see are siding with those against the historical right of the Jews to their only Homeland.

So, as the descendants of Yechiel ponder on how to continue his legacy and embark on new projects, it may be a time and opportunity to explore more ways to help Jews come closer to their heritage and make Aliyah by fostering a more vibrant, open, spiritual Judaism.