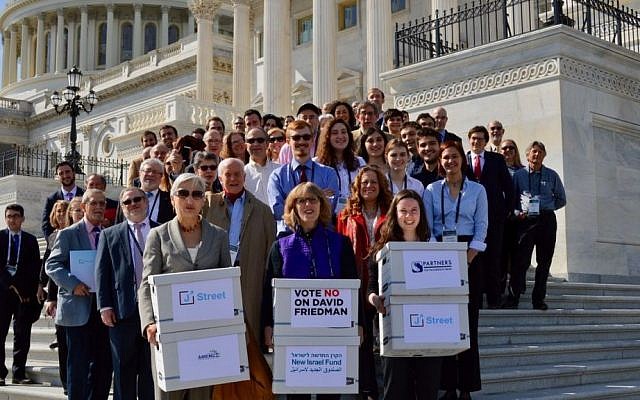 A sign of the polarization of American Jewry: J Street activists deliver a petition to the US Senate opposing the nomination of David Friedman as ambassador to Israel, February 28, 2017. (J Street/JTA)

An Open Letter to Sheldon Adelson and George Soros:

It’s time to talk. Anywhere, anytime. In my office, if you wish. Southern Connecticut is centrally located, an easy drive from George’s Westchester home, where I once performed a wedding, and Sheldon’s old Boston area haunts, where I grew up.

But this is not about me.

For you, George and Sheldon, are the polar axes of the Jewish world. Yes, the Jewish people are now bipolar, half Adelsonian particularists and half Sorosian universalists, and we spin around you. With apologies to the non-Jewish world, which the two of you have greatly influenced, this is not about them, either.

This is a matter of mishpacha, family, a term that both of you know well. Just seven decades after the Holocaust, the remnants of the Jewish people are splitting at the seams, and right now neither of you seems to care about that. But I suspect that you do.

Last year, when Sean Spicer made ill-advised comments downplaying Hitler’s atrocities, you, Sheldon, were the one who set him straight and steered the Trump administration away, even if only temporarily, from the path of anti-Semitism and Holocaust denial.

And you, George, while you deny being a practicing Jew or a Zionist, you openly profess to having “a great deal of sympathy for my fellow Jews and a deep concern for the survival of Israel.”

So let’s put that to the test.

While the Lauders, Bronfmans, Steinhardts, Schustermans and others have had a tremendous impact on Jewish life and Israel, they have neither been as impactful nor as demonized as the two of you. You represent the left and right extremes of both American and Israeli politics, and vicious attacks on you have come from Jews and non-Jews alike. While my views tend to reside somewhere in between, I feel personally attacked when I see how you both have been singled out.

Now you may not care, George, that half of Europe has turned you into Shylock incarnate — and that even Prime Minister Netanyahu has foolishly piled on. Or that the Republican party decided to use your image as a dog whistle in an ad on the eve of Election Day, 2016. And it may not even bother you that Roseanne Barr dragged you into her most recent racist, anti-Semitic Twitter rant.

And you, Sheldon, may not be bothered about being the subject of an anti-Semitic cartoon in the Boston Globe, with an exaggerated hook nose, or the many accusations against you employing classic anti-Jewish tropes of greed and control

But as a Jew, it bothers me to see any Jew demonized — or any other human — because we know where that can lead.

Meanwhile, the split between Israel and American Jewry is widening dramatically. Since Birthright Israel was imagined two decades ago — and thank you, Sheldon, for your recent $70 million gift — world Jewry has been twiddling its thumbs, while its two main communities have been drifting apart like polar ice sheets passing in the night. Israeli politicians continue their unabated onslaught of insults directed against American Jews, and American Jews continue to respond by caring less and less about Israel. Those destructive trends must be reversed.

You, Sheldon and George, have the power to do something about it. Simply by sitting down and sharing a knish, you will be sending a powerful signal that will instantly improve the atmosphere. “If even Adelson and Soros can break bread together,” people will say, “maybe there is hope for the rest of us.”

If you could conclude that meeting with a brief statement covering areas where the two of you agree — and I’m sure you can find some — that would give us all a path for continuing the dialogue.

The alphabet soup of Jewish organizations does not include a single one that is meaningfully inclusive, in other words, one that would willingly embrace both of you. Even the umbrella of them all, the Conference of Presidents of Major Jewish Organizations, has banished J-Street, which is the equivalent of Congress kicking out California. All we are left with are echo chambers on the left and the right.

But you two can bridge those gaps. Plus, you have enough money to really make a difference. Imagine a program of universal Jewish service, helping needy Jews (a nod to Sheldon) and non-Jews (a nod to George); or expanded programs of Holocaust education, a concern you both share; or maybe assistance to Israeli hospitals that bring together Arabs and Jews. Imagine a “Soros – Adelson Cancer Center.” It would blow us all away.

And hey, you both are into media. How about an international newspaper that you both share? Free distribution to Jews throughout the world. We could call it, “Israel Tomorrow.” Articles might be color coded to reflect whether the source is S.A or G.S., but I think we’d be able to tell. Have the red and blue halves meet in the middle. You could run a weekly “Point-Counterpoint,” in the centerfold, featuring guests like Trump and Obama, or Bibi and…whomever.

I would be the first to sign on to an Adelson-Soros tour of Hebron and Hungary. If you guys could pull that off with no name calling, maybe we’ll be onto something.

I’m not expecting an instant bromance here, nor do I have any illusions that major points of conflict will be rapidly resolved. But for heaven’s sake, the Bushes and Clintons joined together. Same with Obama and McCain. And don’t forget that supreme odd couple, Ruth Bader Ginsburg and Antonin Scalia. If they can do it, why can’t you?

For the sake of Jewish unity and the future of our remnant people, why not — to use an expression you will appreciate — roll the dice?

There’s nothing to lose — except an enemy.

About the Author
Award-winning journalist, father, husband, son, friend, poodle-owner, Red Sox fan and rabbi of Temple Beth El in Stamford, CT. Author of Mensch-Marks: Life Lessons of a Human Rabbi – Wisdom for Untethered Times and "Embracing Auschwitz: Forging a Vibrant, Life-Affirming Judaism that Takes the Holocaust Seriously." His Substack column, One One Foot: A Rabbi's Journal, can be found at https://rabbijoshuahammerman.substack.com/ Rabbi Hammerman was a winner of the Simon Rockower award, the highest honor in Jewish journalism, for his 2008 columns on the Bernard Madoff case, which appeared first on his blog and then were discussed widely in the media. In 2019, he received first-prize from the Religion News Association, for excellence in commentary. Among his many published personal essays are several written for the New York Times Magazine and Washington Post. He has been featured as About.com's Conservative representative in its "Ask the Rabbi" series and as "The Jewish Ethicist," fielding questions on the New York Jewish Week's website. Rabbi Hammerman is an avid fan of the Red Sox, Patriots and all things Boston; he also loves a good, Israeli hummus. He is an active alum of Brown University, often conducting alumni interviews of prospective students. He lives in Stamford with his wife, Dr. Mara Hammerman, a psychologist. They have two grown children, Ethan and Daniel, along with Cobie, Casey and Cassidy, three standard poodles. Contact Rabbi Hammerman: rabbi@tbe.org (203) 322-6901 x 307
Related Topics
Related Posts
Joshua Hammerman
Comments