There is genius in persistence. It conquers all opposers. It gives confidence. It annihilates obstacles. Everybody believes in a determined man. People know that when he undertakes a thing, the battle is half won, for his rule is to accomplish whatever he sets out to do. -Orison Swett Marden

God chose Abraham to found the Chosen Nation. His first son, Ishmael, from an early age already, didn’t really follow his father’s footsteps. God tries again with Abraham’s second son, Isaac. Isaac is blessed with twins. The firstborn, Esau, while retaining good relations with his father, was not cut out to continue the path of Abraham. God continues with the second twin, Jacob. Finally, after the third generation, Jacob has twelve sons and they all continue in God’s path. They are the founding tribes of the Nation of Israel.

The Baal Haturim on Exodus 1:5 compares the above chronology to an architect who builds a palace. The architect’s first effort was with one pillar. The palace did not last long. He tried again with two pillars. Same result. He tries once again with three pillars with the same failure. Finally, he goes all out and designs the palace with twelve columns. The palace remains steady until this day.

May we never be discouraged by defeat or failure in our noble enterprises. Persistence is key to success, which are both divine qualities.

To the Jewish summer communities of Las Toscas and Atlantida. We are looking forward to a special Shabbat together.

About the Author
Ben-Tzion Spitz is the former Chief Rabbi of Uruguay. He is the author of six books of Biblical Fiction and hundreds of articles and stories dealing with biblical themes. He is the publisher of Torah.Works, a website dedicated to the exploration of classic Jewish texts, as well as TweetYomi, which publishes daily Torah tweets on Parsha, Mishna, Daf, Rambam, Halacha, Tanya and Emuna. Ben-Tzion is a graduate of Yeshiva University and received his Master’s in Mechanical Engineering from Columbia University.
Related Topics
Related Posts
Ben-Tzion Spitz
Comments 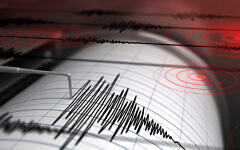