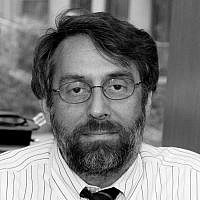 The Blogs
Jay Bernstein
Apply for a Blog
Please note that the posts on The Blogs are contributed by third parties. The opinions, facts and any media content in them are presented solely by the authors, and neither The Times of Israel nor its partners assume any responsibility for them. Please contact us in case of abuse. In case of abuse,
Report this post.

Why would an organization dedicated to promoting “serious Jewish thought about the enduring questions of human life and the pressing challenges that confront the Jewish people” associate with a man responsible for one of the ugliest remarks ever made to an American President concerning the Jewish people?

This question is prompted by the shockingly misguided decision of the Tikvah Fund, a prominent philanthropic organization, to invite Henry Kissinger to serve this coming fall on the faculty of a seminar discussing “Moments of Decision, Great Debates: Judaism in the 20th Century.”

Three years ago, the Nixon Presidential Library and Museum released 265 hours of White House recordings, which included a March, 1973 exchange between President Nixon and Kissinger (then serving as the President’s national security adviser). The conversation followed a visit to the White House by Israeli Prime Minister Golda Meir, who asked Nixon and Kissinger to press the Soviets to permit Jews to emigrate. Kissinger’s remarks to Nixon in response to Meir’s request were brutally direct:

It would have been bad enough – and wrong – had Kissinger said that the oppression of Jews was an internal Soviet matter which should not concern the United States. But Kissinger went much further, callously and cruelly giving pre-approval to another Holocaust to ingratiate himself with Nixon as a Jew whose loyalty was beyond reproach. As noted by Professor Michael Berenbaum, Kissinger was “crawling on his hands and knees, betraying his family, his people.” The comments are all the more reprehensible coming from a Jew who lost many relatives in the Holocaust, and who himself might have died in a gas chamber but for his family’s escape from Nazi Germany in 1938.

In light of this and other despicable comments (other tapes record Kissinger denouncing Jews as the most “self serving group of people” on the planet for lobbying the White House on behalf of Soviet Jewry), no self-respecting Jewish organization should associate in any way with Henry Kissinger. Instead, groups like the Tikvah Fund should implement the policy recommended by the writer Christopher Hitchens: “Henry Kissinger should have the door shut in his face by every decent person and should be shamed, ostracized, and excluded.”

Interestingly, just seven months before the disclosure of the tapes containing Kissinger’s revolting comment, the late Helen Thomas notoriously stated that Jews should “get out of Palestine” and “go home to Poland and Germany.” Ms. Thomas was roundly condemned for these remarks, forced to retire, and rightly relegated to obscurity.

As bad as Helen Thomas’s comments were, Henry Kissinger’s remarks to Nixon were far worse — worse for coming from a Jew in a position of immense power; worse for being told directly to the President; and worse for its revolting attitude towards Jewish suffering. That being the case, the the Tikvah Fund’s shameful association with Kissinger should promote as much outrage and indignation as would have undoubtedly greeted a decision by the organization to invite Helen Thomas to serve on the faculty of one of its seminars. Jewish pride and honor demand no less.

About the Author
Jay Bernstein is a graduate of Yeshiva University, Baltimore Hebrew University and NYU School of Law. He is the founder and host of Baltimore's weekly Jewish-affairs radio program, Shalom USA and vice president of Baltimore Zionist District.
Comments