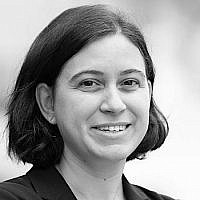 The Blogs
Ashira Konigsburg
Apply for a Blog
Advertisement
Please note that the posts on The Blogs are contributed by third parties. The opinions, facts and any media content in them are presented solely by the authors, and neither The Times of Israel nor its partners assume any responsibility for them. Please contact us in case of abuse. In case of abuse,
Report this post.

Ironically, I came across Yehuda Kurtzer’s op-ed Time for a (Social) Ceasefire via Facebook. The diversity of the friends and colleagues who shared it piqued my interest, so I clicked. In his piece, Kurtzer laments that social media has failed to “improve public discourse” around recent events surrounding Israel and, in response, he suggests that we take the 17th of Tammuz as a virtual taanit dibur. A taanit dibur is a somewhat ascetic practice where individuals refrain from speaking in order to engage in self-reflection. While it is laudable to encourage intentionality and introspection, Kurtzer misses the point about the nature of social media.

The plethora of ideas, commentary and, yes, even attacks can be part of what it means to take part in social media. But one cannot generalize from their individual feed to the entirety of social media. Each of us curates our network of Facebook friends and Twitter followers and therefore each feed is unique.

Is there drivel online? Of course there is, and it’s posted by peoples on all sides of every issue. There are also an unfortunate number of hateful posts, but condemning the entirety of social media is akin to suggesting that we cut back on visits to the library because it contains trashy novels and offensive works.

We ought not to draw overly broad conclusions from how any individual chooses to post, read, click or reply. While some people do respond with “accusations of fascism” or “naive self-hatred” or “come across as preachy, paternalistic, and astonishingly self-aggrandizing,” others have used these tools to connect, inform, educate or amplify ideas and ideals.

By seeing tweets from Tel Aviv and Jerusalem, we better understand the impact of sirens and rockets and the fierce desire to nevertheless live as ‘normally’ as possible. We follow reporters to see photos of the damage done by both rockets and Israeli air strikes and to get a sense of what is happening in the danger zones. By reading analysis from pundits, both professional and amateur, we consider ideas that hadn’t occurred to us, and Twitter can show us how the rest of the world is responding to the current crisis.

In fact, social media can do more than help us get information and exchange ideas. We can, of course, use it to check in with family or friends who are affected by the violence, but adept users find additional ways to benefit from their virtual communities. For example, consuming difficult news alone can be challenging. By genuinely sharing our thoughts we can connect with others working through similar emotions. Another compelling use was described by Esther Kustanowitz, a week and a half ago in Haaretz. She argued that tweets and posts in reaction to the kidnappings and murders of Eyal, Gilad, and Naftali became a form of “contemporary prayer,” a way “to express both anguish and wishes for peace, to take hopeful action and attempt to connect with other people as well as something bigger.”

Traditionally a taanit dibur permits one to speak works of Torah. Even though many Jews today believe that there can be great value in conversations that are not about Torah, perhaps those who find the idea of a virtual taanit dibur compelling could, instead of withholding completely from the discourse, begin to cultivate a practice of responding intentionally — ensuring that what they are about to say is a worthwhile and positive contribution to the discussion.

But in doing so, let us not make the mistake of treating all of social media as if it is itself the culprit. Like any tool, its usefulness depends on how it is wielded. In the wake of the past few weeks let us recommit ourselves, not just on a single Tuesday, but every day, towards using social media to learn, connect and build relationships.

About the Author
Rabbi Ashira Konigsburg is Chief Operating Officer of the Rabbinical Assembly, the professional international association of some 1700 Conservative and Masorti movement rabbis around the world.
Comments