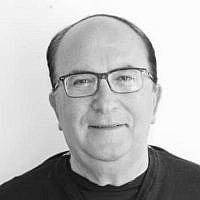 The Blogs
Igal Galai
Apply for a Blog
Please note that the posts on The Blogs are contributed by third parties. The opinions, facts and any media content in them are presented solely by the authors, and neither The Times of Israel nor its partners assume any responsibility for them. Please contact us in case of abuse. In case of abuse,
Report this post.

As Warren Buffet said, when the tide goes out you discover not only those who have been swimming naked, but you can see all the swimmers with all their qualities: the brave and the cowards, decent and deceptive, true leaders and the misleaders. The Bible is full of stories about false prophets and true prophets

For many years I have advised to wise and intelligent people, who have also found themselves in momentous crisis. I always remembered the Dalai Lama’s saying, “When you speak you are just repeating what you already knew”, but I have always memorized the other part of the saying: “if you listen you may learn something new”. And so my first and immediate advice was – listen – hear what your people have to say. Pay attention to it with genuine attention and intention. Hearing them directly and not through those who are around you, including the consultants.

It seems like simple advice, but very difficult to implement, especially for those who feel themselves as above the people. Should they listen? Is there anyone smarter than they are? If they were as smart as they claim they are – they should have been in the chair I’m currently sitting in. This arrogance accumulates strength and momentum as the man in his high office more often than not. Anyone who does not know how to listen – will not hear your advice anyway. It is just a waste of time.

Ariel Sharon was the king of listeners. He was respectful of what he heard even if, in the end, he decided to choose another path. If you choose a path – be loyal to it. This simple rule is known to everyone who as a junior commander has taken the class on navigational journey. If you have a suspicion that you have chosen the wrong path – you need to have the courage to return to square one and from there outline a new path.

The simple statement that we hear in Waze ‘recalculating a new road’ becomes a heavy burden for the so called “important people”. Should I choose to re-route? No way! In other words, we must let go of the burden of self-importance in order to see the mission as the main goal, and if needed to admit we are wrong, is another simple advice but also a very difficult one to implement.

Ronnie Milo was the king of this practice. When he had to change the way it was very impressive, even if he went through the torment of Yitzhak Shamir, who could not imagine a new way, which contradicts everything they had believed until then. The elected – no matter to what role – must estimate the true prospect of its plan. Proper assessment will be the fuel that will run its engine. Moshe Gavish, in his position as chairman of the Broadcasting Authority, was the king of odd calculation. I am convinced that many of the former Broadcasting Authority employees today regret they did not listen to him.

Every person in a public position must believe in his or her own path, otherwise it is a shame for all their efforts and his advisers can go home. Benny Begin was the man who led the “listening process” with the Bedouin people in order to arrange their new settlement in the Negev. He abandoned or was abandoned, but for a moment he did not lose his faith in the way that was put into great effort.

I have demonstrated only four examples of characters which whom I have worked alongside over the years, and stated a couple of simple advices. It is the simple things that hold the most – but we can agree to act upon it if the leaders of Israel, who are now leading us at this difficult time, are content with this state of mind.

About the Author
Igal Galai is the founder of the public relations company Galai Communication & PR - the gateway to the Israeli public. Galai is an editor and writer who has served as a personal advisor to Prime Minister Ariel Sharon. He has worked on the Prime Minister's public relations teams during Prime Ministers Ehud Olmert and Benjamin Netanyahu's terms in office.
Related Topics
Related Posts
Comments