April is a giddy time for those who love Passover, poetry, and Shakespeare: the month ushers in the holiday, National Poetry Month, and the Bard’s birthday.

As I scrape a year’s worth of detritus off of my kitchen shelves and layer aluminum foil over my stovetop, my mind wanders to Shakespeare’s sonnet on slavery. Sonnet 57 is a favorite, because it’s one of the best odes to the passive-aggressive in all of us.

Being your slave, what should I do but tend

Upon the hours and times of your desire?

I have no precious time at all to spend,

Nor services to do, till you require.

Nor dare I chide the world-without-end hour

Whilst I, my sovereign, watch the clock for you,

Nor think the bitterness of absence sour

When you have bid your servant once adieu;

Nor dare I question with my jealous thought

Where you may be, or your affairs suppose,

But, like a sad slave, stay and think of nought

Save, where you are how happy you make those.

So true a fool is love that in your will,

Though you do any thing, he thinks no ill.

Helen Vendler, one of the foremost poetry critics today, notes that the poem relies on this passive-aggressive stance, repeating the words “no” and “nor,” to reveal that what the poet is doing is all the things he says he isn’t. He is watching the clock, the hours without the young man do seem to drag on forever, and he is obsessing over who the young man is with when not with the writer. In short, the Bard is in fact a “sad slave” to the young man, and the rhyming couplet at the end of the poem explains it all: Love is a fool, it makes slaves of us, so that no matter what a beloved may do, the lover remains constant. Because he’s Shakespeare, he also poetically, whimsically, but somewhat sadly too, plays on his name at the end: his “Will[iam]” will remain true no matter what the young man does.

What makes this poem appealing is that at first it appears light, almost careless, but then it becomes more sinister, as we realize that Shakespeare is enslaved by his feelings; ironically, he is without “Will.” Vendler points out that the slyness of the sonnet rests in the fact that though Shakespeare is bound to and employs the terms of slavery, he also breaks those terms by expressing himself in a passive-aggressive way. The negative language introduces what he really feels, and it gets us — and presumably the young man — to envision how Shakespeare is spending his time as he waits for him. What’s beguiling about Shakespeare, particularly in his sonnets, is his awareness of the psychological states, many of them quite negative, dangerous, and destructive, in which he places himself. Self-awareness is crucial to ending an enslavement to harmful behaviors.

As I wash out cabinets and clean out my pantry, finding and discarding matzah meal from last year’s Passover, I think about Morah Nachama Leibowitz’s analysis of Pharaoh’s behavior in the Exodus story. Commentaries have puzzled for centuries over the idea that God would harden Pharaoh’s heart. One of the tenets of Judaism is that humankind has free will, so why does it seem as if God removes that free will from the Egyptian ruler? Morah Leibowitz cites Maimonides’ explanation that Pharaoh habituated himself into evil. She writes:

“At the beginning . . . man is free to choose any path of action he desires. He is afforded equal opportunity to do good or evil. But as soon as he has made his first choice, then the opportunities facing him are no longer so evenly balanced. The more he persists in the first path of his choosing, shall we say, the evil path, the harder will it become for him to revert to the good path. . . . In other words, it is not the Almighty who has hampered his freedom . . . . He has, by his own choice and persistence in evil, placed obstacles in the way leading back to reformation.” 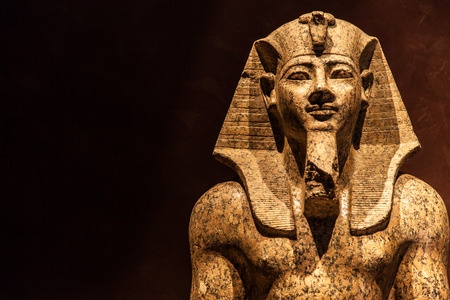 Is Pharaoh an example of someone who has become a slave to his own behavior?

My colleague Dr. Shira Weiss, who introduced this explanation to me, provided the example of an addict who at first might have chosen to smoke, drink, or use drugs, but then became unable to break free of that behavior. And we also can turn to Shakespeare for an illustration of Maimonides’ theory, in the character of Macbeth, a loyal nobleman of the Scottish king who kills the king and then has to keep killing to retain the throne. He becomes so inured to murder and evil that he recognizes “I am in blood stepped in so far that should I wade no more,/Returning were as tedious as go o’er.” He likens the blood he has spilled to a river he has waded into, and has ventured so far deeply into crossing it that he cannot return. Shakespeare’s besotted lover, though “will”-less, seems positively benign when compared with these more evil examples.

But, of course, on Passover we’re also focused on what it means to be an actual slave, not only a person tethered to her own faults and potentially destructive habits.

Over the course of the past school year, I’ve given myself a “racism curriculum.” It began over the summer, when I read Colson Whitehead’s “Underground Railroad,” at the same time that I had assigned Rebecca Skloot’s “The Immortal Life of Henrietta Lacks” to a class of juniors for summer reading. Like any graduate of the American school system, I knew about slavery, and of course I had taught racism in America for decades. But for some reason the two works struck a chord, and I was soon done with Harriet Beecher Stowe’s “Uncle Tom’s Cabin” — which strangely I’d never read! — and Fergus Bordewich’s “Bound for Canaan,” which was a source for Whitehead when he wrote his novel. The premise of “Underground Railroad” is that the railroad is an actual train line that takes escaped slaves to different places and times, where they confront racism in different forms.

I’m now reading “The Half Has Never Been Told: Slavery and the Making of American Capitalism” by Edward Baptist, and as I unnecessarily decide to do spring cleaning in my children’s rooms — they’re too old for me to worry that there’s bread in their rooms, but I’m cleaning anyway; why not? — I find myself remembering a vivid image from Baptist’s book. It’s of a slave coffle being taken down to Georgia. Black men were chained to black men; black women — pregnant and not — were chained to other black women.

“The same heavy iron stringer now joined [Charles] Ball [a slave who was sold down to Georgia, away from his wife and family] to the other thirty-two men. . . Then, for the last step in the process, the blacksmith took two bands of iron, put them around Ball’s wrists, and pounded down bolts to fasten the manacles. He attached the manacle on Ball’s right wrist by a short chain to the left manacle of the next man on the neck chain. The two of them would have to walk in step and next to each other. . . . Ball sat stoically, but on the inside, his emotions ran . . . wild: I wish I had never been born. I want to die. I cannot even kill myself because of these chains.”

As Baptist poignantly writes, “The coffle-chains enabled [slave traders] to turn feet against hearts, to make enslaved people work directly against their own love of self, children, spouses; of the world, of freedom, of hope.” Just as each time you examine the Holocaust and wonder how it could have happened, each time you read another story of slavery, you boggle at how a country ostensibly founded on liberty could sanction it.

Slaves were aware of the irony: in 1810, a coffle marching past the steps of the Capitol building saw congressmen taking a cigar break and began singing the patriotic song “Hail Columbia,” a moment captured in an illustration in 1839. 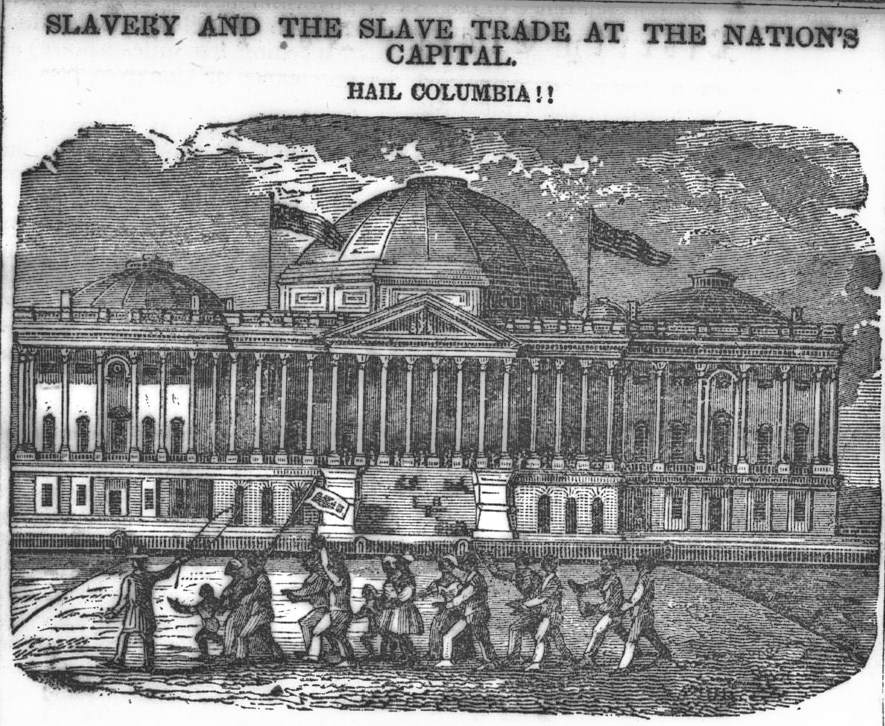 Obviously slavery is on our minds a lot this season. You can start with the jokes about the enslavement of those — mostly women — who are making the holiday, but in truth, as I clean and freshen the house my husband and I own in a lovely and crime-free neighborhood, as I feel grateful for the family and friends who have flown in for Passover and with whom we will share meals, I know that I’ve been born in a very fortunate time and live a very privileged life.

There’s a psychology to cleaning. It makes us feel lighter to throw things away, it makes us feel good to air out our homes and have them look neat and clean. In Judaism, we’ve attached that ritual to one that has resonated deeply not only among our co-religionists but all over the world. The freedom to be in possession of your own things, including your own person, is one that cannot be taken for granted.

Shakespeare, and indeed the character of Pharaoh, remind us that sometimes enslavement comes from dark forces within ourselves, while the history of American slavery recalls the ugly and barbaric practice we commemorate on our holiday. Identifying with both has been useful for me, as I spray Windex on my windows. We have a responsibility to “see ourselves as if each one of us has individually exited from Egypt.”

The process of preparing for Passover helps us reach that goal. It reminds us that we all have a will that bends toward God and toward man; the arc we create when we remember to be thankful we’re not slaves is between the One who liberated us and others who yearn for either psychological or physical freedom. Let’s help them get it.