The Chief Rabbinate of Israel has been usurped by ultra-Orthodox rabbis who are introducing medieval thoughts and practice that radically oppose those of the founder of the Chief Rabbinate, Rabbi Abraham Isaac Kook. My new book Photograph God: Creating a Spiritual Blog of Your Life extends into the networked world the ideas of Rabbi Kook and the other leading Orthodox rabbis of the 20th century, known as The Rebbe and The Rav.

Rabbi Yitzhak Yosef, current Chief Rabbi, has begun a campaign against using smartphones that follows banning television sets and computers. In his weekly sermon on the haredi radio station Kol Bararma, he categorically barred smartphone users from leading prayers and other Jews from participating. Yosef also stated, “If a yeshiva student has an iPhone, you need to remove him from the yeshiva, no doubt.” He is joined by other haredi Luddite leaders in cutting off their followers’ connection to the majority of world Jewry who use smartphones and keeping them ignorant of the world of information available through the Internet.

Photograph God teaches how to use a smartphone to create a spiritual blog that demonstrates Rabbi Kook’s view “The old will be renewed, and the new will be sanctified” that brings the biblical wisdom “Acknowledge God in all your paths” into the digital age.

The book weaves together the seminal thoughts of Rabbi Kook, Rabbi Menachem M. Schneerson, The Rebbe, and Rabbi Joseph B. Soloveitchik, The Rav, by creating a vibrant dialogue between the worlds of smartphones and the Internet and spirituality and Jewish consciousness. It teaches creative ways to find life’s meaning in the networked world by crafting “spiritual blogs.”

The Rebbe states, “The divine purpose of the present information revolution, which gives an individual unprecedented power and opportunity, is to allow us to share knowledge – spiritual knowledge – with each other, empowering and unifying individuals everywhere. We need to use today’s interactive technology not just for business or leisure but to interlink as people – to create a welcome environment for the interaction of our souls, our hearts, our visions.”

The Rav writes, “Judaism does not direct its gaze upward but downward … does not aspire to a heavenly transcendence, nor does it seek to soar upon the wings of some abstract, mysterious spirituality. It fixes its gaze upon concrete, empirical reality permeating every nook and cranny of life. The marketplace, the factory, the street, the house, the mall, the banquet hall, all constitute the backdrop of religious life.” If Rabbi Soloveitchik had lived to experience smartphones and the Internet, he would have added them to his list.

The book extends the Torah Tweet blogart project http://bibleblogyoulife.blogspot.com that my wife Miriam and I created to celebrate our 52 years of marriage.   It invites readers to create their own spiritual blogs by linking their stories to the biblical narrative. 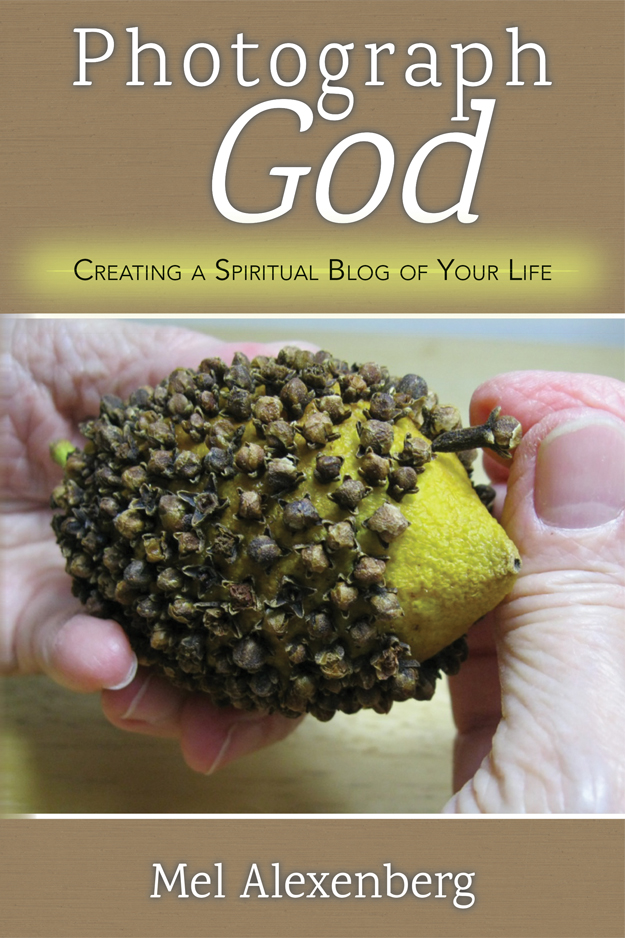 Below are reviews of the book Photograph God: Creating a Spiritual Blog of Your Life. See more reviews at http://photographgod.com.

“Mel Alexenberg transforms what sounds like blasphemy – “capturing” God in photographs and restricting Him to two-dimensional images – into a mystical exercise as we open our eyes to the Divinity found in our everyday lives. The book’s wonderful synthesis between spirituality and technology, heaven and earth, is exciting and thought-provoking. Photograph God is a practical demonstration of Solomon’s wisdom: “Acknowledge God in all your paths.” Alexenberg’s affirmation of the spiritual potential of the Internet, blogging, photography, new technologies and social media, brings to mind the dictum of Rabbi Abraham Isaac Kook, the first Chief Rabbi of pre-state Israel: ‘The old will be renewed, and the new will be sanctified.’”– Rabbi Chanan Morrison, author of Gold from the Land of Israel: A New Light on the Weekly Torah Portion from the Writings of Rabbi Abraham Isaac HaKohen Kook

“The narrative thinks brilliantly outside the box. It synthesizes the realm of the abstruse and transcendent with the realm of the concrete and immanent. It crisscrosses disciplines, from science and technology to philosophy and mysticism to art as both historical and creative phenomena. This is one of those books that other thinkers will wish they had somehow thought about how to write, and to which readers of diverse sorts will simply respond by saying: ‘wow!’” – Dr. Ori Z. Soltes, author of Fixing the World: Jewish American Painters in the 20th Century, professorial lecturer, Georgetown University, former Director, National Jewish Museum, Washington, DC

“Whether we see this book as a book of art – a mystical computer program for spiritual seeing – or a book about art – to actually see it, we must consult the beautiful blog at http://bibleblogyourlife.blogspot.com. Mel Alexenberg is a wonderfully accomplished worker on a great project: to make art a conduit for the Divine.” – Rabbi Dr. Shimon Cowen, Director, Institute for Judaism and Civilization, Australia

“In his sophisticated and highly literate book, Prof. Alexenberg weaves in a playful way the threads between contemporary digital culture and traditional Jewish wisdom. In an original way, he invites us to connect the networked world of Facebook, Twitter, Flickr, Instagram, WhatsApp and Blogspot, with the concept of the unseen God.” – Dr. Yael Eylat Van-Essen, author of Digital Culture: Virtuality, Society and Information, teaches at Tel Aviv University and Holon Institute of Technology, Israel

“Photograph God strikes a balance between Kabbalah and contemporary culture. It is literate, wise, and easily accessible. Alexenberg offers us an elegant and devout example of an evolved Jewish Weltanschauung.” – Rabbi Lawrence Kushner, author of God Was in This Place & I, i Did Not Know: Finding Self, Spirituality and Ultimate Meaning and Kabbalah: A Love Story

“Alexenberg proposes that text and image—something as simple as photos taken with a smartphone, and multiplied in their resonance by the internet—can be used as a consciousness raising tool, at once personal and collective. With such simple means, we can attune ourselves to the sacred dimensions of our lives from moment to moment. In fresh, clear language, he brings his detailed knowledge of Torah texts and what he calls “the down-to-earth mysticism of the kabbalah” to bear on daily life, showing how the annual round of sacred readings from that spiraling scroll provides prompts for deepening our personal and artistic practice.” – Peter Samis, Associate Curator, Interpretation, San Francisco Museum of Modern Art