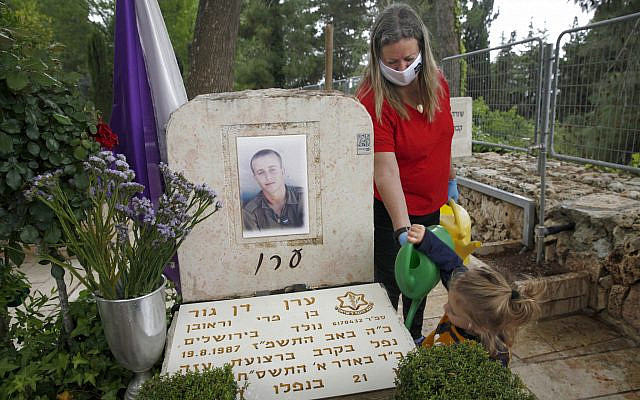 Dr. Mary Dan-Gur, bereaved mother of Eran Z"L, killed in battle in Gaza in 2008, helps her son Or to tidy his brother's grave at the Military cemetery on Mt. Herzl in Jerusalem. (Ariel Jerozolimski)

The military cemetery on Mt. Herzl in Jerusalem is for me the saddest and most emotional place in Israel. I feel deep sadness and pride for all these young people that gave their lives for our country to live. This year, with the Coronavirus pandemic, the visit became even more special and I encountered a very touching scene and story:

Dr. Mary Dan-Gur, bereaved mother of Eran Z”L, killed in battle in Gaza in 2008 helps her son Or to tidy his brother’s grave at the military cemetery on Mt. Herzl in Jerusalem wearing protective face mask and gloves.

Eran served as a combat soldier in the Shaked battalion of the Givati Brigade and was killed in an RPG attack during Operation Hot Winter in the Gaza Strip on March 1st., 2008. Ten years later, at the age of 56, his mother Mary decided to bring a new baby into the world, and Or was born in 2018 following surrogate pregnancy process.

This year family members of fallen soldiers will not be allowed to visit their beloved ones graves following the government’s measures to help stop the spread of the Coronavirus but people are allowed to shop at Ikea.

I wish both leaders and regular citizens would respect the memory of the fallen soldiers every day and not only during the Remembrance Day siren and ceremonies.