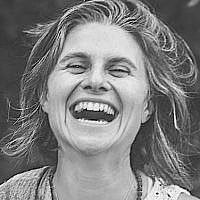 The Blogs
Melanie Landau
Apply for a Blog
Advertisement
Please note that the posts on The Blogs are contributed by third parties. The opinions, facts and any media content in them are presented solely by the authors, and neither The Times of Israel nor its partners assume any responsibility for them. Please contact us in case of abuse. In case of abuse,
Report this post.

“Returning to the good nature of who we are, opening our hearts in prayer, and righteousness (charity) avert the evil of the decree.” So is the punchline of the “Unataneh Tokef” one of the most important prayers of the upcoming Days of Awe.

Two years ago I went to Deheishe Refugee Camp in Bethlehem to visit “I.”* who had just been released from Israeli prison after 30 years.

I was a bit nervous. As I was entering his home, above his mother’s home, I saw him for the first time. He looked and felt like someone who had been through a lot and softened in the process. He had just announced his anniversary to a schoolteacher. And the wedding was due to take place in about one month’s time. He said he was like a baby and had to learn how to live again. Around his apartment was Fatah paraphernalia. He had received the full Palestinian Authority training and education in prison from his Palestinian counterparts. He gave voice to the highly organized educational and political system among the Palestinians in prison. It was all about non-violence and they were more committed to a two state solution than anyone I have ever heard, Jew or Palestinian.

“I.” was speaking to us about his experience.

As we were sitting down, “I.” got up and frantically started searching for something. He came back with a crumpled piece of paper in Hebrew, coated in plastic about 15 years old and he gave it to me to read. He didn’t read Hebrew and had it translated into Arabic. I read the Hebrew letter. He was very proud. What he gave me to read was a “thank you” letter that he had received from the Israel Prison Authority, thanking him for taking responsibility at a difficult time for the prison when many of the inmates and also the workers were overcome with an epidemic-like sickness that swept through the prison. And “I.” took leadership and did what was necessary to take care of things while there was a lack of staff and a crisis in the prison.

I was so moved to read this letter, but even more so because “I.” wanted to show us. For me, it was a big reminder of teshuvah — of returning to our essential nature — of our essential goodness. Sometimes we may stray so far from this goodness that it is hard to pick up the pieces. “I.” had health problems, I heard a little while ago that he passed away, most likely within the first year of his marriage.

We were touring the Palestinian inhabited old city of Hebron with Encounter. For those who haven’t seen it, it is hard to believe the existence of metal caging that stops Jewish residents from the Old City from throwing their dirty diapers and other debris into the Palestinian marketplace and laneways. At the time for mincha, afternoon prayer, we arrange a private place where we can pray together — either as individuals or as a minyan (quorum) depending on how many we are. This particular visit, we got permission from Palestinian “M.” to pray in his home in the old city. We went up small stairways into rooms that were at least 400 years old if not more. At the required time, he left his room so that we could pray inside it. It was very powerful for me to pray inside “M.’s” home, as a Jew, in the Old City of Hebron, with permission and blessing. It gave me a sense of a palpable and unrealized vision of what it can mean for me personally to feel connected to holy ancient cities and at the same time to be able to enjoy them in a way that doesn’t compromise my integrity or make someone else pay a burdensome price. May it be Your Will.

Which leads me to righteousness..

It says of Abraham that he believed God and it was considered righteousness (Genesis 15:6)…We just had the opportunity to host “A.”  and “O.,”  two asylum seekers from Sudan. They had been in Hulot at the Detention Center for 17 months and then in line with the recent Israeli Supreme Court decision they were released. They had previously lived and worked in Eilat and part of the court decision was that people who had been in Tel Aviv or Eilat previously were not allowed to return. So they were left in the situation of having to find places to stay in cities where they knew no one. Anyhow, thanks to the wonderful work of individuals and some NGOs, those needing accommodation were put up in people’s homes such as ours.

Both of them are intensely God-honoring individuals. They leave their shoes outside the door. As we sat together on our porch on the first night, their first night in 17 months with different food, (we mistakenly made rice which they had eaten every day) before we ate, before we even said our brachot, we just sat in silence and in gratitude for what was, for arriving at this moment. It is hard to understand what it would feel like to not know where you were going to be in 2 months — they now have received a 2 month visa — and so many unknowns further beyond that. And it seems that they will now be working for Isrotel and living nearby Cramim, the fancy hotel in the Jerusalem hills.

The journey here, through Egypt, where even their shoes were taken from them in the desert has been treacherous. The last 17 months were spent in detention, during which time they didn’t have enough access to things to do. “O.” was so happy sitting on the porch and getting to read an English book.

Everyday, “A.” prays to God 5 times. And if “O.” doesn’t do it formally, one sees how his walking in the world is a prayer, a testament of gratitude to what is and to the sacred. It was very inspiring and an absolute blessing for our family to be in the presence of two remarkable men with such live, pulsating faith and love of God. When we were speaking about the future — and possibilities for immigration like Australia and the US — “O.” said, “If God will do it, it will be for the good.” And I was silent in awe and companionship — and beholding the manifestation of Kiddush Hashem — sanctification of the name of the Divine.

*I have initialized people’s names to preserve anonymity.

About the Author
Born and raised in Melbourne, Australia, Rabba Dr Melanie Landau has 20 years of experience in guiding individuals and groups in transformative processes.and cultivating the sacred. She is committed to the creativity and vitality of a living breathing expansive Torah. She has specialisations in deep listening, conflict transformation, embodied awareness and thriving with complex trauma in particular transforming relational wounds and addictive patterns. She can be reached on: melanielandau18@gmail.com
Comments