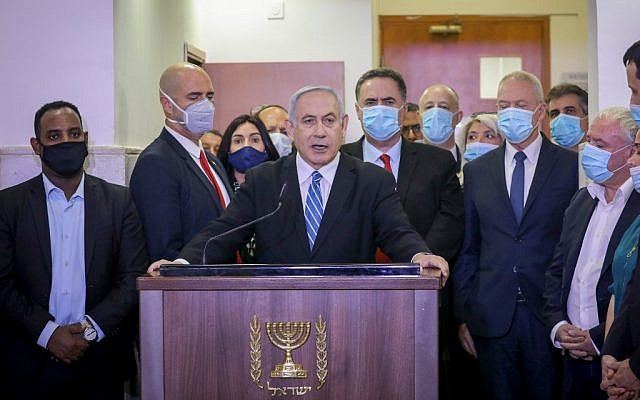 Netanyahu and his supporters in the Jerusalem Courthouse. Reminiscent of a picture taken in the Chicago courthouse at another trial in 1931. (Yonathan SINDEL / POOL / AFP)

“Then Samson reached toward the two central pillars on which the temple stood. Bracing himself against them, his right hand on the one and his left hand on the other, Samson said, “Let me die with the Philistines!” Then he pushed with all his might, and down came the temple on the rulers and all the people in it”. (Judges 16:29,30)

On Sunday, May 24, 2020, I watched as Netanyahu made history. He wore the ignominy of becoming the first sitting Prime Minister of Israel to stand trial for corruption with signature self-righteous indignation. In a display of defiance matched only by his arrogant irreverence for the awe of the occasion and his surroundings, he had the audacity to use this moment to dare to turn this occasion around and put the criminal justice system on public trial. Flanked by senior members of his party who accompanied him in a scene eerily reminiscent of the start of another trial in another country long ago, of a prominent Mafia boss, he proceeded to undermine the integrity of the court and the judges about to hear his case, using tactics of intimidation no less subtle than those employed by the defendant in that other trial. In the very courthouse where he was about to be tried.

In a democracy, the authority of the courts as the ultimate arbiter is sacrosanct and the courthouse is its temple. What Netanyahu did, more than figuratively is precisely what Samson did when he placed his hands on the pillars supporting the structure of the Philistine temple. And the destruction to the structure of our society as a democracy may well be no less devastating.

“Citizens, what is on trial today is an effort to frustrate the will of the people to bring me down and with me the right-wing camp…. Police and prosecutors have joined the left-wing media to fabricate these delusional and fabricated cases. They aim to bring down a strong Prime Minister from the right, … because I am not prepared to uproot settlements … and therefore I must be removed by any means”.

Because if you do, then you must also believe everything that this means about the entire criminal justice system. (And remember that for the last ten years, it is Netanyahu himself who was responsible for the appointment of the Justice Ministers, the Internal Security Ministers, the Police Commissioners, the Chief Prosecutors, and the Attorneys General.).

Netanyahu’s case was investigated by the elite Lahav 433 unit, which enjoys widespread international respect, not least of which the FBI. Established in 2008, the Lahav 433 unit boasts the Police’s best and most professional investigators. Its investigative standards are of the highest order. They have tackled the most complex of cases with astounding success. The success rate of prosecutions resulting from their investigations is staggering.

Throughout the Netanyahu investigations since 2016, there have been two unit commanders and about twenty investigators. If you believe Bibi, then you also believe that these investigators are all prepared to sacrifice their professionalism and their integrity and that they would risk their careers for the sole purpose of deposing Bibi, thereby committing political subterfuge. It would mean that for three years they would act against their well-honed investigative instincts to ignore glaring evidence and not only that; that they drew their conclusions before even investigating,  and they went so far as to fabricate evidence, to frame him.

And if you would believe that, that they did this with such talent and success, then by all logic it is unlikely that this was an isolated incident. How many others are framed, sitting today in Israel’s prisons, charged and convicted unjustly? If their credibility is so deeply tainted, it would mean we would have to reopen every major case they have ever worked on, perhaps, even Olmert’s.

What of the Police Commissioner, Roni Alsheich, former deputy chief of the Shabak? Whom Netanyahu himself appointed? Is it conceivable that a man who has dedicated close to forty years of his life in service of the country would join a conspiracy to undermine the political echelon and with it the country’s security? Roni Alsheich, who lives in Kiryat Arba, the city Netanyahu vowed to annex, the hub of hardcore settler fanatics, would be part of a left-wing coup to depose Bibi, to prevent the annexation of West Bank settlements and to even facilitate uprooting them? 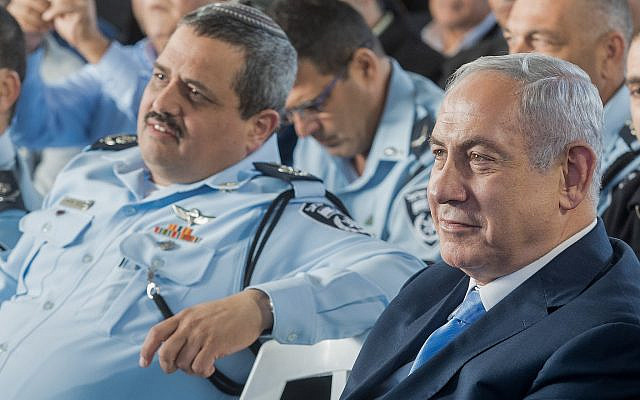 Do you believe that?

The Prosecution
If you believe Bibi, you would have to believe that all the long months the Prosecution spent reviewing the evidence, and going through everything with a fine-tooth comb was a sham. You would have to believe that the interminable delay of their announcement – including sending the case back to the police to be reinvestigated, and which precipitated weekly demonstrations outside Mandelblit’s home for more than a year, was a ploy to create a façade that they were taking the case seriously, but they already had formulated a foregone conclusion.

Shai Nitzan, the State prosecutor, doesn’t work alone. For a case so complex and sensitive, he would have appointed a team of the best lawyers at his disposal. You would have to believe that all these people with decades of experience and dedication in service to the law who hold a deep respect for it and justice, would act in bad faith. You would have to believe that so many decent, honest people who chose civil service over more lucrative options in the private sector, would risk their careers and practicing licenses, their very livelihoods – even violate their code of ethics to be part of an “orchestrated” plot to bring down the Prime Minister.

Part of the work of the Prosecution is to evaluate the evidence and decide if their case has sufficient weight to win a conviction with a high probability. And then they have to convince the Attorney General who once again reviews the case. They are very careful when it comes to public officials, and therefore they apply even stricter standards in such cases. The lesson of Ya’akov Ne’eman has been learned. They cannot afford to be frivolous. Their reputation is on the line and with it the faith of the public. That is a heavy burden to bear.

If you believe Bibi and that they fabricated the case to frame him, that there is no hard evidence of corruption, then you would have to believe that the best lawyers the Prosecution have to offer all acted with dereliction of their professional duty.

Do you believe that? 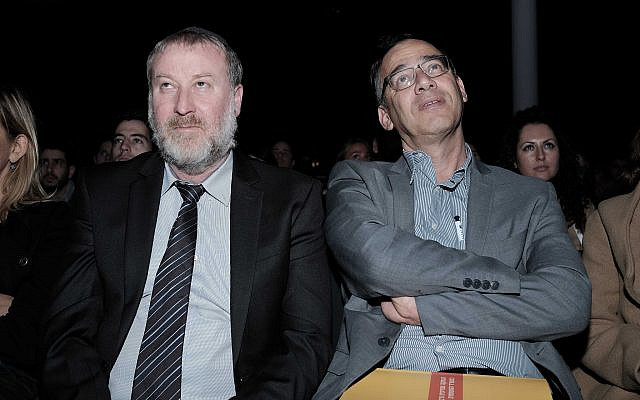 For 39 years, Mandelblit has been a committed servant of the law. He served in the IDF’s legal division for 26 years, earning the rank of General, as chief Military Advocate General. His father was a member of the Irgun and the Herut party (predecessor of the Likud). He has been a devout Orthodox Jew since he was 26. To believe that Madelblit is ideologically opposed to settlements – and that he would join a conspiracy to prevent settlements is ridiculous. He has a reputation as a meticulous legalist who prioritizes the rule of law.

He is also a longtime member of the Likud.

In 2013, Netanyahu personally appointed him to be his Cabinet Secretary. They worked so well and closely together for three years that Netanyahu then appointed him Attorney General without a cooling-off period. Such was the depth of Netanyahu’s trust in him.

If you believe Bibi, you would have to believe that Mandelblit turned his back on his life’s work to betray not only the person who was his patron and to whom he is indebted for his position, but also his highest professional standards and the mission to which he has committed his entire adult life. Do you believe that this man of principle, of unbending and meticulous service to the law, would be a participant in perverting it? Or, with 39 years’ experience, he could be so easily hoodwinked by the evidence presented him while deciding whether to indict Netanyahu?

And then there is Netanyahu himself

If you believe Bibi, you would have to believe that “the Magician” who plays 3D political chess while everyone else plays checkers, the Master of Manipulation, the Unequaled Expert of Expedience and opportunism, who knows how to cynically derive political profit from almost every possible situation – including the return of the remains of a long-lost soldier killed in the first Lebanon War – had no knowledge when he asked for shipments of cigars and champagne from Milchan, who “just happened” to profit from changing tax legislation for returning citizens, that the value of the “gifts” was just below the value required by law that he report them to the State Comptroller. And that he repeated this transaction for years until the net value reached 750,000 NIS, while unaware of what he was doing?

Or when he was also Communications Minister,  important legislation “just happened to pass”, which afforded his friend and tycoon, the controlling shareholder of Bezeq, the approval to allow him to buy shares of another company he controlled earning him a profit of almost one billion NIS– and that “by coincidence” Walla, a company owned by Bezeq, appointed a new editor, and the news agency suddenly became sympathetic in its coverage of Netanyahu and his family – and he had no knowledge of this intricate relationship?

Do you really believe that he can be both so conniving and so unwitting?

The Likud has been in power for more than 30 years over the last 40.  Police and law enforcement are known to be traditionally conservative and patriotic. What are the chances that within the Police force, especially the Commissioner’s office and Lahav 433, as well as on the Chief prosecutor’s and the Attorney General’s teams, all of them are “left-wing” with the aim of bringing down a “strong right-wing leader”? That all of them oppose the settlements, and none live in one? Do you really believe that?

When you say that you believe Bibi, you are saying you believe this too. It also means that you have no faith in these essential state institutions and that you are maligning all these dedicated civil servants.

Do you believe him now? Or are you just being politically expedient?