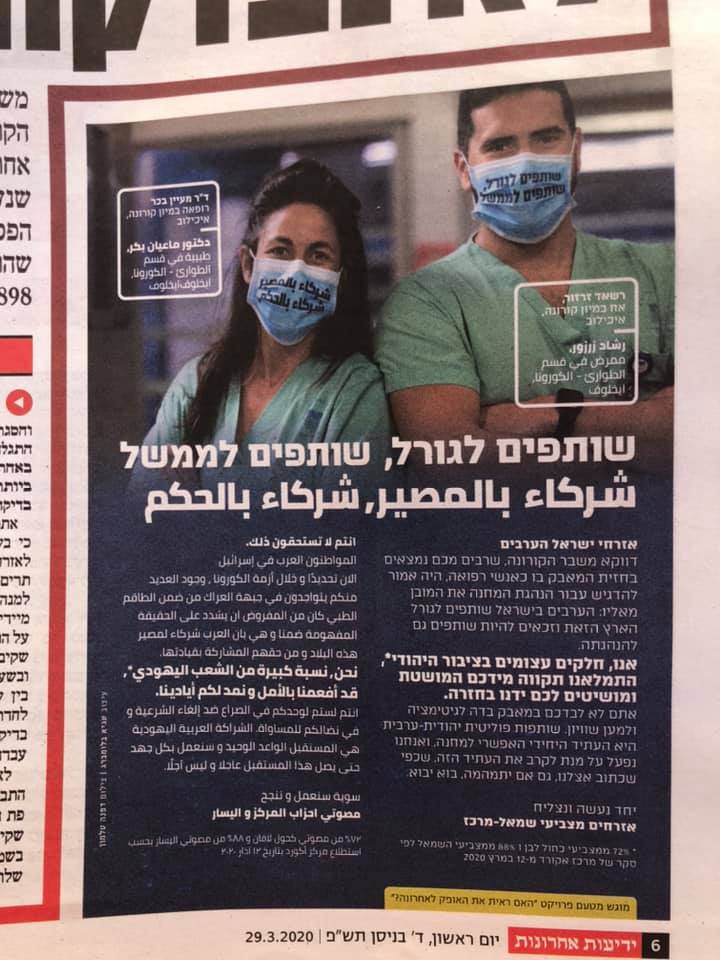 Leaders of a group of young Israeli activists think the current Corona Crisis environment is the perfect time to advance their social change agenda. Calling their organization Have You Seen the Horizon Lately their uniquely creative methods of reaching a broad Israeli audience began last year well before anyone could have conceived the current reality. Now the times have caught up with the central tenants of their message, and a wider audience is paying closer attention. 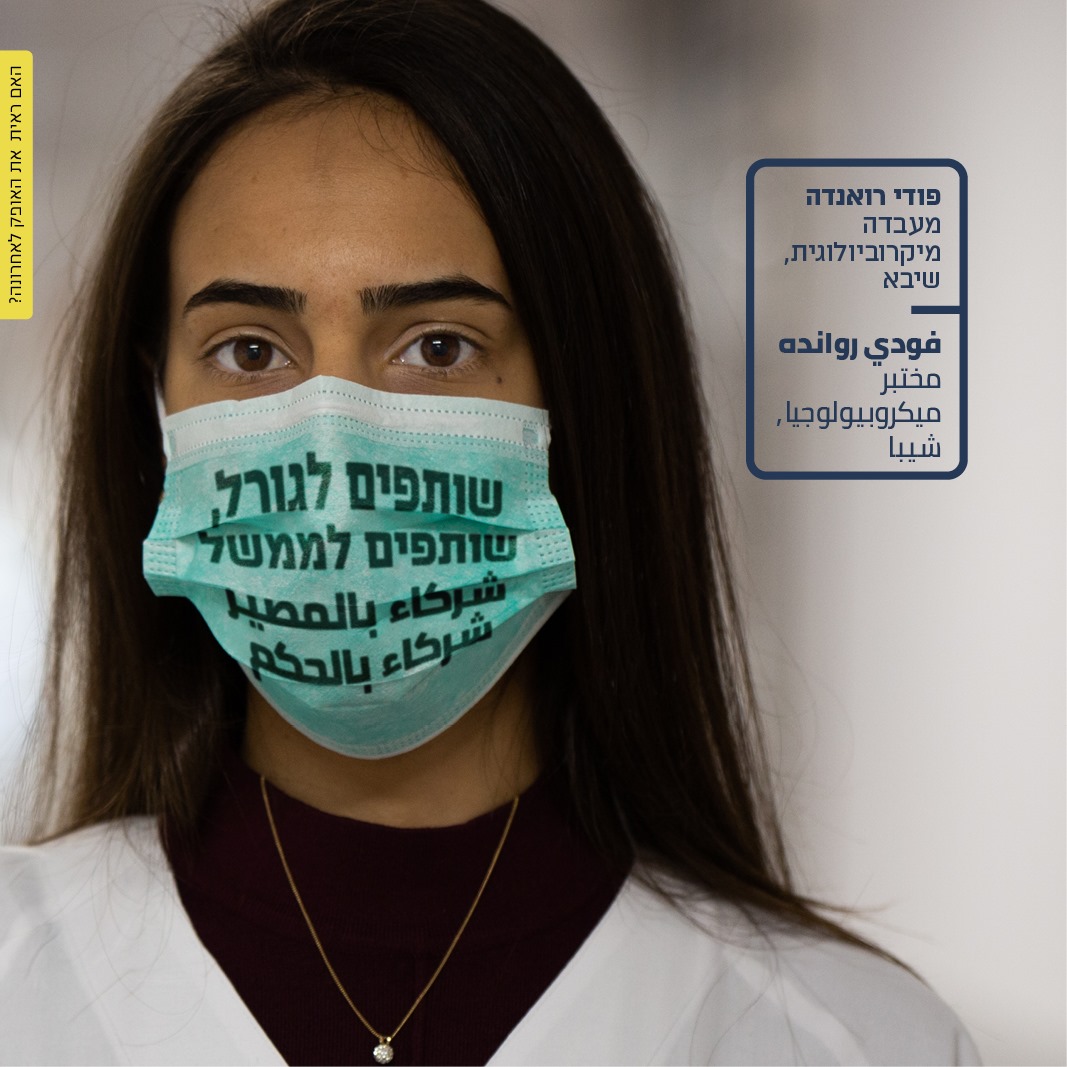 Via a new print and web advertising campaign, funded by individual donors, their point is made by recognizing the critical role Arab citizens of Israel are playing every minute of every day at the highest levels of healthcare.

As co-founder Shir Nosatzki recently explained, “We hear, ‘crisis is not the time for politics’, but remember …politics is the struggle for the priorities, resources, and our very lives. These things are crucial in normal times, but in crisis, in emergency, they become a million times more critical. Now is the best time to make the link between acceptance as healthcare providers and acceptance in other spheres including Israel’s government.”

According to Horizon co-founder Regev Contes, “the Arab citizens of Israel are an integral part of the country and therefore they should also be an integral part of the leadership. When you or your beloved family member is admitted to the hospital to receive life-saving measures battling the deadly Corona Virus, the ethnicity of the person behind the mask is irrelevant.”

Over 20% of medical doctors in Israel are Israeli Arab citizens while nearly 50% of Israel’s trained/certified pharmacists are Israeli Arabs. Many have already stepped up to have their pictures taken for the Horizon campaign in support.

The very significant participation by Arab citizens of Israel in the crucial healthcare field underlines this is also the perfect time to recognize, their contribution should also be reflected in government. And that’s a sticking point.

This group of young Israeli grassroots citizen-activists highlight the decades-long obvious failure of the political class to identify and pursue significant progress in societal acceptance and inclusion of Israel’s 2 million Arab citizens as full members of the body politic. In fact Israel’s most dominant politician of the last decade has openly exploited fear and underlying racism in his pursuit of maintaining his grip on political power. More on that in a bit.

One of the biggest under reported stories of the past 12 months is the emergence of Arab citizens of Israel as a unified voting block. For 70 years, one of Israel’s major hasbara talking points highlighted its founding democratic political structure among a sea of non-democratic middle east neighbors, by highlighting Arab citizens right to vote. For the first time, after 3 elections in less than 12 months, this right to vote has translated into a significant presence as the 3rd largest party in the incoming Israeli Knesset. And for a brief moment a serious effort to include the Joint List in a governing coalition was actually contemplated.

When it became clear however that leaders of the Blue & White political party were going to be tarnished by distorted charges that including representatives of the Joint List amounted to adding anti-Zionists and terror supporters to their coalition, top dog Benny Gantz quickly backed off. That’s what moved the Horizon activists to their new campaign.

They’ve been at this, agitating for change in Israeli society, since their organizing work as volunteer activists during the social change protest movement of 2011–12. Sparked back then by the tremendous pressure of basic cost-of-living increases (food and housing) they’ve learned the lessons of recognizing when to pick their moments and how to employ creative methods of making themselves heard.

Summing up the central drive behind their efforts, Horizon’s mission statement reads, “When stagnation takes hold and it seems that everything has been said and done and it feels pointless to try and deal with it, or even talk about it, Have You Seen the Horizon Lately offers a fresh perspective to address the Israeli-Palestinian conflict, with new and inspiring views which paint a new horizon.”

A new generation of energized and committed Israeli activists give this observer renewed hope in a better future for all citizens of Israel, and a belief they’re on the road to success.

About the Author
Ken Toltz began his professional career at AIPAC in Washington, D.C. from 1979 – 1982. He's a 3rd generation Colorado native, businessman and long-time gun violence prevention activist. After 42 years from his first visit to Israel he has relocated his home to Mitzpe Ramon in Israel's Negev.
Comments