Amidst the various violent flare-ups between the US and Iran this week, it was amazing to see the US president and Iran’s Supreme Leader directly trolling each other on Twitter. The social media platform seemingly promoted more direct dialogue between the countries’ leaders than 4 decades of traditional channels. But the Ayatollah was wrong on his 1st point here: 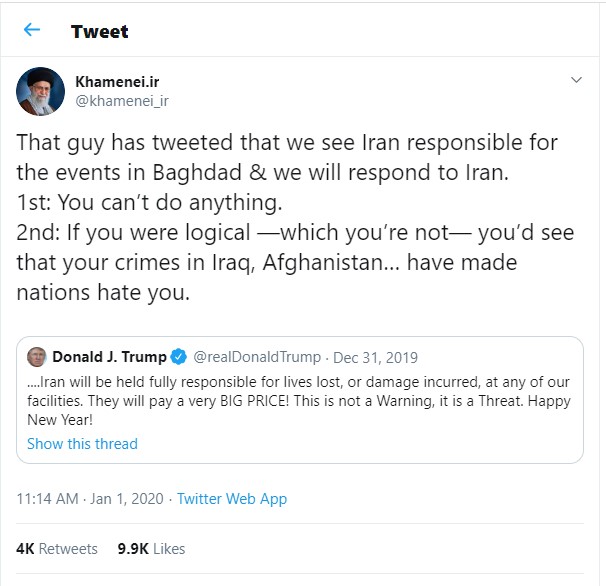 The US not only can but it appears now will take certain action to push back on Iran and protect us in this war. And it is a war. The Palestinian Islamic Jihad takes orders directly from Iran and just fired hundreds of rockets at Israeli cities in two days in November. Kataib Hezbollah, an Iraqi subsidiary of Iran, just fired over 30 Katyusha rockets at an American base, killing a US contractor. From the Ayatollah on down, the country collectively tramples the US and Israeli flags, and officials of all stripes make their position on “the great Satan and little Satan” (as we’re affectionately and collectively known there) quite clear on a regular basis. But I fear that we risk clouding this pivotal foreign policy moment with partisan hatred for the sitting US president.

Other positive foreign policy moves under this administration, mainly affecting Israel, have been hard to embrace and roundly condemned simply because it was this president that implemented them. But Obama was literally ground breaking with his use of extrajudicial targeted drone killings in many far-flung parts of the world. Now that Trump is at the helm, a large swathe of politicians and foreign policy pundits are simply too quick to issue their rebukes of all things Trumpian. And that weakens us in this critical moment. Resolve becomes hyper-important in time of war. I’ve seen that proven before my eyes in Israel in dark and challenging moments such as the Al Aqsa Intifada and Operation Protective Edge, among others. And any American who was awake on (or old enough to recall) September 11th also knows this well. But students in today’s college underclass across the US weren’t even born yet on that fateful day. And what moment since has even come close to producing that level of galvanization in America? Today’s US is sadly characterized by division.

The Pentagon knows things we don’t, and won’t likely know for some time. But the removal of such a known bad actor as Soleimani, as even the farthest left-leaners seem to agree, should engender no doubt.  His tireless work as a leader across the Middle East and beyond was not ever in our best interest. He was a dangerous enemy to the world we live in. I believe we must have some faith that our elected leaders and professional defense establishment had their reasons for finally taking him out in this tense moment. And it wasn’t about what was said on Twitter.

It is very likely the top decision makers in the dark corridors of Tehran’s opaque leadership aren’t as surprised as we are in this moment. A decision was likely made to take further escalating actions somewhere, or in multiple locations (Soleimani was taken out at Baghdad airport upon arrival from Beirut).  The US found out with top-level intelligence and took decisive action (hopefully) before he could implement his plans. He crossed a red line after all his years of virtual impunity under previous administrations.

And it isn’t just about what he was theoretically planning next. He has an enormous amount of American blood on his hands. Confirmed. Qassem Soleimani orchestrated the IED campaign that came to ultimately and brutally characterize America’s long war in Iraq. Its hard to imagine there’s a post-9/11 Iraq veteran who wasn’t, at minimum, severely traumatized by the grisly tactic. Nearly 4500 servicemen and women were killed while deployed to Iraq in the 21st century, many by Soleimani’s militias.  And staggeringly, almost 32,000 were wounded in-country; many maimed for life by the roadside bombs. This was Soleimani’s signature mark left on the conflict; sowing violence, then negotiating terms to his liking. He fought Iraq tooth and nail as a young Iranian officer in the horrific WWI-style conflict that raged relentlessly throughout the 1980s, and for more than 20 years has solely run the vaunted IRGC and Al-Quds force, who’s power over Iraq in 2019 is so starkly on display this week. He has led Iran’s revolutionary bidding globally, and orchestrated the strategies in Iraq, Syria, Lebanon, and likely well beyond.

There will be plenty of people coming out to mourn him in his parts of the world. We shouldn’t make that mistake where we live. A brazen move by Trump it certainly is. But we shouldn’t blindly condemn it just because it came from him. Both Bush The Son and Obama had their chances to take him out and opted not to. But those years are not marked by any great successes in the foreign policy sphere, and certainly not when it comes to Iran. The much celebrated, and incorrectly but popularly referred to nuclear “deal” inked by the Obama administration, was more accurately officially labeled the Joint Comprehensive Plan of Action (JCPOA) precisely because the two sides could not agree. They thus put together a lengthy document, highly praised and pushed by Tehran, to theoretically work towards an agreement. It was a naive initiative on the part of the US negotiators. Iran never agreed to end its nuclear program, but only pause it, and missile development and regional aggression has been ongoing, and quite successful. Iran has emerged as the Middle East’s most effective state-builder, albeit in their revolutionary image, swooping in on the sectarian discord inundating places like Lebanon, Iraq, and Syria, and restructuring the entire place to their liking. The legitimacy and money provided to Iran by the JCPOA did nothing to calm the Middle East… quite to the contrary. So if Trump comes in and takes a different approach, it seems that it’s about time. Especially when you have Iran’s proxies in Iraq once again killing Americans, then laying siege to the green zone and embassy, and the Ayatollah essentially tweeting that they’re untouchable…. something new has to be done.

For all the serious risk, I have come to understand that strength must be projected in the Middle East of today (and truly in all previous eras) to be effective. Anyone who’s visited knows it is an aggressive region of the world. Thus, even as someone who could be deployed to fight on any one of Israel’s fronts from one day to the next, I have applauded Israel’s aggressive deterrent policies of the last decade. Unilateral withdrawals and purely defensive measures have proven disastrous in this region. Take Israel’s 2000 retreat from Lebanon, military pullback from the West Bank in the 90s post Oslo, and the painful withdrawal from Gaza in 2005.  All led to vastly ramped-up militancy on the part of our enemies. They smelled the weakness and the lost stomach for a fight, and pounced, only encouraged to triple down on their most aggressive militant efforts. And in each case it literally exploded in our face.

The US has long needed to act more robustly in the Middle East when it comes to protecting interests and allies, and maintaining world order. Iran’s avowed revolution is determined and actively deployed to overturn that order. Soleimani was running that show. For all the faults of this administration, we shouldn’t be blinded by our partisan positions when it comes to fighting our most determined enemies. For all its dangers, the rogue state of North Korea doesn’t see itself as part of a messianic religiously driven global revolution. Iran and its proxies do not see war as a means to an end, but as a way of life. We need to stand together to face the next challenges to our way of life that are sure to come from the Islamic Republic of Iran. Because if and when the cracks appear in our facade, our enemies will be there to exploit them.