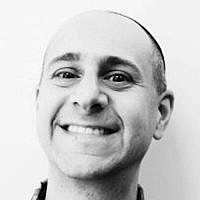 The Blogs
Seth Goren
Apply for a Blog
Please note that the posts on The Blogs are contributed by third parties. The opinions, facts and any media content in them are presented solely by the authors, and neither The Times of Israel nor its partners assume any responsibility for them. Please contact us in case of abuse. In case of abuse,
Report this post.

Happy Lag BaOmer, everyone!  And happy yahrzeit for Rabbi Shimon bar Yochai, one of biggest names connected with the holiday!

Frankly, I’d always thought that Rashbi, as his friends call(ed) him, was a bit of a self-righteous jerk.  After lambasting the Romans (Prostitution!  Self-indulgence!  Taxes!) in a Talmudic passage that tars a convert to Judaism as a traitorous stool pigeon, he declares his own wife to be untrustworthy because “women are easily impressionable” and flees with his son to hide in a cave, where the two of them pray and study Torah pretty much continuously for twelve (!) years.  (And I thought my Thursday afternoon Hebrew school sessions as a kid felt long.  Sheesh.)

When they come out and see farmers farming (as they tend to do), Rabbi Shimon despairs of how the Jewish people have given up on the “eternal life of Torah study and engage in temporal life for their own sustenance.”  (Presumably the farmers feed more than just themselves, and not all of us are so lucky as Rabbi Shimon to have a magic carob tree to sustain us, but OK.)  In his anger, he and his son laser-blast the world with their eyes (no, really, that’s what the text says) and turn the area into a flaming hellscape.

Chastised by the Divine Voice, they return to their cave for twelve months as punishment; nevertheless, Rabbi Shimon seems somewhat unrepentant when he emerges, declaring,  “My son, you and I suffice for the entire world, as the two of us are engaged in the proper study of Torah.”  Only when he sees a man welcoming Shabbat with two branches of myrtle does he accept that not everyone is cut out for the eremitic lifestyle he and his son have been practicing. Although he never explicitly accepts that there’s a legitimate way of studying Torah other than his, in Sara Wolkenfeld’s words, “seeing an example of the way physical, agricultural products can be integrated into one’s spiritual life soothes them.”

I’ll admit, I’m both jealous of Rabbi Shimon’s Cyclops-like abilities and sympathetic toward him for his life-on-the-run-from-the-law existence.  But he’s the paradigm of disconnection from the necessities of hands-on labour and a stereotype of ivory-tower-ness, failing to appreciate the ways in which working in the world enables people to earn a living and to sustain themselves and others.  So, fine, “self-righteous jerk” might be a tad strong, but so is burning up the world with your extra-cool and extra-dangerous laser vision because people aren’t taking Torah study seriously enough for you.  And that’s how this narrative has always felt.

Before March 13, my daughter and I would stop by to pick up groceries from the local supermarket on our walk home from the subway.  Now, closing in on two months of lockdown, we rarely interact with people in person and try to limit our shopping to once every two weeks.  The biweekly quantity of groceries requires taking the car, and during the ninety-second trip, the following thoughts surface:

All this in ninety seconds.  And that’s after only two months at home with the comforts of post-modern life and regular online interactions with friends and family around the world.

Yeah, I know, isolation with just my nine-year-old daughter as live-in company (in moments of COVID-induced melodrama, I sometimes imagine myself to be Prospero; if we get a pandemic puppy, we’ll name it Caliban) isn’t the equivalent of fleeing a Roman death sentence and spending twelve years hiding in a cave.  Lehavdil.  But if, after two months, my mundane and worldly obligations feel bizarre, irksome, distracting, and bewildering when I have to engage with them, it must be even more so for Rabbi S.

So Rabbi Shimon, I’m sorry.  I judged you harshly, perhaps establishing that I’m the self-righteous jerk, not you.  My bad.