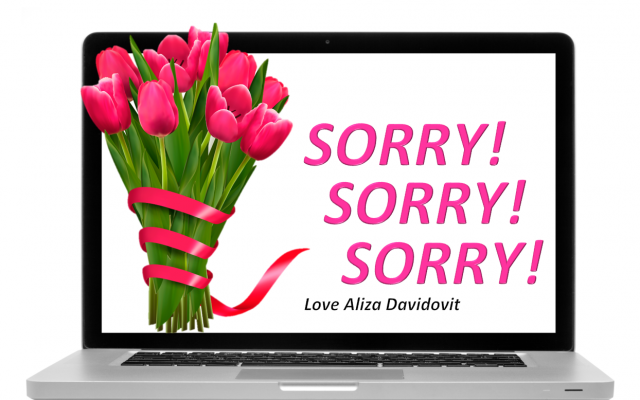 Forgive me if the mere mention of the title will inspire last song syndrome and you’ll be humming all day because of it, but with Elton John now on an international tour, his song “Sorry seems to be the hardest word” seems to be at the tip of my pen. And yet, ever ironically, an article came out this past week based on a TED Talks series “How to Be a Better Human” which postulates that we say “sorry” way too often. It reasons, according to Canadian sociologist Maja Jovanovic, that apologies “make us appear smaller and more timid than we really are, and they can undercut our confidence.” And of course in a society where everything revolves around how the “I” feels, why should one walk around feeling like a small “i” so that you can feel like a big YOU? The only problem with that way of living life is that it is Godless. In the preservation of the “I” and in our mania to foster it, everything and everyone becomes a casualty. The aforementioned sociologist even posits that apologizing for bumping into someone, is one sorry too many. However, that entire philosophy most certainly steps on God’s foot, which leads to  yesterday’s Parasha, Vayikra and many reasons to be sorry.

The sages teach that thought, speech and action are garments of the soul. We need to clean those garments when they become sullied by sin. The sacrifices provided the remedy to purify those “garments.” And let’s not keep this so sterile. The act of sacrificing involves slaughtering a living animal, cutting it into pieces and sprinkling blood, etc.; It’s gory even if it is for a holy end. But be sure that those who brought sacrifices were cognizant of one thing: that the animal before them was dying in their stead. Since it is the animal soul of man that causes him to sin, “atonement comes about only through blood” (Zevachim 26b).

But there is one thing that even sacrifices cannot do for us, and that is to say sorry to one we have wronged, hurt, lied to or stolen from. Until we make good, God won’t forgive us. For the wise among us know that nothing really belongs to us. Everything belongs to God, and so when you wrong a person, steal from them, lie to them you are in essence violating God. If you feel diminished or embarrassed by extending an apology, it’s good for you; it’s part of the atonement. Even our fasting on Yom Kippur absolves only our sins toward God not those perpetrated against others. When we try and preserve the “I”, our ego makes no room for God, for goodness, for apologies or forgiveness. And luxuriating in your own imagined greatness will bring you to sin. The word for “I” in Hebrew is “ani”, spelled with the letters alep, nun and yud. When those same letters are rearranged they spell the Hebrew word “ayin,” which means nothingness. Moses was the most humble person in history because he rearranged the letters, perceived his nothingness, he knew there was no reality beyond God’s Will and in a profound unfathomable way he lived beyond the “I.”  That made him the worthy recipient and teacher of God’s Torah. Interestingly, the Hebrew word for poor (ani) has the same pronunciation as the Hebrew word for “I”–ani. Homonyms are no mere coincidence in God’s holy language. For certain the person who lives only for himself and feeds the “I”  as if he’s catering a banquet, no matter how “rich” he may become, is nonetheless, very poor indeed.

In this generation of selfies and excessive self-love, the challenge for us all is ever harder. We question why we should do anything for anyone, even our own people. Unfortunately, the third Temple has yet to be rebuilt and we can’t throw some poor sheep on the fire to atone for us. But saying sorry to God, to our neighbors and to ourselves is still possible through prayer, charity and repentance. We have to suffocate our egos and give breath to a new and more meaningful life.  If God loved Moses for being the most humble man on earth then we can deduce, even though we are no Sherlock Holmes, that God must hate the arrogant and prideful. And indeed it is written in the Talmud that where the arrogant reside, God cannot dwell. So don’t be too cool to wear a kippa and to ask for a kosher meal; don’t be too haughty to say I think I will stop working on Shabbat; don’t be too cosmopolitan to say I am a Jew and I love Israel.  To be a Jew means to make sacrifices and take risks in our lives for God, for our Homeland, for our people and for all humanity. It is a noble task and a worthy banner to carry. So many groups from gay rights activists, to Black Lives Matter, to neo-Nazis proudly wave their flags, but Jews who have a Divine calling act as if they are embarrassed to be Jews. Take advice from Moses, try being humble with other things, but be proud to serve God and keep His Torah and Commandments. Be the bright light among the nations that you were destined to be, not a dim watt.

Forget about all those self-help books and Ted Talks promising to make you the best YOU; God’s book will make you the best JEW. In that destined role you will truly find who you are and your talents and your purpose will rise to the top and anoint you like the oil used to anoint kings and high priests. “Just as physical light influences plants to grow, spiritual and intellectual light [Torah] prods man to achieve his potential.” (Rabbi Michael L. Munk). So, yes, be sorry. Be very very sorry if tomorrow you are not a better person and better Jew than you were today. And if you think saying sorry to God or to man makes you “small”, then I’m sorry to tell you, you weren’t all that much to begin with.