I tend to be too curious and ask too many questions. Sometimes I get in trouble, but most of the time, I learn something new. On this occasion, I took the leap to email the Palestinian ambassador in Peru, he took the challenge to meet with me, a super unknown girl that likes to, you know, ask questions. Here are a few points of our meeting.

“We, the Palestinian Authority, do not agree with the politic/tactics of Hamas, we are not okay with it, but we do agree with their right to fight against Israel, we do”, says the ambassador while we have an educational exchange of ideas about how to define terrorism.

He thinks that all the actions taken by the Israeli government against the Palestinian population are defined as state terrorism, while the different activities orchestrated by Hamas are only a defence mechanism against occupation and oppression.

“Any state under occupation has the right to fight will all possible means against the occupant, the territory of Gaza, according to the UN, is still under Israeli occupation because they keep controlling everything, even food” claims the ambassador, the source for this seems to be Chapter 8, Article 51 of the UN Charter – go ahead, read it and interprete it as you wish. 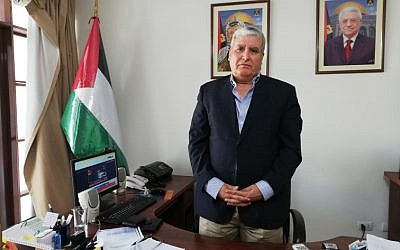 Is peace a possibility?

The 2 States theory has been a thing for a long time, but as any agreement, the terms and conditions can be hard to achieve. Walid says that the PA is ready to sign peace for only 22% of where they are now, they only want for Israel to stop controlling them.

According to the 181 UN Resolution, 55% of the territory was for the Jews, 44% for the Palestinians and 1% (Jerusalem) under international authority. Palestine claims they will be happy with only half the UN gave them. Quite interesting, right?

We also spoke about elections and if women can feel safe in the Palestine territory. If you would like to read a bit more, you just need to click here.

About the Author
Ana is a curious girl that after exploring Israel and pursuing an MA in TAU during 2017/18, also found her life partner in a museum in Jerusalem. In the middle of a pandemia, and a world crisis, she married her Jerusalemite lion and moved to Israel for good. She writes about her experiences as a wife, as a foreigner in the Holy Land and as a woman exploring life.
Comments