On Friday, February 27, 2015, Leonard Nimoy, known to most of us as Mr. Spock from Star Trek, passed away. Nimoy, as Spock, was beloved.

He captured our imagination. He was a symbolic pioneer. After all, he was the first alien to work alongside humans – on board the starship USS Enterprise.

Can we connect to an experience that extends beyond the human one? Can we, in so doing, be made to feel humble? For knowing we are not alone would render us humbled by the knowledge that we are not the centre of the universe.

Gene Roddenberry, creator of Star Trek, tapped into these questions when he created the character of Mr. Spock. And Leonard Nimoy brought this character to life – and added so very much.

Many Jews know the story of the Vulcan greeting, Spock’s famous hand gesture accompanied by the phrase, “Live long and prosper.” Leonard Nimoy appropriated the gesture from the traditional Jewish priestly blessing which he witnessed in synagogue as a young boy.

During the synagogue service, the kohanim, descendants of the Temple priests, shroud themselves in the prayer shawl and bless the congregation. Members of the community are not permitted to look at them – because they don’t represent themselves but the presence of God. A young Leonard Nimoy, naturally being curious, peeked. He saw the kohanim making a two-handed gesture and was fascinated by it. Years later, he used it – as a one-handed gesture – as the Vulcan gesture of greeting on Star Trek.

The decision to do so is more than Jewish trivia. It’s highly significant.

In Judaism, the symbol is accompanied by the three-part priestly blessing:

A Message to Humanity

When we wonder if something else is out there besides the human race, we wonder what the nature of the entity or entities is. Is it threatening? Is it friendly? When Leonard Nimoy elected to use this as a symbol of alien greeting, he was transmitting a message of peace. Beyond that, he was blessing us – blessing humanity. In this simple gesture, Nimoy was invoking the Biblical blessing and imparting to humanity not just a message of peace, but a message of comfort and spirituality.

This is what Leonard Nimoy, the actor, brought to Gene Roddenberry’s character. He added another dimension that was not in the script. He elevated the character.

The Vulcan greeting / priestly hand gesture resonates within us, particularly as Jews, because of its deep message:

Fellow humans, members of the family of Adam and Eve, we are not alone. And what’s out there is not to be feared. For when you see this symbol, know that you are indeed blessed.

Thank you, Leonard Nimoy. You have inspired us to seek the heavens, not to fear it, to seek long life and to prosper. 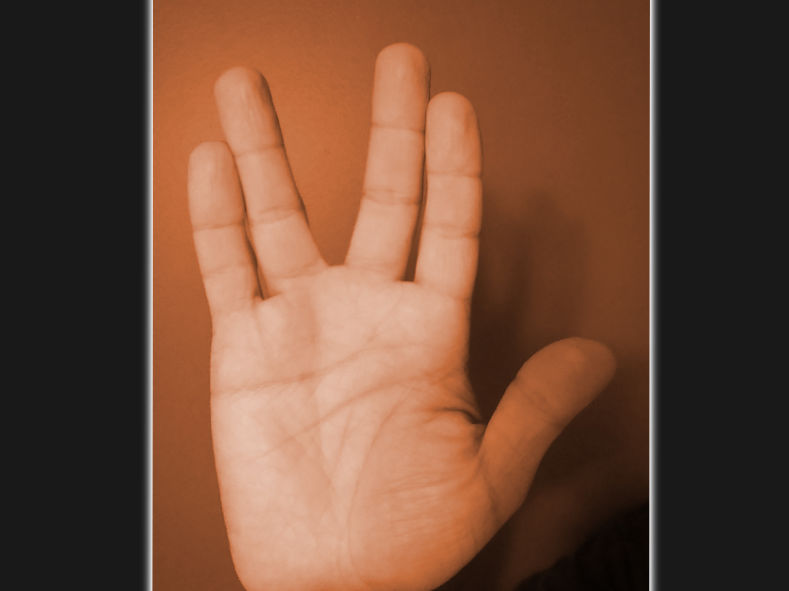