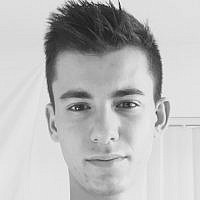 The Blogs
Zach Nelson
Apply for a Blog
Advertisement
Please note that the posts on The Blogs are contributed by third parties. The opinions, facts and any media content in them are presented solely by the authors, and neither The Times of Israel nor its partners assume any responsibility for them. Please contact us in case of abuse. In case of abuse,
Report this post.

Let’s get one thing clear: the Boycott, Divestment, and Sanctions (BDS) movement is not a peace movement. It is not a movement that aims to support two states for two peoples, or seeks to build bridges and enable both Israelis and Palestinians to national self-determination. In their own words even, BDS is a set of tactics created to punish and tear down Israel.

If you don’t believe me, just read the movement’s very own public guidelines: “Events, Projects or publications that are designed explicitly to bring together Palestinians/Arabs and Israelis so they can present their respective narratives or perspectives, or to work to-ward reconciliation … are morally reprehensible forms of normalization that ought to be boycotted.”

Now, this dangerous campaign is seeking to infiltrate the UC graduate system. On December 4, University of California graduate students will vote on a divisive and harmful resolution supporting BDS that is being supported by leadership of a union representing 13,000 UC student workers.  If passed, this resolution will limit academic freedom and create an environment that is hostile for thousands of students at UCs across the state. This will not only affect graduate students, but also undergraduates as well. In a statement about BDS on the UAW 2865 website, it states:

“We have a responsibility as educators to both learn about and teach the social issues of our time, including pressing global struggles such as the struggle of the Palestinian people for liberation from settler-colonialism and apartheid.”

This statement, in effect, encourages graduate students to use their teaching position as platforms to push their individual political beliefs onto students. Aside from the personal ethical dimensions this poses, it also would violate the faculty code of conduct. According to the UC Regents, the University should remain “aloof from politics and never function as an instrument for the advance of partisan interest. Misuse of the classroom by, for example, allowing it to be used for political indoctrination… constitutes misuse of the University as an institution.”

As an undergraduate student, I am very worried about how this will affect the environment in our classrooms. Our campus is already divided on the Israeli-Palestinian conflict, and the statements being said about Israel, Zionism and its supporters are often highly charged and offensive. As we’ve seen from past debates at UC student government bodies, when BDS is promoted, students are inexplicably encouraged to hate one another, which only serves to alienate peace rather than encourage it. If passed, this resolution could potentially take that to the next level, with teaching assistants using their position to advocate for their personal political positions.

Furthermore, union leaders have not taken a democratic or transparent approach in their advocacy for the BDS movement. They have quietly endorsed BDS activities and presented only pro-BDS perspectives to members while suppressing alternative perspectives.

At an event sponsored by the “UAW 2865 BDS caucus” (see video linked above) at UC Berkeley on November 12, panel speaker Lara Kiswani told the audience “Bringing down Israel really will benefit everyone in the world, and everyone in society.” As for those who don’t share this belief, she later added, “As long as you continue to be on that side, I’m going to continue to hate you.”

Is this the kind of environment we want on our campus? No, it is not, and why it is imperative that UC grad students vote no on BDS Dec. 4.

About the Author
Zach Nelson is a second-year undergraduate student studying biomedical engineering at the University of California, Davis.
Comments