My son Sam and I spent several days in Berlin this September, visiting the Jewish Museum, the Topographie des Terrors and the main Jewish cemetery. All had meaning but none of them held the electric anticipation we felt as we rode the S-Bahn to Wannsee in the southwest corner of Berlin. From there we took a bus to a landmark that inspired Steven Spielberg’s 2015 movie “Bridge of Spies:” the Glieneke Bridge. 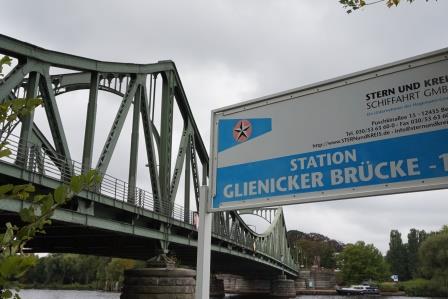 Spanning the Havel River to connect West Berlin and East Germany’s Potsdam, the bridge was the site of spy exchanges from the 1960s to the 1980s. Spielberg’s Bridge of Spies detailed the swap of Rudolf Abel for U.S. spy pilot Francis Gary Powers in 1962. That alone is a compelling historical event, albeit not a Jewish one (although the British-born Abel did speak Yiddish). The Jewish angle on the Glieneke Bridge — the one resonating with themes of defiance, faith and liberation — emerged in 1986. That’s when Soviet dissident Anatoly Shcharansky (now Natan Sharansky, and I’ll use his name’s revised spelling) left behind his KGB tormentors and walked to the West. He turned his back on the Soviet House of Bondage for freedom and life in Israel. 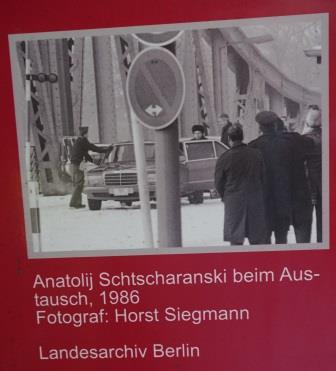 I had followed Sharansky’s case since he came to prominence in the 1970s. In my Soncino Chumash, I carry a clipping from the New York Times of July 15, 1978, with Sharansky’s closing statement at his trial in Moscow. He said,

In March and April, during interrogation, the chief investigators warned me that in the position I have taken during investigation, and held to here in court, I would be threatened with execution by firing squad, or at least 15 years. If I would agree to cooperate with the investigation for the purpose of destroying the Jewish emigration movement, they promised me early freedom and a quick reunion with my wife.

Five years ago, I submitted my application for exit to Israel. Now I’m further than ever from my dream. It would seem to be cause for regret. But it is absolutely otherwise. I am happy. I am happy that I have lived honestly, in peace with my conscience. I never compromised my soul, even under the threat of death.

I am happy that I helped people. I am proud that I knew and worked with such honest, brave and courageous people as Sakharov, Orlov, Ginzburg, who are carrying on the traditions of the Russian intelligentsia. I am fortunate to have been witness to the process of the liberation of Jews of the U.S.S.R.

I hope that the absurd accusations against me and the entire Jewish emigration movement will not hinder the liberation of my people. My near ones and friends know how I wanted to exchange activity in the emigration movement for a life with my wife, Avital, in Israel.

Now I turn to you, the court, who were required to confirm a predetermined sentence: to you I have nothing to say.

The Soviets locked Sharansky in the gulag for eight years. During that time, I attended rallies supporting Soviet Jewry in New York and Washington, DC, and I rejoiced when, on a cold day in February 1986, he strolled across the Glieneke Bridge as part of a spy exchange. His daughter Rachel Sharansky Danziger wrote eloquently about the 30th anniversary of his release and the meaning of the bridge. 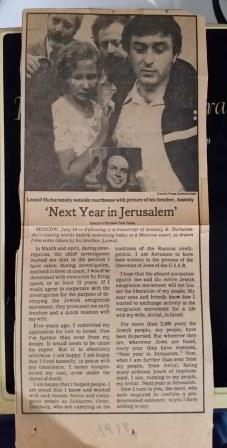 Standing on the bridge, still marked by slightly different paint colors separating the eastern and western parts, I thought about what it means in Jewish history. Can any other event so elegantly match physical setting with symbolic meaning? Had the Soviets handed over Sharansky in, say, an embassy or a lawyer’s office, the act would have been just as momentous, but the location would have had less power. Pilgrims would not be able to trek there and walk on the very spot where Sharansky passed over. Quite without intent, the Soviets released their unyielding prisoner at the one place where his freedom would be visible to the world, as an inspiration for generations.

Try as I might, I can think of no equivalent place in Jewish history or geography. It’s not like Masada; nobody died in a great battle there. Glieneke Bridge is not a Holocaust site like the Vel’ d’Hiv in Paris or the Umschlagplatz in Warsaw, or a camp. In fact, the bridge stands for something completely positive and wonderful, unshadowed by mayhem or tragedy.

And it’s not the grave of a revered rabbi, like that of Nachman of Breslov in Uman, Ukraine or the Ohel of the Lubavitcher Rebbe in Cambria Heights, Queens, although Jews certainly visit those sites to find spiritual meaning. The symbolism echoes that of the Exodus and the path through the Red Sea, except the Glieneke Bridge is a lot easier to locate and reach

Finally, I gave up on the search for analogies and decided that the Glieneke Bridge has a unique place in Jewish history and geography. Short and workaday though the bridge may be, it vibrates with profound historical and spiritual meaning. It speaks to the tenacity of one Jew to stay true to his faith and people, and the matching determination of Jews worldwide to support that man and the Jews held captive in the USSR. Can any current cause unite us in this manner?

The span where Sharansky walked stands on its own. It merits a line on every globetrotting Jew’s list of places to experience. You might even have a response similar to mine as I walked across the Glieneke Bridge:

“This is the place.” 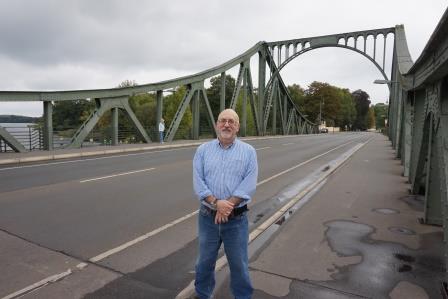 About the Author
Van "Ze'ev" Wallach is a writer in Westchester County, NY. A native of Mission, Texas, he holds an economics degree from Princeton University. His work as a journalist appeared in Advertising Age, the New York Post, Venture, The Journal of Commerce, Newsday, Video Store, the Hollywood Reporter, and the Jewish Daily Forward. A language buff, Van has studied Spanish, Portuguese, Russian, Yiddish and Hebrew, although he can’t speak any of them. He is the author of "A Kosher Dating Odyssey." He is a budding performer at open-mic events.
Comments