As I approach the house, I see him, wearing a cap that bears the name of the WWII destroyer on which he served, sitting on an outdoor chair on the veranda in front of my sister’s home. It is a nice day and the mix of sun and shade added to the comfortable surroundings and the chat about the man’s 90 years on this earth.

Irwin Shapiro, in town for the Passover holiday, hair thinned but with still a good amount there, gray-goateed, on a 5’ 4” trim frame, was born on March 26, 1927.

“It was a big year with three big events. Babe Ruth hit 60 home runs, Lindbergh flew the Atlantic, and I was born.”

Since I have known him from when his son married my sister in 1984, Irwin really hasn’t changed all that much. And truthfully, as he has aged to this point, I have never considered him an old man. Not just because I have gotten older as well, or he looks pretty good for his age – which he does, but because Irwin has a great demeanor and is still quite humorous and sharp. He fits in, even today, if you know what I mean.

Irwin was born in the Bedford–Stuyvesant neighborhood of Brooklyn, NY to Murray and Lee Shapiro and later he and his family moved to neighboring Crown Heights. He had a younger sister, Dodie (who passed away last year). Irwin went to Boys High School and studied one and a half years at the City College of New York – schooling was different back then. The family was not observant, but religious or not, Jews did feel the sting of anti-Semitism as Irwin did as he was growing up.

“I had my movie money stolen sometimes but I never got beat up. I always talked my way out of it.”

The family was sitting Shiva because of the passing of Irwin’s grandmother when the Japanese attacked the US naval base at Pearl Harbor. Irwin was 14 at the time and did not fully understand the ramifications.

Murray Shapiro had a clothing business, Dandy Tailors, near the Brooklyn Navy Yard and one day in 1942, an Italian tailor convinced Murray to hire him and make naval uniforms. Sure, the enlisted received uniforms upon induction, but the outfits were not of the best quality. Murray made uniforms with thicker materials and a velvet lining embossed with a dragon insignia.

There was a magazine called Our Navy at the time. It was the perfect media venue to promote the uniform business, but the magazine did not run any ads. So Murray sent a case of Scotch to the editor and Dandy Tailors was allowed to place an ad. Naval personnel were able to write their measurements on a form within the ad, send it to the shop, and within weeks receive their uniform. The uniforms were sold for $40 to $50 and Murray did pretty well.

When Irwin was 17, with the war still on, he thought his dad’s connection to the Navy might get him on a path to becoming an officer in the Merchant Marines, so he tried to join. You could enlist at 17, but unless there was a deferment, you would be drafted and could very possibly end up in the Army. Irwin failed his physical because he wore glasses. On his 18th birthday in March of 1945, Irwin signed up for the draft, and in May, he got called up. On May 8, VE Day (Victory in Europe Day – when Germany’s unconditional surrender was formerly accepted by the Allies), Irwin was able to take a radar technician test for the Navy and he passed. He was sent to boot camp and pre-radio school at Naval Station Great Lakes in Chicago for his basic training.

The war in the Pacific was still on, but as Irwin was training, on August 15, 1945, the Japanese surrendered (VJ Day).

“Everyone was kissin’ everyone. And I was one of the few guys able to be kissin’ girls on VE Day in Times Square and on VJ Day in Grand Park (in Chicago). Wearing a uniform didn’t hurt.”

Irwin was still in the service and needed to take more training. He wanted to go to Del Monte, CA with his buddies but ended up in Gulfport, MS. Not thrilled with his location, Irwin asked for general duty and was sent to Charleston, SC to serve on the USS Farenholt (DD-491), the flagship of Destroyer Squadron 12, after its arrival in December of 1945. The “Fighting F” had a storied war history, winning 11 battle stars for its actions in the Pacific.

“The Farenholt was full of Texans who never saw a Jew before and most of us who joined the ship then were Jews from New York. They actually expected us to have horns.”

Irwin became a deckhand chipping rust off the side of the boat. When a laundryman was discharged, Irwin took his place and with the promotion to Serviceman, 3rd Class, he did the ship’s laundry. In August of 1946, Irwin received his discharge papers. The war had already been over for a year, so of course, he saw no combat.

“They saw me coming, so they surrendered.” 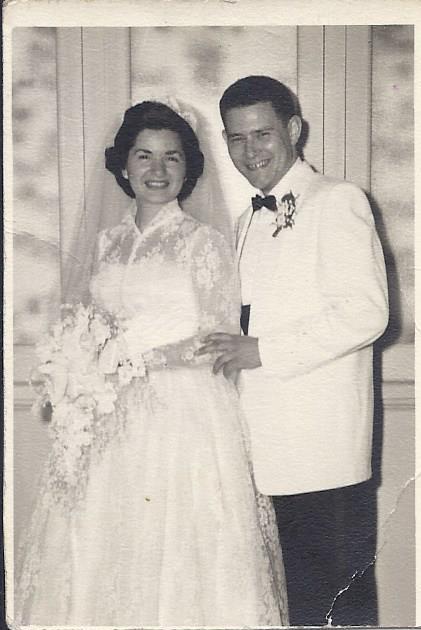 Irwin joined the Naval Reserve and also went to podiatry school. There he met Phyllis Garelik, a social worker who assisted the poor who came to the school for treatment. She also had two step-brothers in the Navy. Irwin graduated in 1952 and married Phyllis in 1953.

Phyllis had a sister and brother-in-law, Blanche and Reuben, as well as other relatives, in Phoenix, AZ and Phyllis would visit them each summer. Irwin was convinced to move there, so in 1954, he filled his ’34 hand-crank-to-start Dodge, which he bought in 1946 for $150, with his possessions, and drove from Brooklyn to Arizona.

The young podiatric physician got his license to practice and opened an office that he and Reuben had converted from a store. Irwin didn’t have that many patients, but in 1956, he moved to a medical building and started doing well. On Wednesdays, his day off, he would go to an office he opened in Sun City 25 miles northwest of Phoenix to treat elderly retirees in the area.

Dr. Shapiro never had a huge practice which was just fine with him, and on some days, he couldn’t wait for the workday to end so he could meet his friends at a local spa. In 1989, at the age of 63, he retired. Phyllis and Irwin had three children, Neal, Nina and Sheri. Sadly, after over 50 years of marriage, Phyllis passed away in 2004.

“She had four cancers. Skin, breast, kidney, then ovarian got her.”

So what’s Irwin secret for his longevity?

Irwin started smoking (his dad’s cigarette butts) at 17. And he smoked cigarettes and pipes and cigars on and off up until the age of 70. His own father started smoking at 13 and only stopped in his 90’s when he was no longer able to hold the cigarettes. Irwin has always enjoyed the occasional drink and he has eaten pretty much everything, never being too worried about a proper diet. Also, like everyone else, his life has had its ups and downs.

This nonagenarian, whose first vote was for Harry Truman in 1948, went from liberal Democrat to conservative Republican after his arrival in Arizona. Irwin prefers to stay in Scottsdale rather than move to Southern California where his children and other relatives live, because he says, it’s cleaner in Arizona, less crowded and he has good friends there. He still drives locally, but gave up the Scottsdale to Los Angeles trek three years ago.

In 1995, Irwin became a docent at Phoenix’s Desert Botanical Garden, working the exhibits. Although he can identify 50 to 60 Arizona desert plants, with his memory not being what it used to be, he now acts as a greeter once a week. Other days he goes to a casino or Happy Hour at his favorite watering hole. On holidays, he comes to Los Angeles to spend time with family.

“I can’t hear and I can’t see, but I’m still kickin’ and I still chase women, but I don’t know why.”

Irwin now uses a cane, but he can get along without it if necessary. A year ago he danced down the aisle at my nephew’s wedding. He really did.

OK, so Irwin Shapiro didn’t lead men into battle. He didn’t write a best seller. He didn’t hit a home run in a World Series. He may not have been a great man, as we in today’s celebrity society might recognize as “great,” but for nearly a century, he has been a good man, and that in and of itself, makes him a great man.

He was asked at his birthday party a few days ago what he wants to do next.

This temperate, still with a twinkle in his eye, dignified man, has enriched the lives of those he touched. I know I have always enjoyed my conversations with Irwin, and the jokes he has told me over the years. He and Phyllis raised three good kids, who had seven good kids, one of those kids due to give him his first great-grandchild in August. 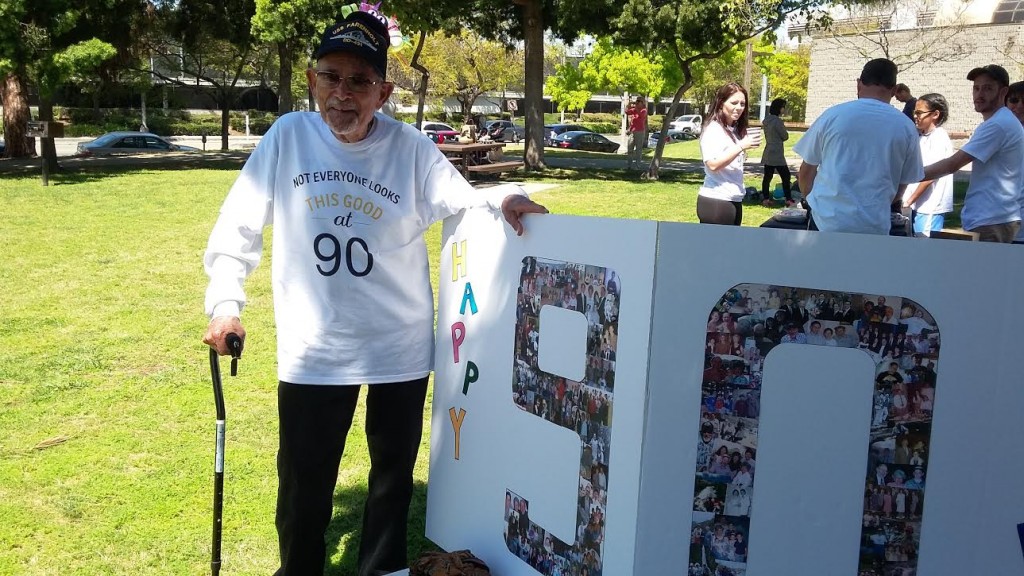