So, this time last week, I was on a four-lane freeway with about a million other cars moving slowly as one, toward downtown LA. My dad calls it the Emerald City, and if you’ve ever driven through the fog of Venice Beach, past the graffiti, past the crumbling rainbow East of Fairfax, and over the bend, there it is, enormous, and glittering in any light — Downtown. Sea-green glass and shiny chrome reflecting smoggy sky.

Beyond it, the freeway bends and stretches, shifts and tilts, uniting neighborhoods in the flow of slow and steady traffic — our ignoble constant.

LA is big. Really big. The Pacific Ocean at its lip is even bigger, still. No small waves here, oh HELL no — instead, big blue billows, crashing toward the shore, relentless, unyielding, until the moon shifts and the tide recedes over drenched sand.

(I left a dozen footprints towards the foam, knowing that when I turned around and walked back, they would be erased.)

Houses are big in LA, too — with lawns (green, even in the grip of the drought because ‪#‎priorities‬) — some have swimming pools, as blue as the sky. Others have rose gardens, and three car garages, and tennis courts. Ours had a deck — big and listing, covered in roses, geraniums and sage.

There is space for a dog or even three, behind fences, on leashes, chained to walls, they have room, still, to run, and scratch, and dig holes under fences, to stretch the limits of futility until they collapse in panting heaps, because what is the point of so much space when you can’t explore?

The sky is big in LA, too — the clouds high above, feather whips, last strands of cotton that blew into the big blue nowhere. Unreachable. God, a face too far.

And how small we are.

But it isn’t like this in Israel. It’s one of the first things I noticed, when I moved here, and when I came back after my last visit, how low the clouds hang.

“Is it because we’re closer to God?” I wondered. In this heat, it would seem we are just a few kilometers from the sun. (Or maybe we’re in Hell.)

Everything in Israel seems smaller, closer, on adrenaline, hyped and thrumming — apartment buildings leaning one on top of the other, neighbors with ears to the wall, out of interest and lack of space, small highways, narrow sidewalks, you hold your breath when you pass another car on HaTsfira Street, as though the steel all around you could suck in its stomach with you.

God is in the details, and this place is ALL detail, down to the spaces in-between tomatoes in the shuk, or the number of glass beads on a necklace, or the the measure of dust from corners cut.

And I was sure being in LA would make this difference even starker, especially in the crush of people here in the Old City — my first time back since leaving the troubled heart of the country I embrace.

It’s always crowded here, anyway, each shop a tiny universe, small and mighty, boiled down to a cup of black coffee.

And I was sure things would seem even smaller now that I’m back from the land of four lane freeways and four gas stations on one corner, and grass lawns and the mighty Pacific and infinite space between earth and sky. I thought I would be crushed by the smallness, my arms brushed by the people, pushed and shoved into corners, I would feel the grip of the city around my neck, a vice of love and loathing.

But how strange it was to walk these alleys in this oppressive heat, and realize how big they seem — as though they’ve widened, as though they’ve grown, which I know simply cannot be true since this place is made of stone. And then I look up and realize that the tarp that hung between the buildings blocking out the sky has been removed — someone took it down, and all you can see above is sky — big and endless sky straight through.

Stones don’t change, but people do. And maybe in between the sun and shadow, I’ve grown smaller. Or maybe we all have. Or maybe, really, nothing’s set in stone after all. 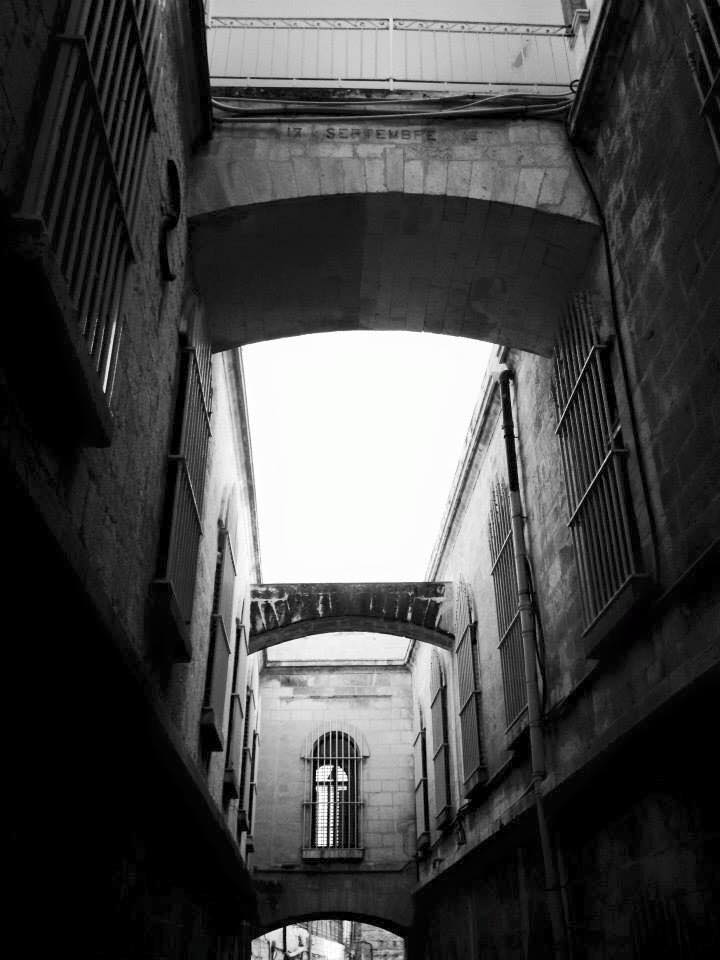