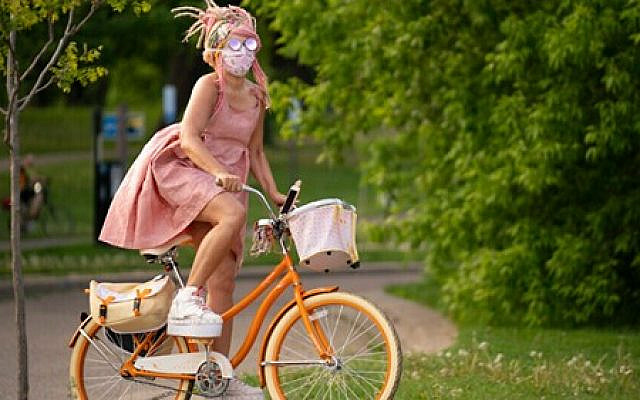 Image by Jeff Wheeler/Star Tribune via AP, shows a cyclist riding the path around Lake Harriet in Minneapolis on May 25, 2020.

You scared the crap out of me.

First of all, you have to understand—I’m 71-years old.

I’m a hand washing, mask wearing, social distancing kind of a guy who survived the 60’s.

So it ain’t that easy to scare me.

For many have tried and most have failed.

But David and Yehuda you have succeeded.

David your Q&A in the TOI where you question Professor Carmeli, a leading marvel and wizard of epidemiology in Israel, was just too damn realistic.

It hit a little too close to home.

Even the article’s title scared the bejesus out of me: ‘Under-50 have little to fear, but even vaccine won’t save millions of elderly.

The good professor went on to say, “Eighty (80) or more percent of the world’s population will get infected unless there is a vaccine that will prevent many of the people from getting the disease.”

WTF! That’s a hell of a lot of people.

“If we go to the population older than 70, the chance of dying is much higher. It’s eight percent for those over 70 [diagnosed as having the disease]. And 15 percent among those who are over 80.”

Those are some really frightening percentages for us older folks.

But something else in David’s article disturbed and frightened me.

It’s the photo he selected for his main image.

a bike dressed in beige and orange saddle bags and a white handlebar storage basket;

a girl who attaches a cell phone to her handlebars and fringes to her bicycle’s bell;

a girl with the wild dreadlocks and the even wilder flowery headband, John Lennon sunglasses, and three-inch high-heeled white sneakers.

David I get it—corona story— photo of cute girl wearing a hip mask, social distancing in a park, riding on her bike.

But there something ominous about females riding bikes that rings a bell?

And then the clapper in my head clangs, “The Wizard of Oz.”

She’s Dorothy’s neighbor who was bitten by Dorothy’s dog—Toto.

Gulch gets a court order to euthanize the terrier; puts Toto in a basket and rides off on her black bicycle.

Later in the Land of Oz, Gulch is morphed into the Wicked Witch of the West.

This witch with her black witch’s hat, hooked-nose, sharp fingernails, and stringy black hair scares the crap out of me.

I sit frozen next to our old black and white Zenith terrified every time the witch appeared on the screen.

That night in my nightmares the wicked witch ties me to handlebars of her bike.

And then it hits me like the clapper in the cool chick’s bicycle bell.

Why David subconsciously selected that photograph.

He wanted to warn us older folks walking on the edges of the yellow brick road—sans ruby slippers or a bucket of water—that there’s an army of evil monkeys willing to infect us.

David wanted to remind us on our arduous journey to the Emerald City to use our collective wisdom to stay safe, be brave and not stupid.

To watch out for witches on broomsticks, tornadoes, and evil monkeys.

David in his heart knew by scaring the crap out of us that he was saving our lives.

And telling us to chant Dorothy’s most memorable words,