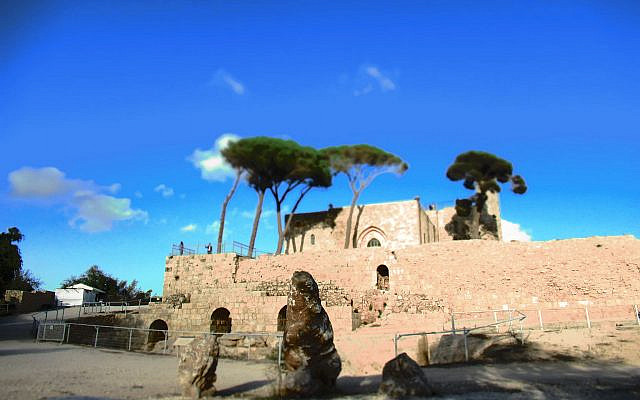 The Book of Kings refers to the seventh month of the Jewish calendar — what we colloquially call Tishrei — as the “Month of the Eitanim” (I Kings 8:2). The Talmud (Rosh Hashana 11a) explains that this is due to the fact that the patriarchs of the Jewish People, who are called Eitanim (“powerful ones”), were born in this month. This leads the Talmud elsewhere to identifying the character Eitan the Ezrachite in Psalms 89:1 with the patriarch Abraham, the “powerful” hero who stemmed the tide of polytheism (see Maharsha to Bava Basra 15a). In this essay we will examine five Hebrew words which all refer to “power”: eitan, koach, gevurah, adir, and kabir. We will see how these various words are not true synonyms, but that each word carries nuances not expressed by the others.

The Torah requires performing the Eglah Arufah ceremony at a place described as Nachal Eitan (Deut. 21:4). Rashi understands that nachal means “valley/wadi” and eitan means “strong/hard.” According to Rashi, the Torah refers to a rocky locale as the place of this ceremony. However, Maimonides (Laws of Murder 9:2) understands that nachal means “river” and eitan means “strong-flowing.” Without referencing these two sages, Rabbi Yehuda Leib Edel (1760-1828) reconciles their opposing views by explaining that eitan literally refers to the “river bank” because it appears to be holding back the waters from passing beyond its threshold. As Rabbi Edel explains it, this act of restraint takes much strength, and so eitan came to be synonymous with strength and power.

It is thus no wonder that the word eitan appears in the Torah when describing Joseph’s unshakeable righteous prowess (Gen. 49:24) and the rocky habitat of Jethro’s descendants (Num. 24:21). Like Abraham, Joseph and Jethro exhibited strong discipline and self-control in their lifelong pursuit of righteousness. Indeed, Rabbi Samson Raphael Hirsch (to Ex. 14:27) adds that eitan refers to something strong and durable that has lasted a long time — like bedrock.

In light of this understanding of the word eitan, we can better grasp its connection to the month of Tishrei. In the aforementioned discussion about the month of Tishrei, the Talmud asserts that even if the patriarchs were not born in that month, it is still called “powerful” because it is especially blessed with more timely commandments than other months. Meutzudat David (to I Kings 8:2) explains that Tishrei is called the “Month of the Eitanim” because it is an especially powerful month in that it includes so many different holidays that one can use towards self-perfection. In other words, Tishrei is the time of year that can transform a person into a firm, strongly-anchored stalwart. Just as the rock and/or hard place cannot be easily budged, likewise, the strong believer cannot be easily swayed from his devotion to G-d.

Rabbi Shlomo Pappenheim of Breslau (1740-1814) admits that he is unsure of exactly how to break down the word eitan. In Yerios Shlomo, he suggests that the root of eitan is TAV-NUN, which means “give.” This core meaning relates to eitan because eitan denotes a concentration of strength and power that can clearly only be “given” to a person as a Divine gift. No one can mistake this amount of strength as something naturally-occurring. In Cheshek Shlomo, Rabbi Pappenheim connects the word eitan to the biliteral root ALEPH-TAV, which he further reduces to the monoliteral root TAV. He explains that this root refers to “connections” and “linking.” For example, the word et serves a grammatical function in “connecting” a verb to the object of that verb, and sometimes even means “with.” Similarly, oht (“sign”), another word derived from this root, forges a semiotic “connection” between the sign and the signified. In the same way, the word eitan refers to the concentration of power as resulting from the extreme compression of multiple components “connected” together (like in the case of rocks, mentioned above).

We previously mentioned the notion that self-restraint requires much strength. This idea is famously taught in the Mishna (Avos 4:1) which asks, “Who is a gibbor (strongman)?” before answering, “He who conquers his Evil Inclination.” This classical teaching suggests that gevurah (“strength/power”) is also related to self-control, just like eitan is.

Rabbi J. B. Soloveitchik (1903-1993), in his famous essay Catharsis, echoes this sentiment when discussing the difference between gevurah and koach. He notes that in the daily morning prayers we thank G-d twice for the power He has given us: In one blessing we bless “… He who girds Israel with gevurah,” and afterwards we bless “… He who gives koach to the tired.” Rabbi Soloveitchik explains that these two blessings recall different aspects of man’s powers. The word koach in the Bible and Torah sources generally refers to “physical strength.” As such, it is not something unique or exclusive to man. Both man and beast alike possess physical strength, so both can be said to have been bestowed with koach. On the other hand, gevurah is something given exclusively to man. It denotes his ability to transcend the brute instinct of survival that he shares with the citizens of the animal kingdom.

As Rabbi Soloveitchik explains it, gevurah can be best translated as “heroism.” This counterintuitive strength gives a human being the courage to enter a situation that might not be ideal for his physical survival. Accordingly, gibbor (“warrior”) in the Hebrew language does not always refer to the “victor,” but it always refers to somebody who enters the battle and fights with all his might. Ultimately, when a person dares to continue a fight and stand up for what he believes in, he generally emerges the victor — even if he does not win the immediate battle. Rabbi Pappenheim offers a similar explication of the word gevurah, but acknowledges that the Bible also borrows this term to refer to elements of nature that do not have free will, like water (e.g., Gen. 7:18-19).

If gevurah entails holding oneself back, then G-d is the immaculate Gibbor, because He holds back His anger and gives the wicked time before punishing them (see Yoma 69b). For this reason, G-d is often described as a Gibbor (see Jer. 32:18 and the daily liturgy).

Rabbi Pappenheim offers an extensive study mapping out the relationships between different Hebrew words for “strength” or “power.” He begins by noting that koach is the most general of those terms, as it simply means the plain ability to do or withstand something. In his estimation, the word chozek denotes extra-strength koach, i.e. a non-standard “ability” by which one person might stand out above the rest for his extra dose of strength.

Rabbi Pappenheim then differentiates between qualitative strength and quantitative strength. He explains that eitan refers to inherent qualitative strength, i.e. something strong because it itself is strong (even if made up of smaller components compressed into one unit, like a rock). In contrast, kabir refers to quantitative strength, i.e. something strong because it is comprised of multiple units banded together (see Rashi to Berachos 8a who associates the word kabir with the power of communal prayer). Rabbi Pappenheim further distinguishes between two types of quantitative strength in terms of how the individual components that comprise the unit in question contribute to the unit’s overall strength. In doing so he clarifies that otzem applies when each sub-unit within the union does not necessarily contribute an equal amount of force, while kabir connotes a union comprised of equally-powerful components.

Finally, Rabbi Pappenheim explores the relationship between koach and gevurah, arguing that gevurah denotes an act by which one actualizes one’s potential koach. Gevurah is thus an excurrent show of strength. In a similarly way, Rabbi Yaakov Tzvi Mecklenburg (1785-1865) explains that koach refers to the power of maintaining/preserving a given state, a feat that necessitates withstanding the mitigating forces that try to break that status quo. Gevurah, on the other hand, is a more proactive use of koach that tries not to just withstand what opposes it, but to defeat such opposition entirely.

Alternatively, Rabbi Mecklenburg explains that koach refers to mental fortitude and concentration. With this in mind he explains why the Targum (to Deut. 8:18) translates the term koach as eitzah, which typically means “advice.” This is because, in that context, koach refers to the mental strength of being able to think through a problem and decide on a course of action. Rabbi Mecklenburg also points to the Talmudic discussions of the superlative reward for “whoever answers ‘Amen yehei shmei rabbah’ with all his koach” (Shabbos 119b). This does not refer to declaring the greatness of G-d’s name with all of one’s physical strength (i.e. screaming the words as loud as possible), but to doing so with all of one’s mental focus (see Rashi there, pace Tosafos).

This leads into our closing discussion of another synonym for “power/strength” in Hebrew: adir. Rabbi Pappenheim explains that labeling someone as chazak means that he is more powerful than somebody else, but describing somebody as adir means he is the most powerful out of a whole group. It is thus quite apropos that G-d be described as the most adir of all existence (see Ex. 15:6, Ps. 8:2; 93:4); He is indeed the strongest and most powerful entity that exists. Rabbi Pappenheim traces adir to the two-letter root DALET-REISH, which refers to “freedom of motion” without limitations or constrictions. Certainly, G-d is “free” from being subject to any other force, because He created everything and obviously overpowers them. Rabbi Edel adds that adir is related to adar/hadar (“beauty/glory”) because G-d’s “acts of strength” bring Him more honor and glory, as they demonstrate to man His omnipotence. May we too merit becoming vehicles for the furtherance of G-d’s glory.