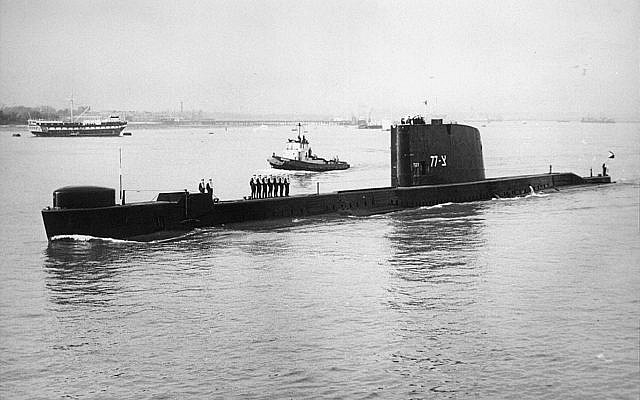 The WWII-era diesel electric submarine HMS Totem was purchased by Israel in 1965, along with other two submarines of the same class. It was modernised with new radar and sonar, cannon removed and streamlined outer hull.
Israeli crew trained in Portsmouth and after completing the training and dive trials left Portsmouth on January 9, 1968. There was no attempt to conceal the exact time of departure, even though the War of Attrition between Israel and Egypt already began.
Dakar reached Gibraltar on January 15 and left the next morning. In the Mediterranean Dakar was transiting under snorkel. The last picture was taken by the US Navy from the air in western Mediterranean. It shows what is known as “masts”, which are the periscope, snorkel and antennas, and their wake in the water.

Leaving Gibraltar Dakar continued more or less in a straight line towards Haifa, transmitting messages to the naval base there approximately once a day. The last transmission was in the early hours of January 25, 1968 when Dakar was roughly to the north of Alexandria.

Moving in a straight line under snorkel is dangerous in wartime, but the Israeli command checked that the planned path was free of Egyptian and Soviet warships. It was not specified how this was done but the most likely explanation is reconnaissance by aircraft.

This is the memorial plaque to Dakar on Mt. Herzl in Jerusalem:

Search for the cause of loss

Various explanations for the loss of Dakar were proposed, from collision with a ship to technical failure. They were unconvincing. Collision with another vessel would have been reported. Technical failure was also unlikely because the submarine was thoroughly tested and the crew well trained.

Surface ships are not the only danger to submarines

Here is one of the three Soviet Beriev-12 antisubmarine warfare (ASW) aircraft that were sent to Egypt and operated there in the years 1968-1971. These aircraft originally served with the Soviet Black Sea Fleet and were based in Crimea. The three aircraft were repainted with Egyptian markings while still in the Soviet Union and supposedly belonged to Egypt. In reality they were operated by Soviet crews.

Sensors and weapons of the Be-12

The features of Be-12, developed by the design bureau of Mikhail Beriev (Beriashvili) can be better seen in the next photo, taken in Russia:

One can see the transparent blister for the observer, which can obviously be only useful in daylight. Above it is the radome of the Periscope Detecting Radar (PDR). This downward looking radar detects the reflections of the periscope, snorkel, and the wake they create in the water. The radar can be used for detection also at night.

Once a submarine is detected, Be-12 uses its weapons to destroy it. For submarines moving fully submerged at great depth, it has guided torpedoes. But for submarines at periscope depth it is much simpler. All it takes to destroy such a submarine is to drop a depth charge, with its exploder set to the appropriate depth. The depth charge does not need to hit the submarine directly because pressure waves propagate in water with enough overpressure to crush the hull even at a distance.

Below is the photo of one of the Russian crews of Beriev-12 at the Cairo West airbase in Egypt:

And this is a Be-12 under camouflage nets in its dispersal cell at the Cairo West airbase:

The Beriev aircraft were replaced by the Soviets in 1971 by the more modern Il-38. The reason was that the main task was searching for the nuclear submarines of the US Sixth Fleet which never surfaced while on patrol. This made the features of Beriev-12 useless.

The official Egyptian version was that Egyptian navy sank Dakar in Egypt’s territorial waters and the Soviets definitely would not say anything that would contradict the Egyptian version.

After the Six Day War, the Soviets were keen to convince Syria and Egypt that their weapons were effective and Syria and Egypt could succeed against Israel with Soviet help. One of the convincing arguments was the sinking of Israeli destroyer INS Eilat by a Soviet Styx missile (Styx is its NATO designation). Massive amounts of new Soviet weapons were supplied to Egypt and Syria and often were operated by the Soviets.

Unfortunately Israeli command only worried about surface ships as threat to submarines and apparently was not aware of Soviet antisubmarine aircraft at the time of the sinking.

It is possible that Israelis did not have enough time to assess the air threat to submarines because the action against Dakar could have taken place soon after the arrival of Be-12 aircraft in Egypt. It happened only half a year after the Six Day War.

Another oversight of Israeli command was requiring the submarine to send control broadcasts. The source of the signals is found using what is called triangulation. Two separate receivers find a straight line towards the source of the signal and the transmitter is where these two straight lines intersect. Maybe they believed that triangulation could be defeated by transmitting messages in very short bursts not leaving enough time to rotate the antenna. But an electronic solution for this, which does not require to rotate the antenna, was found years before 1968.

To survive in wartime, a submarine must observe complete radio silence, and this was not done. Dakar should also have been fully submerged most of the time except for short intervals when recharging its batteries. These basic safety measures were not followed.