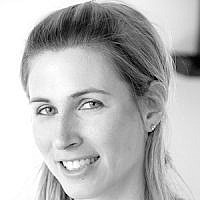 The Blogs
Rachel Cyrulnik
Apply for a Blog
Advertisement
Please note that the posts on The Blogs are contributed by third parties. The opinions, facts and any media content in them are presented solely by the authors, and neither The Times of Israel nor its partners assume any responsibility for them. Please contact us in case of abuse. In case of abuse,
Report this post.

If your elementary school child is anything like mine, the term “birthday” is somewhat of a misnomer; birthdays for the kindergarten set actually span a full season. My daughter loves birthday season — the planning, the Oriental Trading shopping and ordering, and the cake-making. One of the myriad birthday experiences your typical almost-six year-old expects is the “school party,” where the child brings in birthday snacks.

My daughter, who recently completed her six year-old birthseason, identified Gushers and Ring Pops as the refreshments of choice for her school party. As much as I wanted to help her realize this year’s Grand Birthday Vision, I had good cause to veto her snack selection.

“No dice,” I said. “I’m not feeding your classmates ten teaspoons of sugar in one sitting. How about one healthy snack and one ‘junky’ snack? “

To which she contended that doling out a healthy snack to her peers would not only be a complete dud, but it would actually be an absolutely foreign concept to her classmates. “Kids expect junk,” she said matter-of-factly.

It occurred to me that she’s right. Kids do expect junk. They expect it because that is what we give them.

I live in a Modern Orthodox community where Shabbat parties, lollypops from the candy man at shul, and soda, cake and candy at Kiddush are weekly staples in our children’s lives. Sugar is the common fare used to provide rewards and treats in school, camp and shul.

But it doesn’t stop with our kids. Dads that go to minyan before heading to work typically run out without breakfast. They go on to work long days to pay those day school tuition bills and come home after maariv to a late dinner and little time for exercise. Moms often swap sitting down to a healthy lunch at work for spending time with their kids, then eat either Wacky Mac or chicken nuggets with their kids or wait to eat with their husbands late at night — or both.

On Shabbat, the first thing the “Kiddush club” men put in their mouths is scotch — at 10 AM. Shortly thereafter, they move on to chulent, kugel and cookies at Kiddush. This is often followed by a lavish lunch shared with friends that stretches the entire afternoon and always ends with dessert. At that point, on a full stomach, it is time for the requisite afternoon “shabbos nap.”  After that, it’s shabbos party time for the kids.

This is all life on a regular basis — I haven’t even yet factored in regularly scheduled holidays that include four to six festive meals and the customs of eating fried latkes, m’shloach manot candy and baked goods, exorbitant amounts of matzah or cheese cake, depending on the time of year. Then pile on bar or bat mitzvot, charity dinners, and a constant supply of enticing new kosher restaurants — it’s not a pretty picture.

In trying to make healthy choices for my family, I am actually fighting a system. Why does our community perpetuate practices that are bad for us on a systemic level? According to the Pew Study, the Modern Orthodox community is well-educated and prides itself on its worldliness. Anyone who has picked up a newspaper or magazine and turned to an article on health understands that sugar and overeating leads to heart disease, metabolic syndrome and other obesity-related diseases.

Sadly, we don’t need newspapers and scientific studies to tell us this news. I know in my own family, our Ashkenazic genes bring with them proclivity toward high cholesterol and diabetes. And I personally know of too many of my parents’ peers who, in recent years, passed away from sudden heart attacks. Those lovable pot bellies that materialized and expanded over the years by engaging in the above-described lifestyles have led to serious health problems and even death in my parents’ generation.

But like everything in life, knowing something is entirely different than acting on that knowledge. It is hard to change the way we’ve always done things – almost impossible if you are swimming against a communal tidal wave. I have a powerful sweet tooth. Sometimes I beat it; sometimes I join it. But it would certainly be easier to beat it if I weren’t fighting it alone.

I ask our community institutions — schools and shuls — to create policies and infrastructure that actually help community members engage in healthier lifestyles. It doesn’t have to be all or nothing. Water at Kiddush instead of soda. A Shabbat afternoon walking group. Requiring one healthy snack at a school birthday party.

I personally will be asking the communal institutions with which I’m affiliated to look at their practices and see where we can do better, and I encourage you to do the same. This Rosh Hashanah, I’ll pray for a year that’s happy and healthy — but maybe a little less sweet wouldn’t be a bad thing.

About the Author
Rachel Cyrulnik serves as Partner at ALTRUICITY, a strategic development firm for nonprofits specializing in donor acquisition and retention. She draws on over a decade of experience raising funds for venerable Jewish communal institutions.
Related Topics
Related Posts
Rachel Cyrulnik
Comments