“No one is more dangerous than he who imagines himself pure in heart: for his purity, by definition, is unassailable.” ― James Baldwin

The Ten Days of Repentance, culminated by the intense experience of Yom Kippur, propel us to levels of purity and holiness beyond anything we could have done without them. And yet, history has shown time and again that with the blessings of purity, there is a great danger—the danger of turning on others. In the human quest for purity—and the intense spiritual rewards it brings—there is a tendency to turn on those we perceive as outside our circle of purity. American history provides several lessons on both the blessings—and dangers—of puritanism.

Already in the mid-1600s, puritans in the commonwealth of Massachusetts began persecuting, and even executing, Christian Quakers for their faith. Some of those came to be known as the Boston Martyrs for their place of persecution. Several decades later, the famous Salem witch trials resulted in the execution of twenty-five innocent souls in an outbreak of intolerance and a quest for purity at others’ cost.

Recognizing this danger, God tells the children of Israel, right after the holiday of Yom Kippur and Him forgiving the sin of the golden calf:

And you shall take for yourselves on the first day, the fruit of the citrus tree, date palm fronds, a branch of a braided tree, and willows of the brook, and you shall rejoice before the Lord your God for a seven day period.” 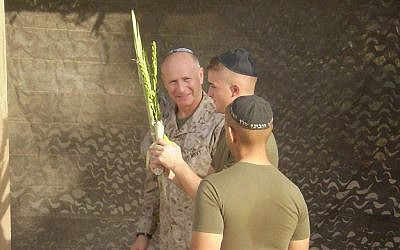 Capt. Jon Cutler shakes the lulav and etrog with Jewish soldiers on the Sukkot holiday. (TOI)

Thus, the four species represent different kinds of Jews—in a way that might remind us of the four kinds of children from the Passover Haggadah. Yet we might wonder: why bring these four different kinds of Jews? Why not bring only the Etrog, the one whom we all strive to be; the wise one with the good deeds we all see as the ideal role model? The Midrash continues:

“the Holy One, blessed be He, said, “bind them all together [into] one grouping and these will atone for those.” And if you will have done that, I will be elevated at that time. This is [the meaning of] what is written (Amos 9:6), “He Who built the upper chambers in the heavens” (indicating his elevation). And when is He elevated? When they make one grouping, as it is stated (Ibid.), “and established His grouping on the earth.” Hence Moshe warned Israel, “And you shall take for yourselves on the first day.”

These incredibly powerful words teach us the lesson of the four species: we cannot exist without each other. God does not say to take the Etrog alone, nor does He say to take the Aravah alone—God says to take them altogether. It is only when we stand united that we can stand before God.

The same verse from Amos is used to explain the power of the Ketoret—the incense brought in the Temple, which imparted a pleasant smell to the entire Beit Hamikdash and beyond. The Talmud (Keritot 6b) states:

“Rav Ḥana bar Bizna says that Rabbi Shimon Ḥasida says: Any fast that does not include the participation of some of the sinners of the Jewish people is not a fast, as the smell of galbanum is foul and yet the verse lists it with the ingredients of the incense. Abaye says that this is derived from here: “It is He Who builds His upper chambers in the heavens and has established His bundle on the earth” (Amos 9:6), i.e., when the people are united as a bundle, including their sinners, they are established upon the earth.”

Once again, we cannot stand alone before God. This is not a physical, practical, or wise political approach—it is a spiritual imperative. The rabbis, recognizing this imperative, suspended some of their rules of purity. While strict levels of purity were maintained during the time of the Beit Hamikdash, and one could not contact someone or something unless they knew it to be reliably pure, this was not the case during Sukkot. On Sukkot, the rabbis (Mishna Chagigah 3:7) established a leniency which states “Kol Yisrael Chaverim”, all of Israel are friends; in this case, meaning all of Israel can be assumed to be pure. The rabbis recognized the moral and spiritual imperative of coming together as a people and that doing so was not a spiritual compromise, but rather a noble pursuit. Joining together as a people is not a compromise of our purity but is rather the ultimate spiritual achievement—purity, and unity.

Coming high from our spiritual journey of the High Holidays, the Torah wants to make sure that our powerful pursuit of spirituality does not risk alienating others. It wants to make sure that purity does not override unity, lest we engage in some of the most dangerous patterns in history. We are told that purity must be joined with unity. We are to take the beautiful Etrog, Lulav, Hadas, and Aravah, representing the different kinds of Jews, and bring them all together. This is the most beautiful and logical conclusion Yom Kippur can have. May we be blessed with a holiday that brings us all together, uplifting us spiritually, keeping our power of purity, coupled with the gift of unity. Chag Same’ ach!