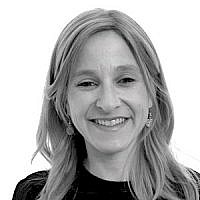 The Blogs
Sara Debbie Gutfreund
Apply for a Blog
Advertisement
Please note that the posts on The Blogs are contributed by third parties. The opinions, facts and any media content in them are presented solely by the authors, and neither The Times of Israel nor its partners assume any responsibility for them. Please contact us in case of abuse. In case of abuse,
Report this post.

Here is what we know about the terrorist attack at the Rami Levi supermarket in Mishor Adumim, Israel yesterday afternoon: At 4:15pm two Arabs entered the grocery store empty handed, walking past the security guard at the door. One of the Arabs stole a knife from the deli counter and began stabbing two of the customers. An off duty security guard shot the terrorist in the legs. The two victims were Israeli men in their fifties who were rushed to the hospital along with the terrorist. As soon as the shots echoed through the store, people dropped their groceries and ran from the scene.

Both Israelis and Palestinians shop and work in Rami Levi and the owner said: “The terrorists had attempted to destroy a place of coexistence between Israelis and Palestinians. I won’t let them succeed.” As he spoke to reporters, his employees were cleaning up the store; they washed the blood from the floor and picked up all the overturned shelves of groceries. The store re-opened two hours later. The terrorist was a sixteen-year-old from a Palestinian village near Ma’aleh Adumim who had no prior record of arrests. He was carrying out the attack with two other terrorists.

And many of us don’t know what’s it like to feel unsafe every single place we go. Waiting for a bus. Walking into a shul. Shopping for groceries. That feeling of always looking behind you and around you and in front of you, searching for potential danger. If we can’t feel safe while picking up bread and milk on a Wednesday afternoon in a suburb of Jerusalem, it seems like life itself is being constricted slowly into an undiluted, all encompassing fear. What and where is next? What can we do? What choices do we still have left when faced with this terror? Here are three choices we still can make:

1. See the Goodness. The recent, horrific acts of terrorism test our faith in humanity. How can people be so cruel, so violent, so senselessly destructive? But we know that as evil as some people are, that is how good others have the potential to be. The depth of kindness that people can reach far exceeds the evil that we see. The way we pray for each other. Care for each other. Give to each other. Like the outpouring of charity to the families who suffered from the Har Nof terrorist attack. Like the unknown, ordinary, small acts of kindness that happen each day. The smile that turns another’s day around. The car that you wave to go in front of you. The poor person that you stop to give to. There is goodness all around us and within us; it is stronger than the cruelty that we see. Goodness is a choice.

2. Cling to Hope. When we suffer, when we watch others suffer, it feels like the darkness will never end. But God brings a new dawn each day. He wants us to remember the light even when we can’t see right now. Cling to hope, have faith that tomorrow will be brighter. That things will get better. That we will be able to overcome our enemies. That we will find a way to still bring the light of Torah into the world. Hope is a choice.

3. Believe in Life. When we were living in Israel during the last intifada, well meaning relatives would tell us all the places where we shouldn’t go. Don’t go on any buses. Stay away from the shuk. And after the bombing at Sbarro’s: don’t go out to eat. But what they didn’t and couldn’t understand was that people living in Israel can’t and don’t think that way. They want to live. They are going to keep going to shul. Boarding buses. Shopping for groceries on a Wednesday afternoon. They have to. They want to live. That is why the owner of Rami Levi re-opened his store two hours after the terrorist attack. Because we are Jews, and we believe in life, above everything else. Growing and building and moving forward. We don’t know what tomorrow will bring. But here is what we do know: Life is a choice. Light is a choice. And this is the time, more than ever, when we need to choose goodness, hope, and life.

About the Author
Sara Debbie Gutfreund holds a BA in English from the University of Pennsylvania and a MA in Family Therapy from the University of North Texas. She has run parenting groups, worked in pre-marital counseling and led self-growth seminars. Sara Debbie writes regularly for both Jewish and secular publications. She resides in Connecticut with her husband and five children.
Related Topics
Related Posts
Comments