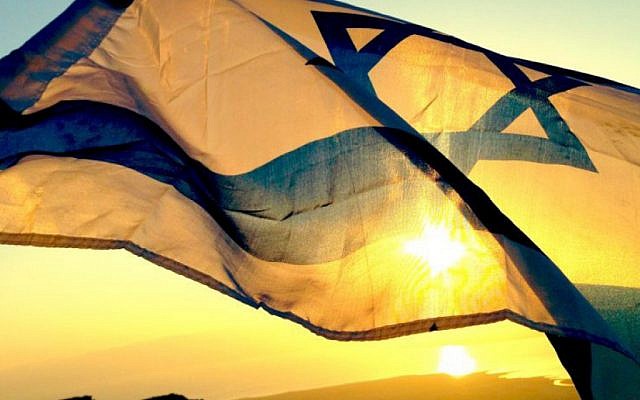 Supporting the Jewish State should be a non-negotiable item for all Americans and I am thankful that President Donald J. Trump agrees with me and millions of Americans.  If you’ve read my editorials then you know that I’m a Jewish-American who is a very strong and vocal supporter of the Jewish homeland. I’m a Zionist because simply stated, Israel must ALWAYS exist as a Jewish State because throughout the existence of the Jewish people we have been persecuted, shunned, boycotted and murdered for one reason – we are Jews.

We have looked down the barrel of extinction many times and every time, we have persevered and come back stronger than ever before. Seventy years after gaining independence, Israel, a Jewish State, with a Jewish Army, Air Force and Navy is alive to ensure that the Jewish people will never be annihilated and that we will always have a home to feel safe and secure. Simply put, Israel exists to ensure the Jewish people will never be annihilated.

Which brings me to Iran. Earlier this week, I joined a panel discussion with Michelle Makori on I24News to discuss Iran’s continued aggression towards Israel and the Jewish people – and the stark differences between the two countries.

Iran recently executed a man by hanging him to death with a industrial crane in public square. Why? Because he was a gay man. Why did they do it in public? To send a message to their people that they being gay is not acceptable, punishable by death. Meanwhile in Tel Aviv every year, Israel is the host of the largest gay pride parade and festival in the world. In Israel, women serve as tank commanders, fighter pilots and special forces soldiers. In Iran, women are banned from serving in the military. Israel leads the world in innovation while Iran is in the bottom run of rankings for virtually every single innovation category.

The Iranian regime has been threatening to murder the Jewish people and wipe Israel off the map for decades. The Iranians have tried to inch closer and closer to Israel’s borders through directly funding known terrorist groups Hamas in the Gaza Strip and Hezbollah on the Northern Border in Lebanon. Iranian-made rockets have been falling in Southern Israel for years. They have funded the construction of terror tunnels in the South and North.

Iran has not directly attacked Israel because they know that if they did, Israel and the United States would destroy the Iranian regime.

This aggression is unacceptable and enough is enough. Iran’s aggression and hatred towards the Jewish people and our homeland must come to an end.

Now you might think that I’m calling for war with Iran. I’m not. However, I would like to see a regime change inside Iran. A new regime that will recognize Israel’s right to exist and one that chooses to invest in the future of their own people instead of investing billions of dollars in their worldwide terror network designed to destroy Israel and murder Jews. A new regime that will celebrate diversity instead of publicly hanging those who don’t conform to their 1970’s mentality.

As Iran increases their rhetoric, President Trump said this during his state of the union address:

We will not avert our eyes from a regime that chants death to America and threatens genocide against the Jewish people. We must never ignore the vile poison of anti-Semitism, or those who spread its venomous creed. With one voice, we must confront this hatred anywhere and everywhere it occurs.

President Trump gets it and he has supported the Jewish people and Israel his entire life! President Trump has made it crystal clear to Iran, our allies and to the United Nations that the United States of America will stand shoulder-to-shoulder with the Jewish people and Israel. The United States Treasury department has implemented the toughest sanctions in the history of sanctions against Iran which are crippling Iran’s economy.

As the world continues to isolate Iran, they continue to go back to their Anti-Israel, Anti-America and Anti-Jewish playbook in hopes that it will rally support from Arab Nations. Their calls are falling on deaf ears and it’s not working. Their Arab neighbors are not responding. The Iranians are in desperation mode right now.

Iran’s battle cry to Arab Nations for support has failed.  I am calling on all Jewish-American to unite behind our homeland today, tomorrow and forever. The Jewish State must always exist and Jewish-Americans must double down on our financial and emotional support of our brothers and sisters in Israel. This is non-negotiable. Am Yisrael Chai.