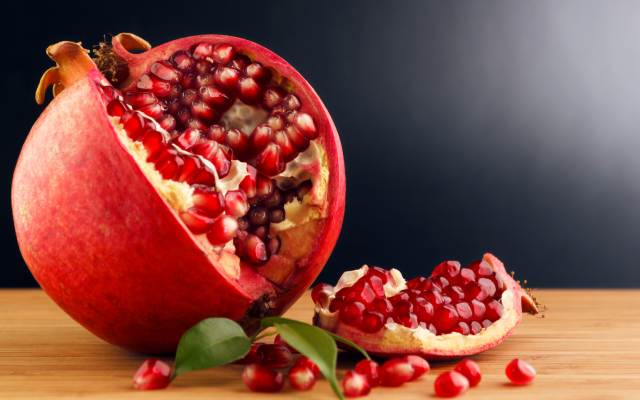 The symbols of Rosh Hashana are plentiful!

The most popular ones are pomegranates, whose many seeds symbolize abundance, and the apple dipped in honey to symbolise a sweet new year.

Generally speaking, the symbols of Rosh Hashana fall into one of two categories: either the food has a quality we are trying to replicate or the name of the food is associated with a good quality we seek. Examples of the former are the head of the sheep, symbolizing leadership, and fish, which multiply in abundance. Examples of the latter are carrots and fenugreek, whose name means “plenty,” and dates, leeks, or cabbage, whose Hebrew name means “consumed”— that is, that our enemies should be consumed. We eat gourds, beets and spinach because their Hebrew names mean “to remove” or “tear” any evil decree against us.

Though the traditions are cute and sentimental, it’s difficult, at first glance, to see the depth in our faith, beyond what seems to be just a bunch of random traditions heaped together. But in truth, within these simple foods lies a deep secret that can elevate your spirituality to new heights and uncover new depths of meaning within our traditions.

Nearly 3000 years ago, when the prophet Elisha was on his deathbed, Yoash, King of Israel, came to see him. The Arameans (inhabitants of modern-day Syria) were threatening to go to war with the Jews, and the panicked Jewish king came to the prophet for guidance.

Elisha instructed the King to shoot arrows from his bow. As he did so, the prophet declared: “An arrow of salvation for Hashem and an arrow of victory over Aram.” He then told him to collect the arrows and beat them to the ground. The King did so and hit each arrow three times. When Elisha heard that he only hit the arrows three times he was disappointed. “Had you hit them 5 or 6 times you would have wiped out Aram forever. But now that you hit them only 3 times each, you will have 3 victories over Aram but they will persevere. The prophet’s words were fulfilled to the tee: after losing three wars, Aram (Syria) remains a thorn in our side to this very day.

A similar story happened during the destruction of our first Temple in the hands of the Babylonians, 2800 years ago. The Jewish King Tzidkiyahu had been exiled to Babylon and Jerusalem was in ruins. When one of the King’s officers went to visit him in Babylon, Jeremiah the Prophet gave him a book of prophecies about Babylon and instructed him to bind it with a stone and sink it at the bottom of the Euphrates River as he simultaneously declared, “So shall Babylon sink.”

The hand of G-d was clearly at play in both of these Biblical stories. The war against Aram could easily have been won without King Yoash whacking the arrows, and it’s really difficult to attribute the fall of the mighty Babylonian empire to a sunken book in an Iraqi river! Yet these stories are told to us in Torah to reveal to us the method by which G-d chooses to express His will in our world:

Though he can do whatever He wants, G-d has chosen to allow us to be his partners in making things happen. When he makes a decree, He wants us to do “something” on this earth that will initiate the process by which the will of G-d shall manifest itself.

When someone gives you a check written out to your name, it’s really yours. But if you never take the time to deposit it, the money will never actually arrive in your account. When you arrive home at night, there is electricity within all the walls of your home already, but if you fail to flick the switch you’ll be groping in the darkness. In much the same way, G-d wants to send us his blessing, but He’s waiting for us to make a physical act that will give that blessing a place to manifest itself. This spiritual truth actually lies at the essence of prayer. If we all know that our verdict for health and success is signed on Rosh Hashana and sealed on Yom Kippur, then why would we need to pray daily for health and prosperity?

The answer is that, though the blessing is waiting for us in the wings, if we don’t verbalise our needs each day, those blessings will most likely remain abstract, like the uncashed check, and not become the healing and prosperity that we actually need. Your daily prayer serves as the bridge that allows the blessing to flow from Heaven into your home and business. It forms the exit ramp off the highway that ensures that the blessings arrive at the right address and don’t get delivered to your neighbours instead.

When King David was weak and dying, his son Adoniyahu led a rebellion to crown himself as King. David mustered the strength to order the officers to anoint his son Shlomo (Solomon) as the next King of Israel. When he did so, his Chief of Staff, Banayahu ben Yehoyada joyfully proclaimed, “Amen—so be the will of G-d!” His declaration seems puzzling, as G-d had already announced that Solomon would be the next King after David. But we can now realize that Banayahu understood that G-d’s blessing was awaiting a human action. As soon as David made the actual move to crown Solomon, Banayahu knew that G-d’s blessing was going to take effect.

At last we can understand the reason that we have physical symbols on the Rosh Hashana table. Far from being merely sentimental, these items are actually fundamental. Each one of them represents a tangible request we are making of G-d, so that His blessing can immediately take effect through our initiation.

It’s not enough to expect G-d to know what’s on your heart. You have to make the first move. It’s a law of spirituality. In order to be blessed with a sweet New Year, you have to actually dip the apple in the honey and taste the sweetness. The same goes for the other symbols. But most importantly, when your date in court arrives, show up! Rosh Hashana, beginning Monday evening, is YOUR Day of Judgement before G-d. It’s vital for you to state your case before the Judge. Verbalize what you need, and Hashem will surely grant it. Don’t just rely on the fact that He already knows (He does), because if you desire that your blessing actually come to fruition, it’s going to require verbal expression!

Pulses are read with hands not hearts, because there is nothing more important than our actions. It’s wonderful to be a good Jew in your heart, but to truly experience the heart of Yiddishkeit you have to express your faith through action. In honor of the New Year, make a resolution to do one special mitzvah this year that will be the conduit of all the blessings for which you yearn.

Wishing you a month of opening the shades to let the light in.