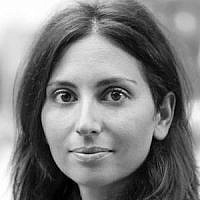 The Blogs
Nathalie Alyon
Apply for a Blog
Advertisement
Please note that the posts on The Blogs are contributed by third parties. The opinions, facts and any media content in them are presented solely by the authors, and neither The Times of Israel nor its partners assume any responsibility for them. Please contact us in case of abuse. In case of abuse,
Report this post.

When I saw the photo of Aylan Kurdi’s body laying on a shore in Bodrum, Turkey, the words of a frustrated taxi driver in Istanbul echoed in my head: “Let them die.”

It was a few weeks before Turkey’s June 7, 2015 elections and my taxi driver and I were stuck in traffic in Istanbul. I was going from Ulus, a neighborhood home to many members of the city’s Jewish community to Beşiktaş, where ferries to the Asian side depart every half hour from an old Ottoman port. Exhausted from switching between the gas and the break pedals, my driver signed repeatedly and lamented the amount of Syrians who had “invaded” the nation. He had no qualms expressing disdain toward the AKP (Justice and Development Party) government that let “these Syrians in.”

“Don’t you think their state is pitiful? It’s not like they’re coming here for fresh Bosporus air. They’re escaping civil war,” I said to the driver. We were at a standstill by touristic Ortaköy, famous for a synagugue, a church, and a mosque that stand meters from one another. Tourists, students holding baked potatoes larger than their two hands, and couples holding hands walked between the cars.

“What is it to me about their civil war?” He pressed hard on the gas to swivel through an opening among the cars. “What kind of people are they anyway, abandoning their country as they do!”

Over two million refugees entered Turkey since the civil war in Syria began. No longer huddled in border-side camps, Syrian children who speak perfect Turkish roam Istanbul’s streets and sell what they can get their hands on so they can eat. They are indistinguishable from Turkish street children doing the same.

Such a large number of migrants would affect any country’s social fabric let alone one whose political stability deteriorates each day and my sensitive driver was not alone in his frustration. According to a 2014 study on Turks’ perceptions of Syrian refugees, about 62 percent believe their presence disturb social morality and peace. While many of these respondents affiliated with the nationalist camps represented by the CHP (Republican People’s Party) and MHP (Nationalist Movement Party) they also included followers of Tayyip Erdoğan and the AKP regime.

I usually avoid getting into political discussions with taxi drivers, but I couldn’t help myself. I told him that the refugees hardly had a choice; that they would have died if they had stayed in their country. That’s when he raised both hands off the steering wheel and sentenced the victims of Syria’s war to death.

“Let them die. If they have civil war, they should stay and fight for their country. We didn’t get our country by running off when things went sour.”

“But there are women, children… surely not all can stay and fight. Should they, too, be condemned to a certain death?”

“Yes,” he turned his head toward the back seat, toward me. “They should go fight for their country. If my country were invaded I’d sacrifice my children for these lands. Who’s going to fight if everyone leaves?”

His words reminded me of a meme that was going around about a year ago, joking that the Syrian civil war would be resolved just as soon as Bashar Assad would be the only Syrian left in the country. The image of an empty Syria with Assad dancing Dabke by himself appeared in front of my eyes. I tried to hide my grin from my driver, who kept glancing at me from the rearview mirror.

I wanted to tell him that many in Syria do stay and fight against those who strive to enslave and behead. Some of them are women and others still children, like the all-female fighters of the Kurdish Women’s Protection Units (YPJ). Knowing he wouldn’t appreciate my uttering the word Kurdistan or speak positively of any movement — armed or otherwise — that involves Kurds, I remained silent for the remainder of my slow ride.

Since my conversation with that taxi driver, the results of the June 7 elections have borne chaos instead of a government in Turkey. AKP failed to secure the majority vote Tayyip Erdoğan needed to change the constitution to give himself authoritarian powers as President. He stalled the creation of a coalition government and sent the country to repeat-elections scheduled for November 1st. As he demands his citizens provide his former party 400 seats, most polls suspect that the re-do will not produce different results.

The Republic of Turks, which just months ago seemed to be on a path of reconciliation with its Kurdish minority, seems to be headed for war. Clashes with the PKK (Kurdistan Workers’ Party internationally considered a terrorist organization), fallen soldiers, and dead civilians piling up in the east are daily news as attacks against the HDP (People’s Democratic Party) have become commonplace. Running on an anti-nationalist liberal platform, HDP came out of the June 7 elections with 13% percent victory, winning the hearts of not only Kurds but also secular liberal youth. Residents of Cizre, a mainly Kurdish border town, have been under curfew for days as wounded civilians unable to leave their houses stuffed their dead in refrigerators. Clashes and attacks continue to add to a long list of events such as the July 20 massacre in Suruç.

Against a backdrop of such news, Turks can hardly find time to dwell on the Syrian refugee crisis, which has long become an ancient topic. Nevertheless, the issue only recently flooded the front pages of the Western world. Images of thousands of people pushing police forces to lift wire fences and run across the Macedonian border sparked the current debate, which climaxed with the picture of Kurdi’s lifeless body. Suddenly everyone was talking about these refugees: to let them in or not to let them in.

The Syrian refugee crisis is as old as the civil war. Owners of charter boats along the coast of Turkey’s vacation towns have been for years dealing with smugglers who rent boats under false pretenses, overfill them with desperate refugees, and at the first sight of a problem, abandon their vessels. Even though thousands — Syrian and Sudanese and Eritrean asylum-seekers — have drowned under the waves of the Mediterranean, until that sensational picture filled social media feeds, the issue was treated as a nuisance, if at all.

My taxi driver’s argument — if we were to strip it off its nationalist-fascist undertones — did touch upon a truth even if on a tangent. Focusing on whether or not the Syrian refugees should be allowed through Macedonian gates into the EU via Turkey neglects the root of the problem. The 21st-century West has been as successful ignoring genocidal wars happening outside its borders as they were in the 20th century, when it ignored those happening within its borders. The current discourse, which zooms in on the Syrians in limbo — those who managed to actually leave their blood-soaked country — is tuning out the war creating them in the first place. As Europeans debate whether or not the refugees at their doorstep will turn out to be terrorists or in ten-year’s time demand Sharia law in the streets of Berlin, millions are still facing death in Syria. Many men, women, and children are fighting for those very freedoms that Europe fears the refugees will erode.

As ethnic and political tensions rise in neighboring Turkey, the possibility of a Turkish civil war there looms large. And Turks surely won’t be able to blame that on the Syrians if this unfortunate scenario were to occur. I wonder whether my taxi driver would be so steadfast in his convictions as he arms his children and sends them to violent street corners. I wonder whether he would be so sure on which side they will fight or even understand what the sides are, as it surely will not be black and white. Well, I suppose if all else fails, one can always blame it all on Israel but I digress…

As all experts say, the refugee problem of the world is only going to compound. The current discourse over refugees, which focuses on the doors of the West and whether they ought to be open or closed, have already become anachronistic. As one of the few countries in the Levant that had managed to steer relatively clear from the bloodshed that washed Middle Eastern streets in recent years, Turkey is descending into further havoc each day.

About the Author
Nathalie Alyon is a Tel Avivian Turk who likes to write and live around the world. She is the former associate editor of the Journal of Levantine Studies published by the Van Leer Jerusalem Institute and network coordinator of the Anna Lindh Foundation for Intercultural Dialogue. A Brown University graduate, she has an MA in Middle Eastern Studies and teaches a course on Ottoman History. Her fiction and nonfiction have been published in online and print publications. She blogs about intercultural living at packthestory.com.
Related Topics
Related Posts
Nathalie Alyon
Comments