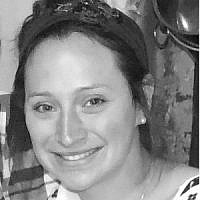 The Blogs
Nili Zivan
Apply for a Blog
Advertisement
Please note that the posts on The Blogs are contributed by third parties. The opinions, facts and any media content in them are presented solely by the authors, and neither The Times of Israel nor its partners assume any responsibility for them. Please contact us in case of abuse. In case of abuse,
Report this post.

Aviva awoke from her nap and decided to go look out from the balcony onto the beautiful Jerusalem views. Just then she could not believe her own eyes. Across the street on the sidewalk, Aviva witnessed a dispute between a husband and wife. With both their daughters in the car, the husband had grabbed his wife, pushed her up against the wall and punched her in the face so hard that she fell to the ground. As if that wasn’t enough, when the wife finally managed to stand back up, the husband continued to hit her over and over again.

Most people, when something like this happens and with so many thoughts running through their head, would freeze on the spot not knowing what to do. Not my sister in law. Immediately, Aviva started to scream down to the man, as loud as she could, pleading with the husband to stop. When that didn’t work, she came running back into the house, screaming for us to wake up and get a phone to call the police.

As I was taking my Shabbos nap, I was startled when I heard Aviva screaming for a phone to call the police. Immediately, we all got up, found a phone and called the police. Within seconds, Aviva and I ran downstairs and waited to wave down the police.

What was most frightening to me was, that when we arrived downstairs, the couple and the two daughters were no longer outside. They had gone back into their house. We could only imagine what was happening inside.

The police arrived within minutes. They stopped the husband and arrested him as he was about to drive off with his daughters. While the husband was being arrested, he managed to “thank” Aviva and me for calling the authorities on him, and reminded us that he, in his own words, was “the man of this house”.

My question is, how anyone could be a witness to such horrors, be so sure of the situation next door and not have done anything until now?! How is it, that across the street from this scene there is a central children’s park filled with families and still not a single person in that park thought of doing something?!

Every so often we hear of domestic violence situations gone incredibly bad, where the husband kills the wife and the kids, and we ask the big question, “how has nothing been done to prevent this”?

In the early 60’s there was a situation in which a young woman named Kitty Genovese was attacked on her way home in Queens, New York. The unknown assailant made several separate attacks on her over a period of about forty minutes, and she finally died of the stabs he had inflicted on her. As the police subsequently ascertained, at least thirty-eight neighbors had heard her screams for help, some may have also seen her struggle, yet no one intervened – not even to call the police. This situation on neighborly inaction had raised the subject and had been the base of many reports coming from the social science departments.

Here I ask, what is it that causes us to freeze when we witness such terrible scenes? What causes us, as human beings, to decide not to engage in any way to help a fellow human being in their time of need? I would say that the reasons are, unfortunately clear. The thought that someone else will probably do it, the feeling of not wanting to get involved and sometimes just the hope that ignoring the situation will somehow make it stop.

Jewish law speaks of being a “Good Samaritan”. The bystander’s duty to come to the rescue of his fellow man who is in peril is religious, ethical and legal. A citizen is expected to engage in the act of rescue, both personally and with his financial resources.

I have no doubt that the responsibility is on the authorities to take even the slightest situation as serious as possible, and to do all that is in their power to put away these terrible men who allow themselves to lay a finger on their spouse or child.

However, I think that in addition, the responsibility belongs to us as civilians to take action. This is the world we live in as people and it is our duty to be there at hand for those in need.

Although it is clearly not a natural trait to most people, I do believe that we as people need to do all that is in our power to fight those natural thoughts and decide we are going to be do-ers and not bystanders. It is not enough to blame it on the police for “not getting there” fast enough or wondering how has nothing been done. It is our duty to stand up and be the voice for those poor women and children that don’t always have the power to speak for themselves.

This week, on Tuesday November 25 is going to be the international day for the elimination of violence against women, in honor of this day I call upon every person to try and make the change that they can and more.

I believe that in order for our society to be a better place, we need to take a stand and do the right thing when the time comes, and the time is now.

About the Author
Nili Zivan is 22 years old, living in Hashmonaim and married to a soldier in the IDF. She was a commander in the army for soldiers with a criminal background. Today she is studying social work.
Comments