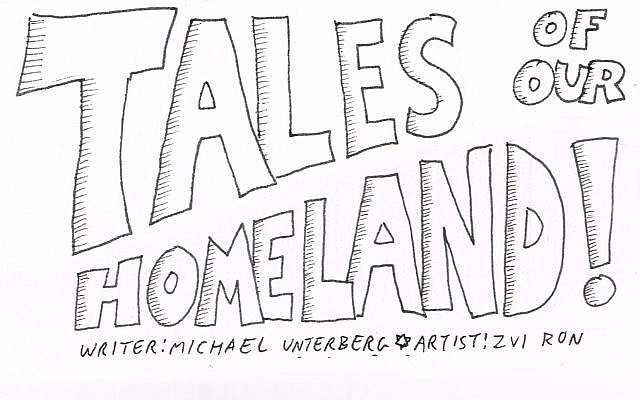 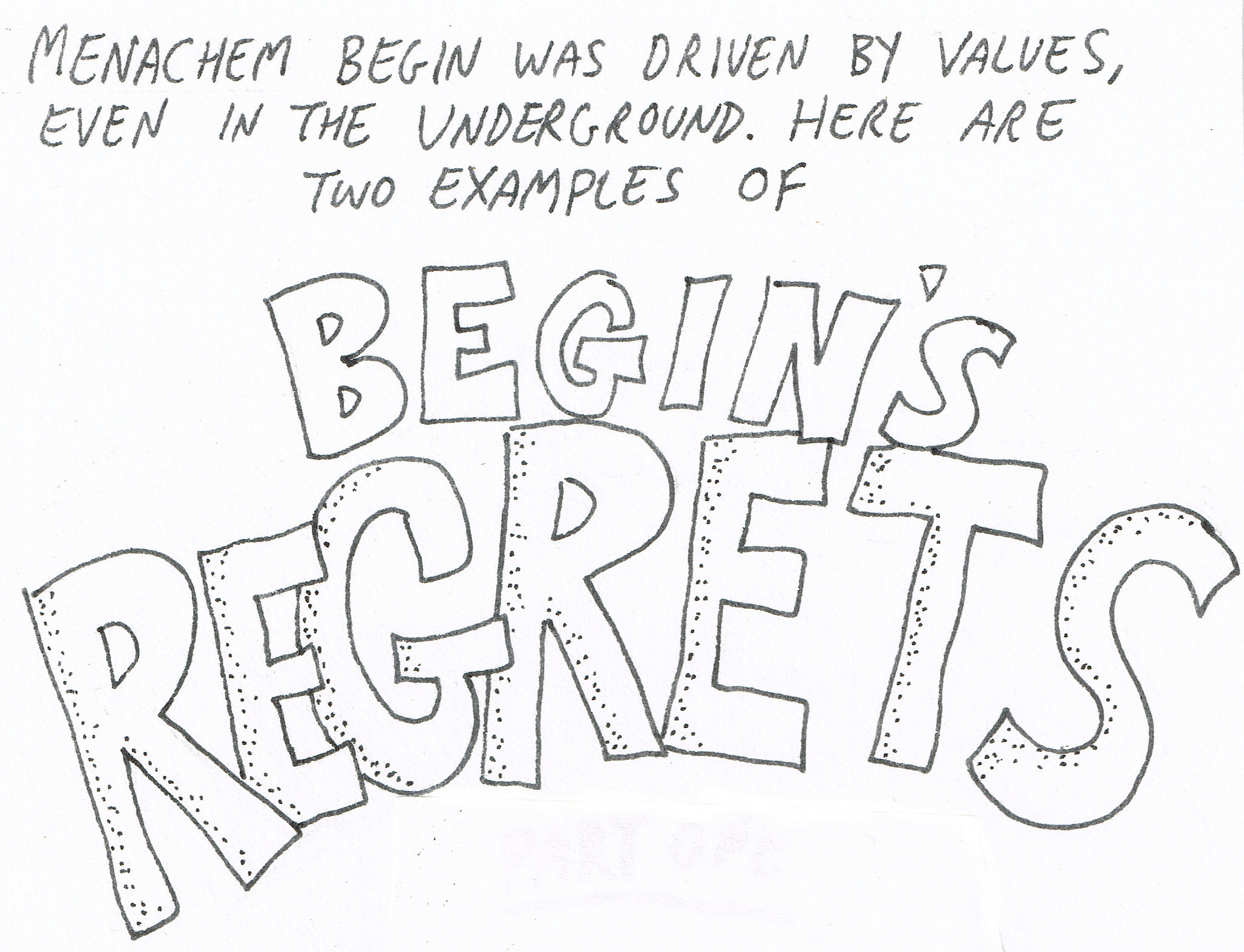 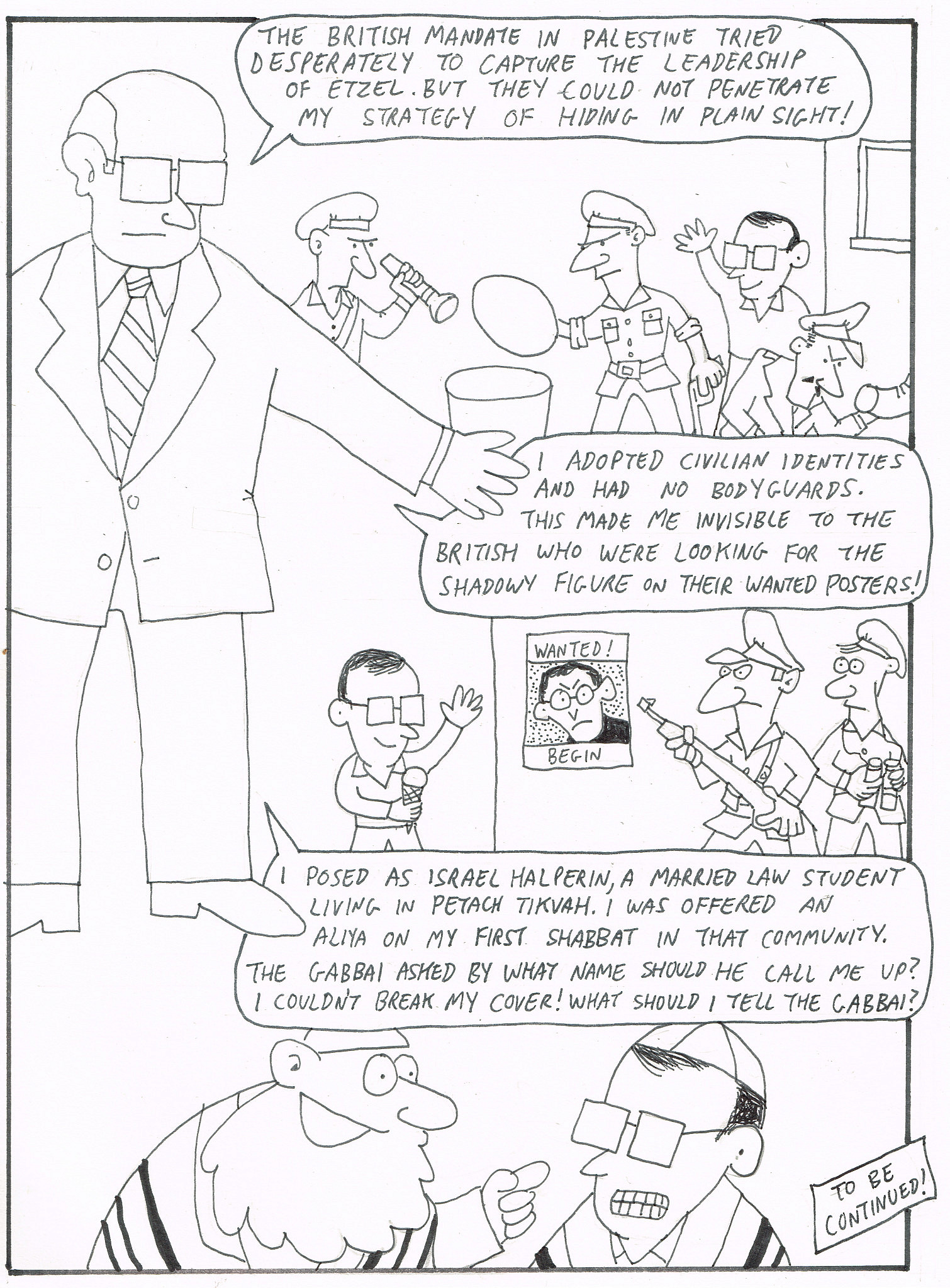 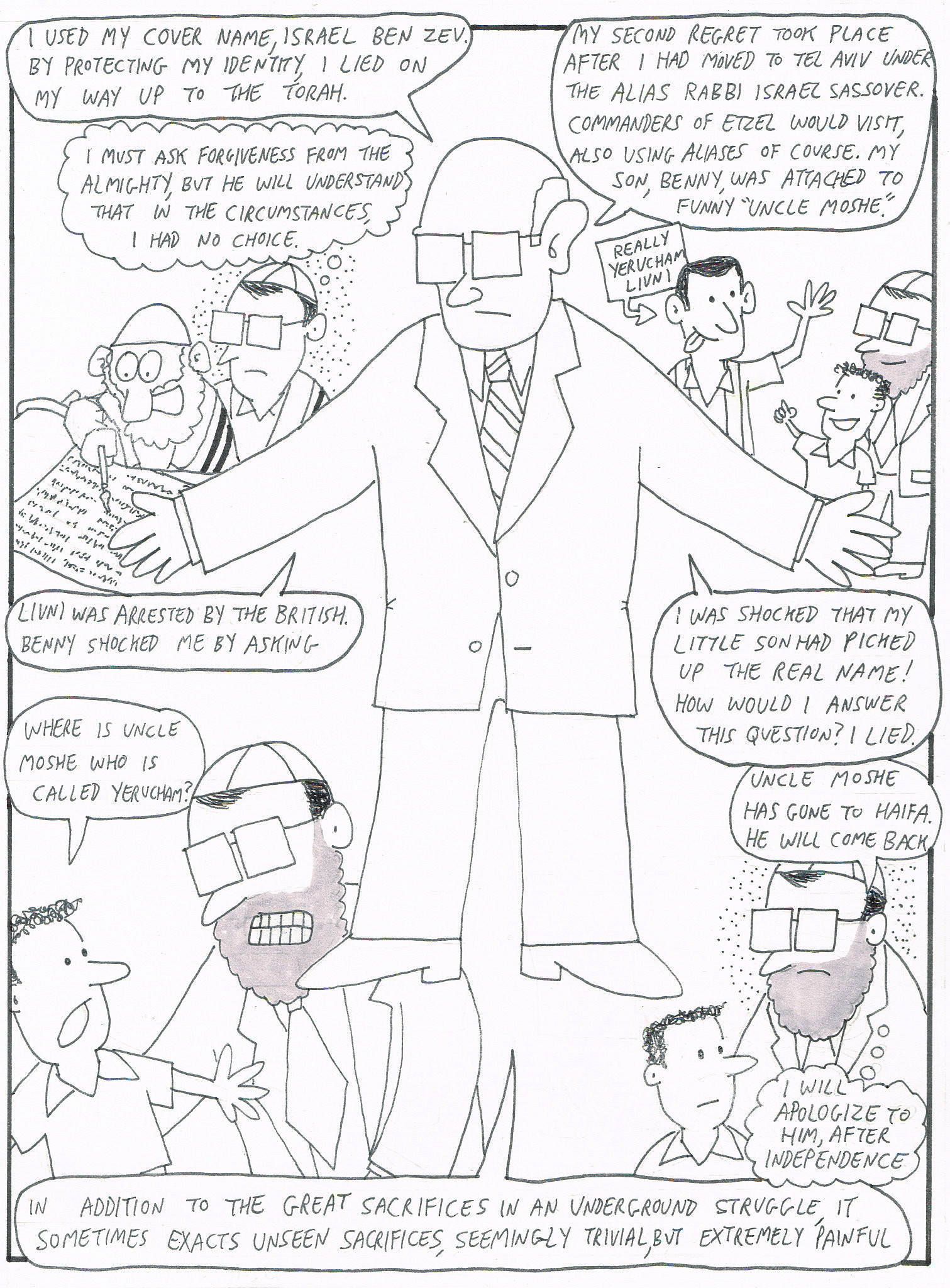 Line 2 Menachem Begin: The Man of a Thousand Faces from the National Library of Israel website. Great pictures! Wanted poster Begin appears at the lop left. Begin claimed the British used the shadowy picture to make him seem more evil. But it also made him difficult to recognize.

Line 3 The story appears in The Revolt, Chapter VIII, “Man with Many Names”:“On the first Sabbath after our arrival I was honored, as befits a newcomer, by being “called up” to the [Torah]. The [gabbai] asked what my name was. I was afraid to mention my first name lest, in combination with my father’s name, it might recall something to somebody.”

Panel 1  The story appears in The Revolt, Chapter VIII, “Man with Many Names”:

“I said hesitantly “Israel the son of Ze’ev Dov.”… [From then on], until I left the underground, I was always “called up” by that name. I must ask forgiveness from the Almighty for dissembling my real name even in Divine Services, but He will understand that in the circumstances I had no choice.”

Panels 2-4  The story appears in The Revolt, Chapter VI, “Army of the Underground”:

“My little son Benny was very attached to this cheerful uncle who used to show him the funniest tricks. He called him Uncle Moshe. Every “uncle” who visited us had his special name for Benny’s use. Children are naturally the greatest enemies of conspiracy. But do parents, even in the underground, always know what their children’s ears pick up? We were always careful, but apparently the three-year-old child once overheard something, for one day he asked me, with a mischievous smile on his lips:

“Father, where is Uncle Moshe who is called Yeruham?”

I was somewhat taken aback by this surprising and dangerous question. On the other hand I could not help a feeling of pleasure at the sharpness of the child.

It is a bad thing for a son not to be able to tell his father the truth. It is even worse when a father cannot tell his son the truth. In addition to the great and obvious sacrifices inherent in an underground struggle, it sometimes exacts unseen sacrifices, seemingly trivial, but extremely painful to have to make.

…May the parents forgive their sons for the untruths they had to tell them for the sake of the essential struggle. And may the sons forgive their parents for the same transgression. Uncle Moshe, my son, was really Yeruham. He did not go to Haifa but to Jerusalem, to the prison, and from there to Acre, again to prison. For fifteen years—so the British said. But Uncle Moshe returned to us—from Acre, not Haifa—fourteen years earlier than the British authorities intended.”

Excerpts from: Menachem Begin, ‎THE REVOLT, The Story of the Irgun on Apple Books