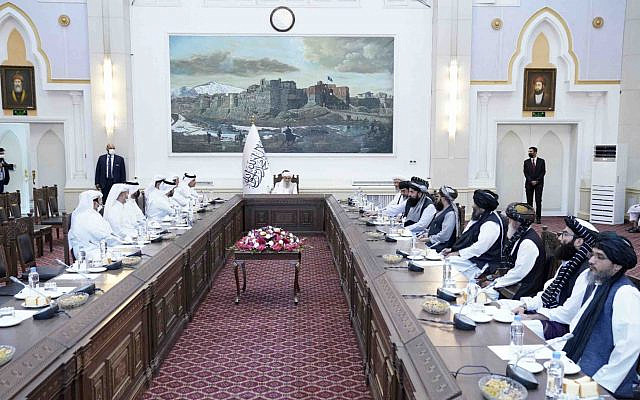 On September 7, 2021, the Taliban terrorist group cocked a snook at the entire world when it announced the names of people who would run its “interim government”. The members of the interim cabinet are a virtual rogues gallery, a who’s who of some of the most wanted terrorists in the world. While 17 of the 33 members of the new cabinet are on the UN Sanctions list, and a larger number are designated terrorists by the US. 90% of the cabinet seats, 30 out of 33 cabinet members are Pashtuns who constitute 48% of the Afghan population and only 3 nominees are Tajiks and Uzbeks (45% of the population). The Shias (around 10%), women (48%), Turkmen and Baluch (together about 5-6%) have all been denied any representation.

The entire cabinet comprises only Taliban and all other stakeholders have been excluded. Significantly, the Haqqani Network has also been given a major stake in the new Government and holds five key positions. Sirajuddin Haqqani, who has a $10 million bounty on his head is the Minister of Interior; Abul Baqi Haqqani the Minister for Higher Education; Maulvi Najibulla Haqqani, Minister for Telecommunications; Khalil-ur-Rehman Haqqani, Minister for Refugees; and Abdul Haq Waseq, as Chief of Intelligence. In fact, the Deputy Head of Intelligence Mullah Taj Mir Jawad is a key member of the Haqqani Network.

Having thrown in the towel, and thrown the Afghan people to the wolves, all that the international community could do is mumble about the non-inclusion of a single woman in the government. It was bizarre that the “Great Powers” and the so called emancipated West was not troubled by extremist and dangerous terrorists forming a government in Afghanistan, but was concerned over the exclusion of women from the government. In other words, it was almost as though if a woman had been given a cabinet position, the government of terrorists would have been totally acceptable.

Clearly, the West, and in particular the US, had deluded itself into believing that the Taliban would honour all the pledges made and assurances given. They took everything the Taliban said at face value. They kept saying everything that the US wanted to hear – we do not want to monopolise power, we will share power with other stakeholders, we will have an inclusive government, we will not allow our soil to be used for attacks against any other country etc. This was exactly what the Pakistanis have done over the last two decades, during which they pretended to be ‘partners and allies’ of the US in the War on Terror and a strategy now Turkey excels in at the NATO.

Anyone who had studied the Taliban, their ideology, worldview, knew that they there was a wide chasm between their words and deeds. Desperate to exit Afghanistan, the US spin machine amplified the Taliban dissemble to give an impression that the world was dealing with a Taliban 2.0, reformed, which would want to walk in step with rest of the world. Now that the Taliban are in power, they have shed all pretence of being ready to accommodate other stakeholders in the government. And why would they not? After all, they are the victors and under no obligation to share the spoils with the losers. They believe that they have not got power on a platter but have won it, legitimately.

The world needs to come to terms with the fact that the concept of a reformed Taliban is an oxymoron. Anyone who expected them to behave like some kind of enlightened nation builders who are magnanimous enough to include their opponents in government as part of a national reconciliation, is living in an alternate reality. The Taliban’s Islamic Emirate is not a democracy that seeks to agglomerate diverse ethnicities, aspirations and interests; it is a theocracy that seeks to enforce and spread its toxic ideology – an Islamic Khmer Rouge that is violent, intolerant and anti-modern. It will embrace modern technology only to the extent that it advances its ideology – TV is acceptable but only to air Islamist propaganda, social media is useful for the same purpose, the West is evil but Western weaponry is acceptable because it helps to solidify control.

This means there was never any intent of an ‘inclusive’ government, inclusivity limited to factions of the Taliban and their allies. In fact, the term inclusive was never really defined in the context of Afghanistan. The world assumed it meant that a Taliban dominated dispensation would include representatives of other ethnic groups, women, minorities (sectarian and religious) and political figures from the Taliban’s opposition. The Taliban understood inclusive to mean that they would include non-Pashtun Talibs. By including two Tajiks and one Uzbek, the Taliban believe they have been inclusive. Women in any case are anathema have their limited role in a Taliban run misogynistic society. As a Taliban spokesman said on TV, their only use is to bear and rear children. They are unable to bear the burden of external work and how would a man take orders from a woman?

By insisting on inclusion of women in government, the West seems to be confusing representation with empowerment. Even if the Taliban eventually give a token representation to one or two women in government, it means nothing. It would be unconscionable for the West to start unblocking funds to the Taliban simply because they appoint a woman as a minister and ignore all the atrocities against women that are an integral part of the Taliban ideology. Surely, an all-male cabinet in a government that empowers women and given them the right to pursue their dreams is far better than a government that has token appointees but cloisters women.

The lack of representation for non-Taliban stakeholders is also not surprising. There was never any chance of anyone from the previous governments being given any position. In any case, Hamid Karzai who is a former President or Dr Abdullah Abdullah who has served as Chief Executive, or any of the other high profile leaders from the ‘ancien regime’ would not agree to occupy a lower position in this government. People from their parties or groups could have been considered, but the Taliban clearly do not feel the need to reach out and make a broad based government, in part because they fear it could lead to dissent within the Taliban rank and file and their support base.

Clearly, the last few weeks should have disabused everyone about the nature and character of Taliban 2.0, which is nothing but a continuation of Taliban 1.0. Even the head of government is the same person who was heading the Taliban cabinet when 9/11 happened. The only thing that has changed is that the Taliban have learnt from their Pakistani patrons how to string the US along. Hence, the deception of ‘transitional’ government, leaving the eternal optimists in the Woke American establishment with the hope that over a few months the Taliban government will become ‘inclusive’, a thesis the Pakistani Prime Minister Imran Khan has now started to peddle. What is often forgotten is that even in the 1990s most of the ministers with “acting” ministers. That is just the way the Taliban do business. If indeed the international community would like to see real change, then it must set clear metrics and parameters on the basis of which it will judge the Taliban. To give any assistance, even humanitarian assistance to this regime which includes the Haqqani Network – “the veritable sword arm of the ISI” – without insisting on certain minimum standards of acceptable behaviour and policy measures would only end up strengthening the Taliban without any substantive change in their behaviour or functioning and reinforce the sense of triumph in Islamabad. Having abandoned Afghanistan and Afghans, to now accept the abominable administration of the Taliban, and to fund, recognise, legitimise such an appalling notion of government would only compound the travails and tribulations of the citizens of this hapless country, endangering society in South Asia and having already enthused Islamic groups in the Middle East and the Sahel.